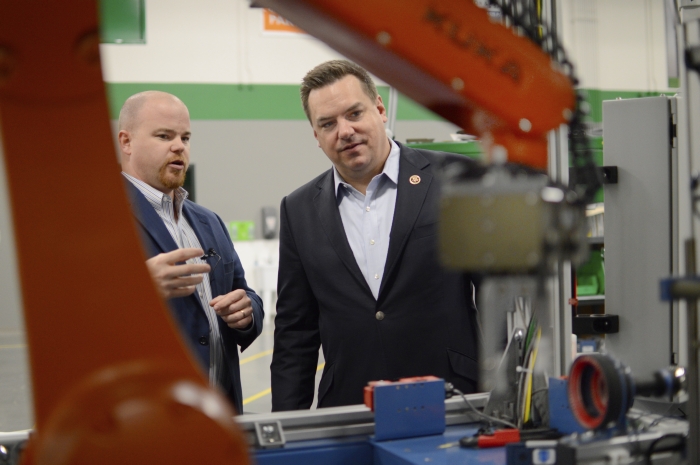 One of Rowan County’s three congressional representatives traveled from Capitol Hill to Main Street on Tuesday, touring one of Salisbury’s most tech-savvy companies.

U.S. Rep Richard Hudson visited Integro, saying his reason for the visit was to learn more about businesses in the 8th Congressional District.

“My top three priorities are jobs, jobs and jobs,” Hudson said. “As congressman of this area, I want to know as much as I can about the businesses in this area. We’re visiting a really exciting business here in Salisbury that’s a cutting-edge technology company and providing great jobs.”

Campion showed Hudson the process behind some of Integro’s work, then guided Hudson across Integro’s shop floor, a relatively quiet space that was sparsely filled with machines the company uses. The company uses vision technology and provides software for robotics.

The computer automation used by Integro, Hudson said, doesn’t eliminate jobs, but rather serves as a supplement for other, local companies.

After the tour and computer presentation, Hudson joked about the science needed for Integro’s operations — “for a history major it’s something I can’t even comprehend.”

After a tour of the shop floor, Integro employees showed Hudson a computer demonstration of some of the company’s machinery and process. During discussions, Hudson also tossed around a couple ideas for future Integro partnerships in other industries, such as NASCAR Racing.

“I’ve spent lots of time visiting businesses in my district doing what they do,” Hudson said. “The more I can understand the challenges they’re facing and the opportunities out there, the better representative I can be. I believe in supporting local companies and helping them to grow jobs.”

After the tour, Hudson said that visiting businesses in his district helps to provide real-world examples when debating bills and issues on the U.S. House floor.

Specifically, Hudson referenced a 40-hour work week bill that passed last week. The bill changed the requirement for full-time work hours from 30 per week to 40 per week. As an example, he talked about a woman he met last year who needed to work three jobs to pay her health-care bills. Hudson said the woman’s husband was unemployed and unable to find a full-time job.

“It’s just examples, when we’re having discussions, I can put a real face on real examples when I advocate on behalf of the people who elected me,” he said. “The fact that (Integro) is in Salisbury is an incredible source of pride for me.”

Integro is located in the Salisbury Business Center on South Main Street.