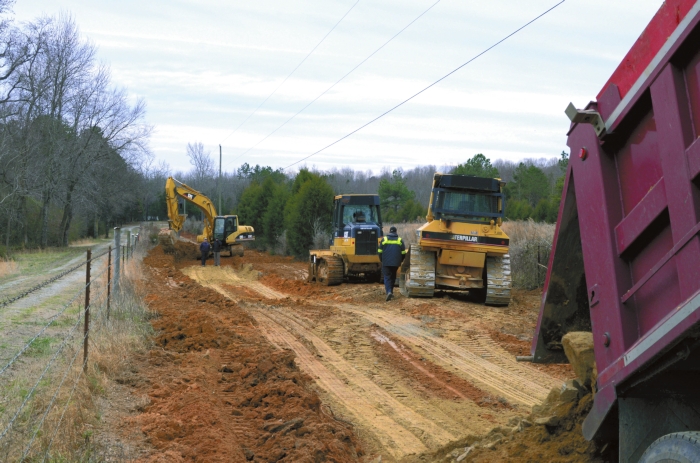 For the past four years, Sue Files walked the length of her ¾-mile driveway twice a day. In the dark. In the cold. In the mud.

The dirt road leading to the house she shares with husband Fred and two grandchildren had become impassable via car. Without the resources to repair it, Sue walked it.

She’s been a housekeeper for the Novant Health Rowan Medical Center critical care and intermediate care units for the past 20 years. When her co-workers heard about what she was doing, they decided to do something about it.

Calling on numerous friends from local hauling, paving, grading and landscaping businesses, the nurses and other staff members from these two units gave Sue what she considers the best Christmas present she ever got — they repaired her driveway.

The project was supposed to start Dec. 22, but due to weather delays, crews didn’t get started ’til Jan. 2. They finished Jan. 9 after five work days.

Clearly, Sue is committed to her work at the hospital.

“We’re all there for the patients,” Sue says. “I love what I do. I’m 65, and I probably could retire, but I love it so much. I support the families there as much as I can, because there’s a lot of things I can’t do. But I try to keep families as comfortable as possible. For example, we have free coffee there, but if they don’t have cups, free coffee means nothing to them.”

So Sue is happy to fetch cups, or ice, or water, or whatever families need.

But she never asked for help with her driveway.

“It was difficult at times, and it got frustrating,” she says. “I do what I have to do. I’ve got to work.”

Up until the driveway was fixed, Sue brought groceries and other household items in as best she could. Her grandsons, 20 and 21, often helped. Fred has faced multiple health challenges over the years, and just returned home mid-January after having a hip replacement.

Two of the nurses had been to Sue’s home to deliver a stove a couple of Christmases ago and the road was bad then, and just got worse.

“There was nothing I could do about it,” Sue says. “Every morning, I’d take my lunch pail, my shoes and a change of clothes in case I fell.”

She fell more than once when it was muddy. She decided when the day came she couldn’t get in and out of her house, she’d leave.

Now she won’t have to.

One day in mid-December, Sue was called to the critical care unit to clean up a “spill.”

When she got there, she found a group of co-workers waiting for her. One of the nurses, Kristin McDaniel, presented her with a note.

It read, in part:

“As you already know, you are a vital part of our CCU team. We love having you work beside us in the unit. You are a hardworking individual and never complain, no matter the task. Your positive outlook on life is infectious and we couldn’t be more appreciative of everything that you do for us.

“A couple of years ago, we knew that your driveway was in desperate need of repair. With your husband’s health problems and you ultimately being unable to even get your groceries down to your house, we felt that we needed to reach out to our community and see what they could do to help us.

We have put together a Christmas surprise for you. WE ARE FIXING YOUR DRIVEWAY!”

“I was just in amazement,” Sue says. “I couldn’t believe anybody was gonna do that for me.”

“It was more than I could handle,” Darrell says, “so we kinda had a coalition working on it.”

Ultimately, about 30 people worked on Sue’s driveway. They used bulldozers and track hoes and dump trucks and track loaders, and even a paving machine that Darrell used to spread the gravel efficiently.

What they thought would be a two-day job turned into a five-day project.

“It was a much bigger project than what they expected,” Kristin says.

The crew completely leveled the road and essentially started over. They worked in brutally cold temperatures, but no one complained. The final day of the project, Jan. 9, Domino’s on West Innes Street delivered free pizza to some 20 workers who didn’t want to stop for lunch.

“The amount of food they brought was ridiculous,” says Jeff Motes, a certified nursing assistant who took photographs as the project progressed.

The project hit only one snag. And it was a pretty big one. Not long into the project, crew members soon realized they’d need more gravel — a lot more. Some 230 tons had already been donated, but about that much more was needed, at a cost of $5,000.

Jeff contacted a physician friend, who in turn contacted Rick Parker. He directs the hospital’s foundation.

Turns out the hospital has a fund to assist its employees. Through the Oestreicher Fund, the hospital donated the money needed for the additional gravel.

There was much excitement as crews poured the last bit of gravel, Jeff says. “It made it a great experience. Sue literally told every single person how much she appreciated it. We just wanted her to be able to get up and down her driveway.”

“The fact that somebody would walk that distance every day to make ends meet is amazing,” Kristin says. “None of us ever knew it was that bad. Sometimes, we get so bogged down in taking care of patients that that’s all we think about. We don’t see other needs. This allowed people to come together for a common goal.

“I never thought when we started this project it would be to this extent. It was the right people in the right place at the right time to bring it all together. It’s a life-changer for Sue. Things are possible because people are willing to help.”

“It was our own Christmas miracle,” Jeff says.

“It went good,” Darrell says. “It was a little more work than everybody thought it would be.”

Altogether, Darrell estimates the project is worth $50,000.

“From the beginning,” he says, “we knew we were doing something good. There was an extreme need there. It’s fun when you can help someone.”

“It’s a statement to the quality of our employees,” says Dari Caldwell, Novant’s CEO. “They’re such loving, caring people, and they are concerned about their fellow human beings. We’re like family here. I was just so proud of our employees, and the way they stepped up to find a solution to a problem.”

For her part, Sue is now enjoying sleeping later every morning.

“Yesterday morning, I left 10 minutes before my shift,” she says, parked at the end of her beautiful driveway one recent afternoon. “I could’ve never done that. It’s just been awesome. People asked me, have you won the lottery? And I say, yes, in friendship.”

This Christmas gift, Sue says, will never be topped.

The gift of friendship. Sue Files says the repair of her driveway facilitated by co-workers at Novant Health Rowan Medical Center was the best Christmas present she’s ever received. Susan Shinn, for the Salisbury Post.