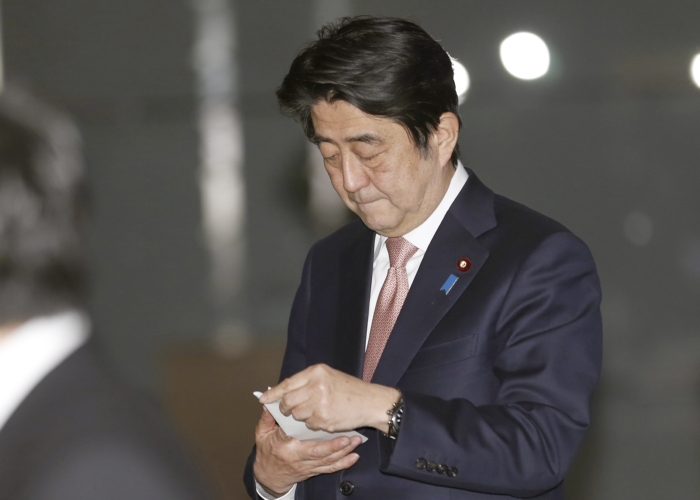 Japan's Prime Minister Shinzo Abe sees a memo before his briefing to journalists following a meeting at the prime minister's official residence in Tokyo Wednesday, Jan. 21, 2015. Japan is doing all it can as it races against time to free two hostages the Islamic State group is threatening to kill within 72 hours, Abe said, vowing never to give in to terrorism. Abe returned to Tokyo from a six-day Middle East tour slightly ahead of schedule and convened a Cabinet meeting soon after. (AP Photo/Shizuo Kambayashi)

Obama’s State of the Union address used economic successes to leverage his position over the GOP which now fully controls Congress.

2. OBAMA OVERSELLS “RISE” FROM THE RECESSION

AP’S Fact Check finds that seven years after the downturn, household income hasn’t yet recovered and the job market is adding low-paying jobs.

3. JAPAN RACING AGAINST TIME TO SAVE HOSTAGES

Prime Minister Shinzo Abe says his country will never give in to Islamic State terrorists who threatened to kill two Japanese captives within 72 hours if not paid $200 million ransom.

Israeli police are calling the assault a “terror attack” that comes after several others in which Palestinians used knives, acid and vehicles as weapons.

The men are accused of providing logistical support to one of the slain terrorists, Amedy Coulibaly.

The U.S. has leapfrogged China as the world’s most important growth market, according to a survey of CEOs.

7. CUBA LOWERS EXPECTATIONS ON EVE OF US TALKS

While Obama hailed restoring relations with the Cold War foe in his State of the Union address, Havana is cautioning that a full relationship won’t come so quickly.

The government will pay a New York woman $134,000 after setting up the bogus page as part of an undercover drug investigation.

9. HOW SAUDI TRADITIONS ARE BEING CHALLENGED

Single women in their late 20s and 30s are seeking careers and independent choices that put them at odds with tribal mentalities in the conservative kingdom.

Conservatives — a seldom catered-to demographic — have been a key to the film’s strong ticket sales.