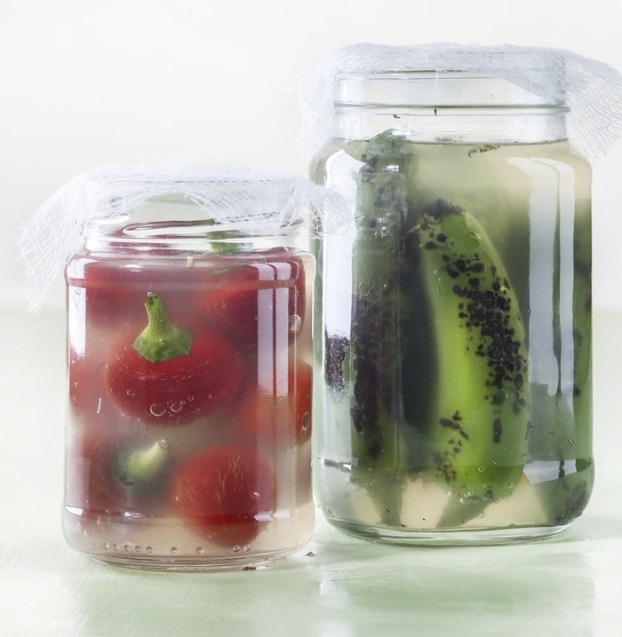 Smoke is everywhere as a flavoring agent, even in specialty smoked sugars. (Bill Hogan/Chicago Tribune/TNS)

By Judy Hevrdejs Chicago Tribune Food forecasters and culinary prognosticators have spoken. Bored by too-sweet eats? Sour foods — pickled and fermented — are moving onto the plate to save our taste buds in 2015, says J. Walter Thompson, the marketing communication folks. Bitter is big, too, with darker coffees, deeper chocolates and cruciferous veggies joining the mix, Technomic's food industry researchers say. Speaking of veggies, you may soon put more hybrid versions on your shopping list, such as Kalettes (kale plus Brussels sprouts) or broccoflower, a marriage of — if you have to ask, you don't know your vegetables. If you're grumbling, "That doesn't sound like real food," get this: Expect more foods that look and taste like the real thing but aren't, i.e. eggless Just Mayo from Hampton Creek Foods and tomato sushi from San Francisco chef James Corwell, say the JWT folks. And you may want to make room next to the food processor and juicer in your kitchen: 3-D food printers geared to the home cook are on the horizon, reports online news service Food Navigator-USA. Here's what savvy food folks say we'll be cooking and eating in 2015: Hybrid veggies: You'll hear a lot about them, "but they're going to have a very small presence in our lives," says Brian Wansink, director of Cornell University's Food and Brand Lab and author of "Slim by Design: Mindless Eating Solutions for Everyday Life." "They can't be produced on the scale that will make them affordable to most of us, and their health benefits are marginal compared to just taking broccoli or kale or broccoli and kale separately. ... (But) anything that makes vegetables more exciting is good." Fermented food: "We're seeing it go more mainstream, from sauerkraut to using kombucha or kimchee. These products are used not just as a condiment but rather as the main course," says SupermarketGuru's Phil Lempert, a food marketing expert. "While they've been out there, there will be an increased focus where people are going to understand that it can aid digestion." Kitchen mentors: Cooking schools have evolved. "It's more about having people who can empower you, saying, 'Here's why you use the shallot,' and not somebody just saying, 'Use a shallot, chop it up and whatever else,'" Lempert says. "It's a much more holistic approach to cooking foods." Spice it up: New spices and sauces turn common eats exotic. Expect companies to develop Shake 'N Bake-type bag mixes for, say, green beans or cauliflower, Wansink says. "It's also what we can do as cooks" — such as he does, shaking veggies in a bag with seasonings before roasting them. Sriracha, the new ketchup? Expect more flavors, fruits and vegetables unique to Latin America, but expect Asian flavors (to go with our ramen appetite?) in the home mix as well, says Darren Seifer, a food and beverage industry analyst with NPD Group, a market research company. Their "kitchen audit" found Sriracha in 9 percent of homes. "However, when you look at homes where the head of household is younger than 35, about 16 percent have Sriracha. ... It's now a household staple." Call it combo cooking: Convenience foods once meant a frozen dinner or entree, trimmed prep, almost-zero cleanup. Evidence shows that meaning is shifting to include an element of freshness, Seifer says. "Now it's 'How can I achieve freshness while still getting out of the kitchen in a short amount of time?'" Millennials using fresh items doesn't mean "they want to be or are even becoming home chefs by any stretch of the imagination." It does mean they may reach for liquid eggs (cuts cracking time), then add their own flavorings. Think craft foods: Craft beer helped some big brewers, "whether they made it up, bought it, acquired it, whatever," says Lempert — for example, Anheuser-Busch's purchase of Goose Island Beer Co. "We're starting to see the same thing happen in food. ... We're going to see a lot more locally produced, limited distribution brands where they finally realize that every product that they make doesn't have to be bought by everybody in America." Same-day delivery: Joining Peapod and Amazon Fresh, "Google Express is putting every food retailer in the same-day delivery business," Lempert says. That, in turn, changes how we buy food. "We're not going into a supermarket 2.2 times a week." Smoked foods: Restaurants and bars are already doing it. "Smoked flavor makes foods more complex," Lempert says. Smoked cocktails, butters, vegetables and even products that have been on the shelf for a while (fire-roasted tomatoes) "are going to rise dramatically in the next year," he says. Clear the counters: "People are going to start understanding that how they set up their kitchen, how they serve food and where they place food is the biggest determinant of how healthy they eat," Wansink says. "Small adjustments — getting all food off the counter and only having a fruit bowl on — will do more to influence how people eat in 2015 than any other thing."