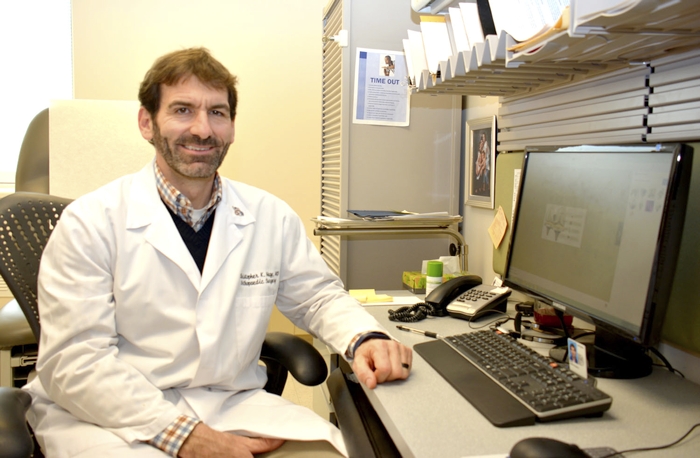 Elliot Crawford, an Army veteran, has made many jumps from a plane while serving in an Airborne unit in the Army, but this one was different. As he came to land on the ground, his foot struck on a stone. The awkward nature of the landing forced his knee to buckle. He was injured, but he went on to complete a 4-mile road march even after injuring his knee.

He’s lived with pain and a decreased quality of life for years as a result of that injury, but he’s hoping that will be a thing of the past thanks to his recent knee replacement surgery. Crawford received the first total knee joint replacement at Salisbury VA Medical Center on Jan. 5. This marked the beginning of the VAMC offering total joint replacements for knees and hips.

“Since I’ve gotten out of the military, this has gotten worse over time,” he said. “I have a 3-year-old daughter, and this will help me be able to keep up with her. I want to be able to spend more quality time with her, where I couldn’t when I was always in pain.”

Dr. Chris Nagy, orthopedic surgeon at the Salisbury VAMC who performed the operation, said there are several factors that determine if a patient is suitable for a joint replacement.

“I tell patients that you don’t do a joint replacement based solely on what an X-ray shows. You replace someone’s joint based on how it’s affecting their lifestyle,” he said. “Of course they have to have the X-ray findings to support replacement – X-rays are a piece of the puzzle, but often times I’ll tell patients, ‘I’m not going to tell you when it’s time to have a replacement; you’re going to tell me.’ Basically, when it reaches the point where you aren’t doing things that you should be doing at your age, it’s time to consider joint replacement.”

Nagy said this was the case for Crawford, who is only 45, but had severe arthritic problems with his knees generally seen in those in their 70s.

Another factor that is weighed is the patient’s Body Mass Index.

“If you carry an extra 25-50 pounds of body weight, or more, that’s going to put extra stress on the replacement. We have research supported criteria for which a patient may be rendered an unacceptable risk for knee or hip replacement because of excess weight or other health risk factors. The more weight one is carrying and the more risk factors present – the more likely an individual may suffer a poor result and experience a poor outcome,” Nagy said.

Once a patient goes through joint replacement surgery, they start the recovery process.

“Typically, physical therapy will come out to the patient’s home two to three times per week for about three weeks after a joint replacement. If they are progressing well after three weeks – that’s great!” Nagy said. “If they’re not, we’ll send them to outpatient rehab. A safe estimate is six to eight weeks to have acceptable ambulatory function, but it may take six to 12 months to fully recover and get your strength back.”

“In general, many people think we have all of the answers in medicine, but we don’t. There are some things we can do to help you, but that’s only half of the patient’s success,” he said. “The other 50 percent is on the patient to exercise, go to rehab, and get up and move. It’s not just the magic of putting in a replacement that will change one’s life; it’s being an active participant in one’s recovery and wellness that’s going to make a positive change in one’s life.”

Nagy, who’s been a practicing orthopedic surgeon since 1996, said those positive changes can also make a huge difference in how long a joint replacement will last.

“They can last up to 30 years, pretty reliably 15-20 years. Much of it depends on how someone treats their replacement. If you treat your joint replacement well, it will treat you well,” he said. “One reason younger people sometimes don’t do as well with a joint replacement is because they demand more from it. I tell them, ‘It’s metal and plastic, and if you abuse it, it will wear out quicker.’”

Nagy said he and his team take a lot of pride in providing this new service to Veterans.

“It’s more than just performing a surgery, it takes a team effort to have a successful joint replacement program – it’s nursing care, it’s physical therapy, it’s prosthetics,” he said. “You want to create a program that you can be proud of, and you want it to be done properly. We’ve instituted a lot of cutting edge technologies into our joint replacement program. We offer the same level of care that individuals will experience at any other qualified facility.”

Salisbury VA Medical Center Director Kaye Green added that the entire leadership team is excited about offering joint replacements for Veterans along with other more complex procedures that have begun in recent years.