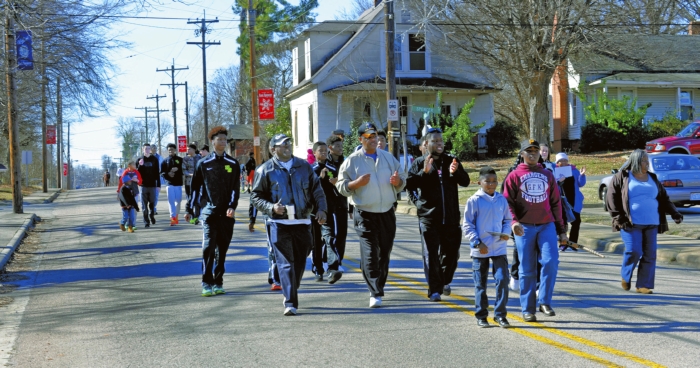 East Spencer citizens and children on bikes move up Long Street in a half mile walk to the fire department as part of the Kids for King event. photo by Wayne Hinshaw, for the Salisbury Post

Traffic on Long Street in East Spencer slowed to a halt Monday afternoon as children, teens and adults biked and marched the half mile from the Dunbar Center to the East Spencer fire department.

Mayor Barbara Mallett said the town’s goal was to target children with the event to encourage them to get out and enjoy their freedom and to learn about the sacrifices of the past.

“I think Martin would be pleased that were thinking about our next generation,” she said.

As dozens of people made their way down the street, children on bikes raced ahead while adults followed on foot behind – North Rowan High School’s basketball team even joined their ranks.

A small group of older adults sang old spirituals as they deliberately marched toward the fire department. One man held up a sign that said, “The march continues.”

“Even though we can’t march, we can rid,” Mallett said.

Once the group reached the fire department, Tiffany Miller, associate minister at Mount Zion Missionary Baptist Church, challenged those in attendance to realign their priorities as a community.

“What is the status of your dream?” she asked.

She challenged parents to focus on their children’s academic performance and on doing the right thing.

After the message, the students cruised around the parking lot on their bikes, and the town gave away nine new bikes donated to the police and fire departments.

Coach Andrew Mitchell, an East Spencer native, was there with the East Rowan men’s basketball team.

“We all need to know our history,” Mitchell said. “A lot of these guys may not understand the sacrifice.”

He added that the players are role models for children in the community, and he wanted them to be visible at the Town’s Martin Luther King, Jr. Day event.

“It says a lot about these young guys,” Mitchell said, adding that they weren’t forced to attend.

Mallett said she was pleased with Monday’s balmy weather.

“We normally have our own celebration on the Saturday,” she said, but with the other events scheduled this past weekend, they decided to hold Kids for King Monday.

The idea apparently paid off, she said. “It looks like its grown threefold,” she said.