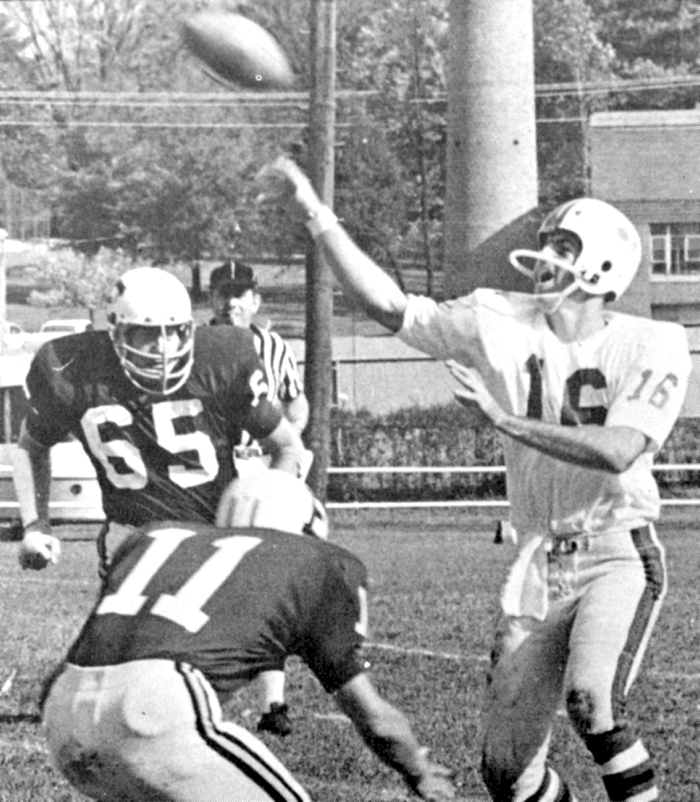 Catawba’s 1966 football team was only 5-5, but it was a break-even team that rewrote record books and thrilled fans with lasting memories.

Those Indians of 1966 were responsible for three of the iconic games in program history. There was the “Great Scott” game against Western Carolina on Oct. 8, the last-second triumph on the road at Appalachian State a week later, and coach Harvey Stratton’s “Bear Gun” that brought down Lenoir-Rhyne on Thanksgiving Day.

“Great Scott” was John Scott, the quarterback  instrumental in those legendary victories. Scott died Wednesday, Jan. 7, in Somers Point, N.J. He was 71.

Scott was a four-sport athlete growing up in Williamstown, N.J., shining  brightest as a football tailback.

Catawba had a strong team in 1965, producing a 7-3 mark and outscoring opponents by 101 points. The defense was stout, and the Indians had gifted offensive players in Scott, voted the Most Valuable Back in the Carolinas Conference as a junior, and sensational Winston-Salem product Ike Hill.

Prior to the 1966 season, Catawba was picked fourth in the eight-team Carolinas Conference, a league that included Lenoir-Rhyne, Western Carolina,  Guilford,  Elon, Appalachian, Newberry and Presbyterian.

But with Hill not in uniform in 1966 ( he would return with a vengeance from 1967-69), Catawba struggled. The Indians hit rock-bottom with an awful 46-0 loss at Emory & Henry that dropped them to 1-2.  The top three running backs were hampered by injuries, and Scott was sacked so often against Emory & Henry that Stratton had him finish that game as a receiver.

At the Monday practice following the Emory & Henry debacle, Stratton introduced the “shotgun” offense to his team. The shotgun was  immediately dubbed the “desperation formation” by skeptics, but the change suited Scott’s talents.

He took snaps from a distance of 8 yards behind center Ed Koontz, a future AFL player. That made Scott harder to sack and made it easier for him to spot pass-catchers Rad Kivette and Drew Buie. It also provided space for Scott to improvise and use his legs — and the former prep tailback could run.

But Western Carolina’s visit to Catawba produced a staunch defensive effort by the Indians and Scott’s finest hours. The Catamounts were unprepared for Scott in the shotgun, and he filled the air with passes and broke school and conference single-game records. Scott ran or threw on every Catawba play in the first half.  In a 24-7 victory, Scott threw 56 times and completed 34 passes for 338 yards, crazy numbers for that era. He ran for two touchdowns and passed for one.

Scott’s numbers could’ve been greater. He had  a 63-yard touchdown pass called back and he had two sure TD passes dropped.

Stratton called the Western Carolina game his greatest win. “I didn’t think we could beat them,” he told the Salisbury Post’s Horace Billings. “But I hoped we could.”

A week later, Catawba won, 18-17, in Boone. The game looked lost, but Scott, who was 18-for-33 for 208 yards, orchestrated a heart-pounding drive in the final minute. Then Bob Petters kicked a clutch field goal on the final play to ignite a celebration.

But opponents adjusted to Catawba’s shotgun, and the Indians dropped three of their next four, including tight ones against Elon and Guilford.

The season concluded with the traditional battle with Lenoir-Rhyne. The Indians were at home. The Bears were in first place, looking to clinch an outright league championship, but Stratton reached into his bag of tricks again.

Catawba held its own in a physical first half, and when the Indians got the ball for the first time in the second half, they unveiled one of the more bizarre offensive formations in football history.

Six linemen were bunched together with one back behind them. Seventeen yards distant from that pack of linemen stood Koontz, the center, with Scott stationed 11 yards behind Koontz. The other two backs were flanked behind Scott.

This  was Stratton’s “Bear Gun,” something he’d seen first in a magazine. It was the strangest of spread formations, but perfectly legal with seven on the line of scrimmage and four backs. A benefit of the odd alignment was that Koontz, a fine athlete who  played both ways, was on the end of the line. Wearing No. 89, he was an eligible receiver. Twice, Scott would pass to his  sturdy center for big gains.

The story has been  embellished over the years, but Catawba actually used the “Bear Gun” formation for only 12 snaps. The Indians went “no huddle” as they had only three plays for that formation.  “Live Bear” was Scott throwing deep. “Dead Bear” was  Scott tossing a screen. “Scramble Bear” relied on Scott to use his wheels if no one was open.

“Scramble Bear” accounted for the game’s key play. Scott dashed 65 yards for a touchdown past Bears, who had every right to be dazed and confused. Scott’s sprint pushed a four-point Catawba lead to 14-3.

Catawba won, 21-11, to salvage a 5-5 season. Lenoir-Rhyne settled for sharing the conference title instead of taking it outright.

Scott  broke conference records for passing yards (1,623) and total offense (1,914) in 1966. He  was an Honorable Mention All-America and repeated as the High Point Athletic Club’s Carolinas Conference Most Valuable Back. The Greensboro Daily News named Scott and Koontz to its  prestigious All-State team.

After his military service, he became a high school coach in New Jersey in 1972. He had a rough season, came back to Catawba as an assistant coach for two seasons, and then returned to New Jersey. He helped mold the Cherokee Chiefs in South Jersey into a perennial championship contender, first as an assistant, and later as head coach. His teams were 89-39-1 in a 13-year head-coaching tenure.

One of Scott’s high school standouts at Cherokee was kicker Randy Brown.  He helped his alma mater recruit Brown and that turned out very well. Brown set records for the Indians during his career (1985-88), was inducted into the school’s Hall of Fame in 2009 and is now a kicking coach for the Baltimore Ravens.

Scott was inducted into the Catawba Hall of Fame in 1983.

The education of Chris Smith