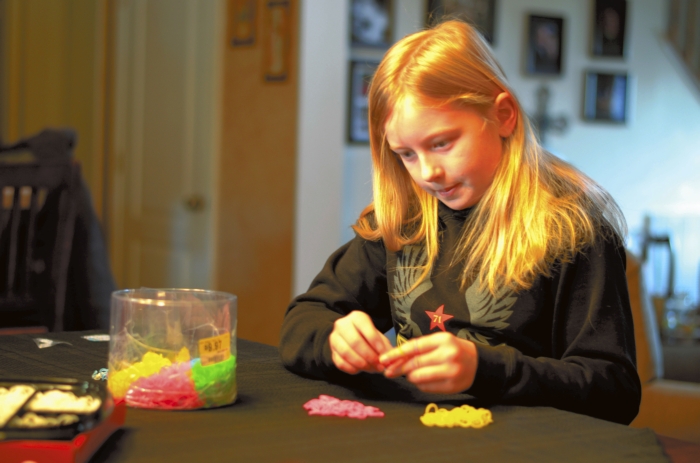 Hugh Fisher/For the Salisbury Post Brooke Torp, 8, started making rubber-band bracelets and offering them for donations to help with the costs of her baby brother Mason's hospitalization. So far, donors from California, Washington and several other states have responded.

GOLD HILL – At the kitchen table in her grandparents’ home, Brooke Torp is busy. It’s Friday after school, and most kids are probably out playing by now – or parked in front of the TV.

Instead, Brooke, age 8, is trying to help her family. Scattered in front of her are hundreds of tiny rubber bands, in every color of the rainbow.

Near them is a small pile of finished rubber-band bracelets – intricately woven herringbone patterns of all those different colors.

Brooke says she enjoys playing soccer, playing in the creek at her grandparents’ house, riding her bike – but there’s something more important to do right now.

She’s got a plan to help her family through a crisis that started about a month ago.

On December 18, her infant brother, Mason, was hospitalized with a severe respiratory infection.

But in babies, RSV can cause serious complications. From Carolinas Medical Center NorthEast, Mason was transferred to Levine Children’s Hospital in Charlotte.

Five-month-old Mason then developed pneumonia, and had to be transferred to intensive care.

Doctors put the baby boy into a medically-induced coma so that he could be placed on a ventilator.

“It was horrible,” said Lacey Torp, mom to Mason and Brooke.

Lacey, husband Mike Torp and their kids live in Salisbury, where Brooke attends Hurley Elementary School. Mike is a truck driver, based out of Thomasville. Lacey is a homemaker.

For almost a month, the family has made trips back and forth to Charlotte to be with Mason in the ICU.

Meanwhile, Brooke has stayed with her grandparents, Roger and Marnee Vanderpol of Gold Hill.

She hasn’t been able to see her brother since he was transferred to Charlotte, where children aren’t allowed to enter the hospital due to concerns about infection.

Brooke knew the family would need money to help pay for the expenses from Mason’s hospital stay. More than that, she wanted to do something to help.

And then, without being prompted, she thought of a way.

At first, Brooke said, she thought of trying to sell hot chocolate – but that would be tough to do.

But then, she said, she thought of rubber-band bracelets.

“The girls at school make them,” Brooke said, as she gathered three colors of rubber bands in little piles on the table in front of her.

Brooke herself learned how to make the bracelets months ago, she said. You can buy “loop & loom” kits at craft stores – little knitting tools, bright-pink plastic looms and every color of rubber band imaginable.

For her project, Brooke chose a simple design. Wrapping three rubber bands into a stretchy cat’s-cradle around her fingers, she shows how a bracelet is made.

And, as she goes on talking, Brooke moves one band, adds another to the ends of her fingers, wraps one around and keeps on going.

In less than five minutes, and without missing a beat in the conversation, she’s turned about 50 rubber bands into a bracelet.

Brooke’s original plan was to offer bracelets for a donation of $1 each – or, for people who live out of town, “$1.50 for shipping.”

“She came up with the idea with my mom,” said Lacey, sitting nearby.

Before long, Brooke was enlisting help from family and friends. She made bracelets during her free time, then taught her mom and grandmother and grown-up cousin, Mike, how to make them.

They’re not as quick as she is, Brooke says, but they can help.

Next, they headed out into the community. Lacey said bracelets are on display at Porky’s restaurant in China Grove, and at the Lucky Turn Around bar on U.S. 29 near China Grove.

Then, they started offering the bracelets for donations via Facebook, Lacey said.

And the orders started coming in.

So far, Brooke’s bracelets have been sent to California, Washington and all over North Carolina, Lacey said.

Near the supply of bands on the table sat a manila envelope, ready to send another bracelet out.

Brooke, herself, has made “about 100, I think.” Friends and family have added more.

The family has a GoFundMe web page for donations to cover expenses related to Mason’s hospital stay, but the response to Brooke’s bracelets led them to create a “Bracelets for Mason” Facebook group, and a separate e-mail address.

Many donors have given more than the $1 Brooke originally asked for, the family said.

Even better news came Thursday, as Mason was able to be taken off the respirator and to leave the ICU.

“And I was able to give him his bottle,” Lacey said.

Brooke, meanwhile, has done all she can to be a big sister from far away.

“She’s read him a story over the phone. She sings to him,” Lacey said.

Mike, sitting at the table across from Brooke, said he’s very proud of his daughter. He wears one of Brooke’s bracelets on his wrist.

“There’s always something special about her that surprises us, every day,” Mike said.

Brooke smiled, and maybe even blushed a little. And, having added another bracelet to the stack in front of her, she took a short break.

It will still be some time before Mason comes home, and before Brooke gets to be a big sister in person again.

Until then, she’s ready to help out the best way she can. There are a lot more rubber bands in the box – a lot more bracelets to make.

To learn more about Brooke Torp’s project to make bracelets to offset the costs of her brother’s hospital stay, e-mail BraceletsforMason@gmail.com or go to the “Bracelets for Mason” group on Facebook.