At Martin Luther King, Jr. Celebration, a call for the community to stand together 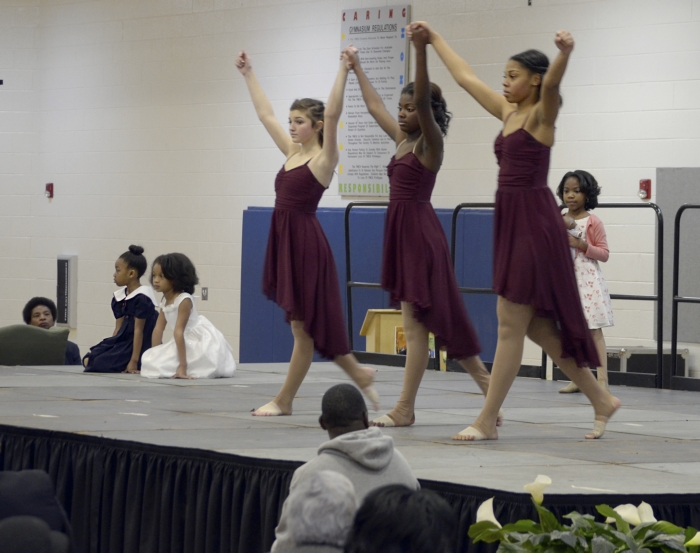 The 29th annual Martin Luther King, Jr. Celebration was organized by the Salisbury-Rowan Human Relations Council, in coordination with local businesses and agencies.

Over breakfast at the J.F. Hurley Family YMCA, speakers paid tribute to King and spoke on this year’s theme, “Separate or Together?”

Several noted that this year’s celebration takes place in a nation that is still divided by racial intolerance and distrust.

India Biggus, president of the J.F. Hurley Family YMCA Black Achievers, said that America’s promise of equality should include all races, creeds and life choices.

And Biggus also said that even some black Americans are guilty of seeing each other as “light-skinned” and “dark-skinned.”

“Dr. Martin Luther King saw everyone as people,” Biggus said, “whether they were black, white or yellow.” She challenged the audience to do the same, and break through barriers in their lives.

Another member of the Black Achievers, Jaylen Brown, questioned the assumptions people make about others.

“If I wear a hoodie, I’m a gangster,” Brown said. “If I wear a suit and change my dialect, I just might fit in.”

Brown spoke of people who fear for their lives because of hatred and intolerance, and called on locals to stand together against inequality.

Carolyn D. Bratton, chair of the Human Relations Council and pastor of Moore’s Chapel AME Zion Church, said the message of unity and justice brought by the morning’s speakers was “very fruitful.”

Bratton estimated attendance at the event at over 450.

Against the backdrop of King’s message of equality and peaceful advocacy for change, the event celebrated diversity not only in race, but in religious traditions.

Prayers were offered by Christian, Islamic and Unitarian Universalist clergy.

In his prayer, Seddiq Behrooz, a native of Afghanistan, asked God for courage “not to let our misunderstandings guide our lives … (or) miss opportunities to see the good in each other.”

After a medley of songs celebrating King’s “I Have a Dream” speech and the Civil Rights movement, Diggs said, “I challenge all of us to make the dream they were singing about a reality.”

Representatives from local government and business were in attendance, including uniformed police officers and firefighters.

Seth Labovitz, of the Human Relations Council, thanked the NAACP and other organizations “working for greater freedom, equality and justice.”

When the Rev. Martin Luther King, Jr. was struck down by an assassin at the age of 39, he joined the ranks of those who had died due to intolerance in the United States.

Set to Joan Baez’s rendition of the song “Birmingham Sunday,” the dance was performed in memory of Addie Mae Collins, Cynthia Wesley, Carole Robertson and Denise McNair, aged 11 to 14.

The four girls were killed in the Sept. 15, 1963 bombing of 16th Street Baptist Church, an African-American congregation in Birmingham, Ala.

The bombing was carried out by members of a Ku Klux Klan group, who were convicted of the crime years later.

As the music played, four girls representing those killed moved across the stage, where their costumes were replaced with angels’ wings.

The audience responded with a standing ovation.

Jenkins spoke of education as “the surest path to upward mobility,” and a force that can eradicate ignorance and violence in society.

Quoting from the Gospel of Luke, Jenkins said that “to whom much has been given, of him much is expected.” He challenged those in attendance to support education and to help those who are disadvantaged “take their rightful place in the global society.”

Lewis recalled seeing change take place in the world, “things I never thought I’d see” – among them, Nelson Mandela’s release from prison, and the fall of the Berlin Wall.

Likewise, Lewis said, those in attendance should work to continue making changes in the world, and breaking down barriers of inequality in today’s society.