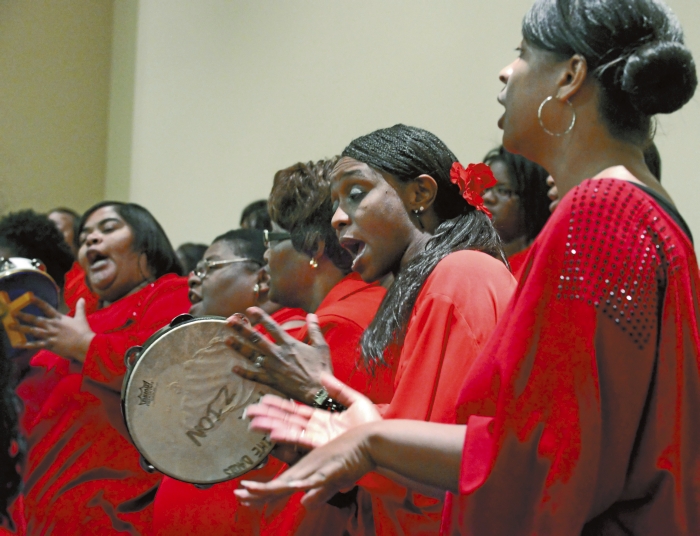 Have we reached the dream yet? Have you thought about it?

The words trickled off the tip of Linda Inman’s tongue as she gave the annual birthday message during Sunday’s Dr. Martin Luther King Jr. Birthday Celebration and Humanitarian Awards Day. Inman, the president of Woman’s Baptist Home and Foreign Missionary Convention of North Carolina, began by speaking of important moments in history.

She described the “I Have A Dream Speech,” by King before invoking modern-day events — protests in Ferguson, Mo., the death of Eric Garner in Staten Island, N.Y., Trayvon Martin’s death in Sanford, Fla.

“Dr. King began to speak to the crowd at the Lincoln Memorial and the sounds of a woman’s voice, Mahalia Jackson, spoke up and said to Dr. King ‘tell them, tell them about the dream,” Inman said. “Mahalia was standing nearby and she encouraged Dr. Martin Luther King to tell the world about his dream. Dr. King left his text altogether at this point, a departure that put him on a path to speak words of the scripture.”

Inman told the nearly filled Mount. Zion Missionary Baptist Church to do everything possible to keep King’s dream alive, but she prompted the crowd to consider if modern-day society had reached the dream King laid out in his famous speech.

She encouraged the audience to speak up for what’s right but in a non-violent way.

“For, when we choose non-violence, not only do we keep the dream alive for Martin Luther King, but we honor God,” she said.

Inman spoke just minutes before the 2015 Humanitarian Service Awards were presented to a trio of honorees from diverse backgrounds. The 2015 award winners were Annie M. Bates, who is a community volunteer; Dr. N. Windsor Eagle, the former principal of Salisbury High School and Jimmy R. Jenkins Sr., the current president of Livingstone College.

In short introductions just before the awards were presented, presenters spoke about accomplishments and community service involvement for each honoree.

“I’m intimidated by this selection and I want you to know that,” Jenkins joked. “I recognize that we have so much work to do. When I think of Martin Luther King and what he stood and the opportunity for me to just be in the march and to do what I do, I give god the glory.”

The several-day-long celebration of King’s accomplishments will continue at 7 a.m. today with the 29th Annual Martin Luther King, Jr. Humanitarian Breakfast at the J.R. Hurley YMCA. The keynote speakers for the event are Jenkins and Catawba College President Brien Lewis. Tickets for the breakfast are $10.

Montessori preschool to open in Salisbury