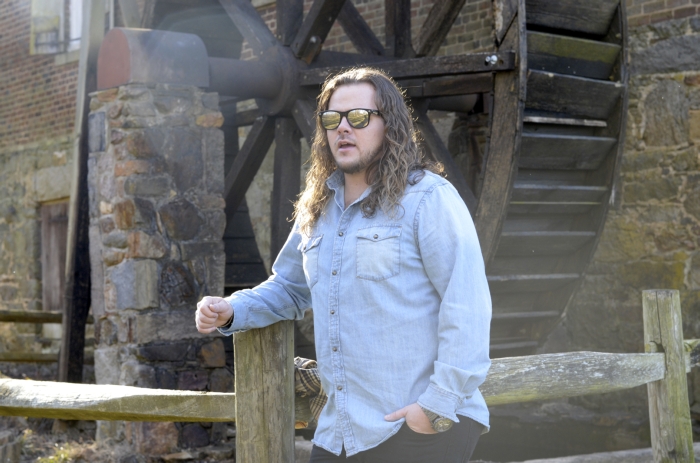 Hugh Fisher/For the Salisbury Post Josh Sanders, a contestant on the current season of "American Idol," talks about memories of trips to Sloan Park during an interview there Sunday. Sanders' father, the late Rev. Darren Sanders, brought his family and parishioners to the park a number of times through the years.

Sunday afternoon, with a chilly breeze blowing, Josh Sanders left his SUV in the lot at Sloan Park and walked down toward the mill and waterwheel he’s known since he was a kid.

The nearly-empty park was a far cry from Kansas City, where Sanders auditioned for the 14th season of Fox television’s “American Idol.”

And it’s a whole lot different from Las Vegas, where Sanders competed in the 11th season of the TV singing competition in 2012.

There are a lot of memories at Sloan Park for Josh. When his father, the late Rev. Darren Sanders, was music director at Charity Baptist Church, the family would come to Sloan Park, Josh said.

“We used to picnic over there by the creekside,” he said, gesturing toward a grassy stretch near the trees. Other times, Josh said, his father would bring groups from church out to the park for singing and fellowship.

Back in 2012, at age 23, Josh was on national TV. He’d been touring, playing bars and clubs with country and rock bands. He was living a dream thousands try for and never achieve.

But it didn’t happen. “I got to almost the top 48 (contestants),” Josh said. “This was the group rounds, in Vegas.”

After first being told he’d passed and would go on to the next round, Josh said the producers called the contestants back. “They said they’d miscounted.”

And Josh was soon on his way home.

The following year, in May 2013, Darren Sanders died. “He was more than just my father, he was my pastor and my best friend,” Josh said.

Within a short span of months, his first cousin and his grandmother also passed away, Josh said.

Josh went back to playing with a local band. He watched his roommate from the 2011 season, Phillip Phillips, go on to win that year’s contest.

In a way, Sanders joked, “it was like always being the bridesmaid.”

This season, Josh Sanders is back on “American Idol,” and competing once more for a prize thousands of people dream of winning.

But he says he’s learned a lot in the last three years. “I know God’s grace is sufficient,” Sanders said. “I know, when I lost my Dad, the world I was living in.”

Much has changed since then, and Josh Sanders said that, no matter where life takes him, he’s keeping God and family first.

There’s a saying the Rev. Sanders used to repeat, Josh said: “It’s not how you fall. It’s how you get back up.”

Sanders said music is what brought his parents together. His father was playing piano when his mother, Renee, met him. “They were high school sweethearts,” Josh said.

And music was a part of Josh Sanders’ life early on. “I was playing music in church when I was six years old,” he said.

Today, his versatility is because of the times he would fill in, and his interest in learning instruments. Sanders said he can play guitar, piano, drums, bass and more.

It was sometimes a rough life, not a very

And there were times, Josh said, his father gave him advice that rang true later on.

His father’s death in 2013 hit Josh Sanders hard. To this day, he said, it’s still tough sometimes. “It’s a different kind of lonely, without him,” Josh said.

After years at Charity Baptist and, later, as pastor of Northwest Baptist Church, Josh said his father touched many lives.

And his father’s passing left Josh wondering what he should do with his life.

“I didn’t know if I wanted to play another note, ever,” Josh said.

Perhaps the hardest part, Josh said, was looking at what could have been. He remembered thinking about partnering with his father, possibly pursuing music ministry.

“I had multiple opportunities,” Josh said. “I was asking myself, what if I had done that? What if I had gone in with him?”

Now, with the passage of time, Josh said he doesn’t have those regrets.

Today, he said, he can see that his life unfolded as it did for a reason. “Things take care of themselves.”

As a child, Josh Sanders would go play with another friend, also named Josh.

That’s where he met the former Kendra McCall.

Years later, Kendra was a single mother, coming out of a divorce.

“After his father’s passing, my brother wasn’t able to get home for the funeral,” Kendra said. “He was home that next weekend and wanted to show his support for Josh, to go to one of his shows.”

Josh Sanders remembers seeing Kendra walk in. “I saw her come in the door, and I winked at her!”

Kendra recalled that her own grandmother had passed away not long before. She kept in touch – “just checking on him,” she said.

Then, she called on him to help her move into a new house. “We’ve been inseparable since I put him to work!” Kendra said.

Within 18 months, they were married. Today, they’re raising four-year-old McKenlyn and they’re expecting another child in July.

“Dad used to say to me, ‘You need to find the right wife,'” Josh said. “And he always said, maybe one with a child, or a daughter.”

Crying a little, Kendra recalled what she said at their wedding: “At eight years old, he was the little boy who would never go home! And now we’re married, and he’s here.”

Today, Josh Sanders says he’s found the balance between his love of music and his desire to share his faith.

“Musically, I don’t have to not play rock and roll, or not be a country artist,” Josh said.

Rather than be solely a “Christian artist,” Josh said he’d rather continue playing the music he loves, and pay attention to opportunities to share his testimony when and where he can.

“Already, the flood of support we’ve received as a family is overwhelming,” Kendra said.

In his current “American Idol” run, Josh said he’s already had a chance to talk to this season’s celebrity judges – one of whom, Jennifer Lopez, said she remembered him from 2012, Josh said.

Josh said he can’t talk about the upcoming weeks’ episodes, which have been pre-recorded in recent months following auditions around the U.S. The latter part of the competition will air live on national TV.

What he did say is that, no matter how this season’s “American Idol” competition turns out, he’s got faith in his future.

And he’s working to live out his faith. As music leader at Mission Baptist Church in Locust, Josh is able to share his talents and his testimony.

“My father’s approach has made me the man I am today,” Josh said. “… Rather than be bitter, and bail on God, I’m seeing things differently.”

Sanders looks ahead toward the possibility of winning one of the biggest prizes in American music, one that could open up many opportunities for him.

“I don’t know what’s going to happen moving forward,” Josh said. “But I know, if you’d asked me three or four years ago, ‘Are you ready to be the Idol?’ I’d have said yeah. But I wasn’t.”

Today, he’s ready. “I want to take care of my mother, help support her, and support my growing family,” Josh said.

Even if he doesn’t win the “American Idol” crown, they are his focus. His fans and friends are behind him, 100 percent, Josh said.

“I couldn’t be more proud of him, that he’s doing this again after all that he’s been through,” Kendra said.

“And that just makes me extremely proud of him, and honored to be his wife,” Kendra said.

“I’ve got a feeling that God’s got a higher purpose for me,” Josh said. “I know that I’m going to do things a little different this time.”

And, Josh said he knows he’s carrying on his late father’s legacy. “I’ve got more of my father in me than just his middle name,” Josh said.