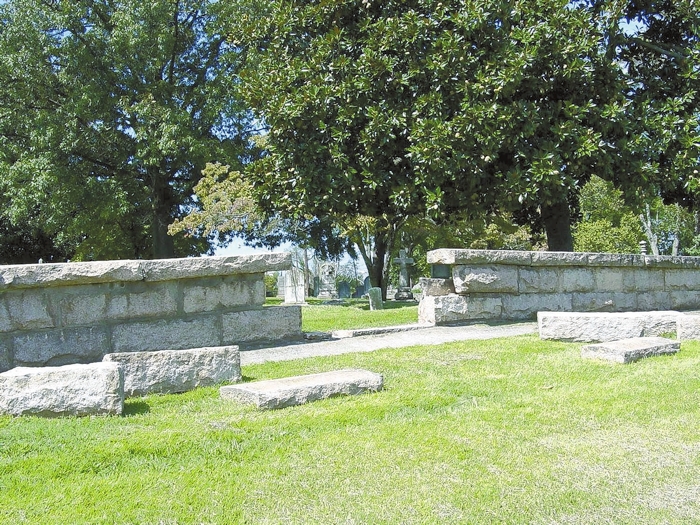 An opening in the wall between the Freedmen's Cemetery and the Old English Cemetery in Salisbury. Post file photo

The tribute was long overdue. The observance of Dr. Martin Luther King, Jr.’s birthday in 2006 was a particularly special day in Salisbury. After years of preparation, the community gathered at Soldiers Memorial AME Zion Church in downtown Salisbury for a beautiful memorial service to recognize and honor some very special people from the past — African-Americans, both enslaved and free, buried in unmarked graves in a cemetery across the street. Deeded in 1770, the name of the cemetery was Oak Grove Freedman’s Cemetery. The site was a part of a larger cemetery parcel which was dominated by the Old English Cemetery, filled with ornate gravestones and monuments for white settlers, citizens and British soldiers. In 1842, wooden paling was put up to separate the two cemeteries, and in 1855, the wood was replaced with a granite wall.

The service that day was the result of a project begun by Waterworks Visual Arts Center a decade before, bringing city planners together with the North Carolina Humanities Council to develop a way to commemorate the site and the people buried there. An artist and landscape architect were selected to address the spiritual, cultural and historic dimensions of the site. The result was a beautiful project supported by many of the local citizens of the city.

The project became controversial because it required that an opening be made in the granite wall. Preservationists argued that the historic wall should not be disturbed. The final decision rested with the City Council. They had to weigh the importance to the city of keeping the wall intact as opposed to allowing some of the granite stones to be moved. As mayor, I was a member of that council and was happy that the decision to change the wall was unanimous. The council had a solid history of being advocates for historic preservation, but the consensus was that the message sent by this decision was more important. In a decision made in the present time, the city should show its support in this symbolic way. The opening was a sign that, in 2006, the wall had come down between the races.

Preserving our history is important, although it can be painful. We learn from our mistakes, and we have the opportunity — and responsibility — to correct them in the present. No words can describe the emotion that winter day in the church, surrounded by descendants of former Salisburians who had never been properly recognized at their death. On this special day, they received the honor they deserved.

Susan Kluttz is secretary of the N.C. Deparatment of Cultural Resources and a former mayor of Salisbury.

Cal Thomas: Why all the love for George Clooney?