Montessori preschool to open in Salisbury 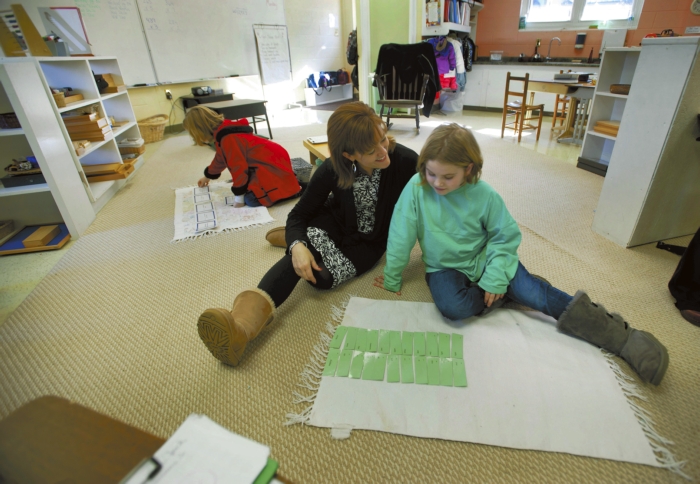 Myra Tannehill spent years as a college professor at Appalachian State and Pfeiffer universities, but when her son JP was born two years ago, her focus on education shifted drastically.

“I want him to have Montessori,” the Salisbury native said.

Rowan County has a number of good child-care options — 15 four- and five-star facilities.

With 9,000 children under the age of 5 in the county and more coming every day, however, Tannehill said there are only 2,000 openings each year in those four- and five-star programs.

Montessori education is a world-recognized system of excellence, she said, adding that people may not know exactly what it is, but they’ve heard of it, and they know it’s excellent.

When it was time for her to go back to work after having JP, Pfeiffer let her bring him to work, but as he grew, the arrangement became more problematic.

“When he got to be a toddler, I couldn’t take him to work,” Tannehill said. “That’s when I realized I had to put him in day care.”

“We have to go outside of our community for that type of excellence,” she said.

Although she could have decided to take JP to an already established school in Statesville, Charlotte or Winston-Salem, Tannehill wanted him to develop relationships with friends nearby. She also wanted other local children to have the opportunity to experience Montessori for themselves.

So, she took matters into her own hands and decided to open Yadkin Path Montessori — a Montessori children’s home, or preschool.

Although Tannehill is stepping out of the college classroom, she said Montessori philosophy is very similar to her own teaching style.

“The teacher is a facilitator, but I’m setting them on the path of learning so they love it no matter where they go,” she said.

Yadkin Path will give her the opportunity to facilitate that love of learning earlier in life, Tannehill said. “I want to start earlier — college is sometimes too late.”

The name pays tribute to the Montessori curriculum goals of teaching “local geography, history and economical and social issues within your community,” Tannehill said. “We named it Yadkin Path because Salisbury is a junction of two trading paths.”

Tannehill will be Yadkin Path Montessori’s owner/director. She’s working on her Montessori credential, and has been certified in first aid, SIDS and CPR. She also went back to school and took the courses necessary to be recognized as an administrator.

Tannehill already has her bachelor’s and master’s degrees in English from Roanoke College, and her educational specialist degree in Educational Leadership from Appalachian State University.

“It’s been a year and a half since I really committed,” she said.

Tannehill has also put together a board of advisors, which includes parents, childcare workers and business owners.

Right now, Tannehill’s focus is on finding a facility to purchase, and she’s made an offer on the former Camp Kiwanis property off Bringle Ferry Road in Salisbury.

Early in December, the Salisbury Planning Board approved changing the zoning at the site from general residential to residential mixed use in order to allow for the school. City Council approved the rezoning in early January.

If she’s able to purchase the property, it will need a lot of work, but Tannehill and her husband, Dean Hamilton, have their fair share of experience in remodeling.

They purchased their 1840s home in Woodleaf several years ago and completely remodeled it — doing the vast majority of the work themselves.

Tannehill even took all the classes necessary for a residential construction diploma.

In true Montessori style, the classroom will have a home-like feel, with child-sized furniture and accessible features such as sinks.

Because the Bringle Ferry property used to be a camp, it already has playground equipment.

To begin with, Yadkin Path Montessori will accept 20 to 30 children between the ages of 2 and a half and 5.

Tannehill said she plans to expand to include infants through 2 year olds, and an additional five to 10 elementary school students for an after-school care with a Montessori affiliation.

Depending on how it goes and what the parents want, Tannehill said the program could eventually grow through the third grade.

At the start, Yadkin Path Montessori will employ one or two lead teachers, one or two teachers and several assistants.

The lead teachers will be required to have an associate’s or bachelor’s degree in early childhood education and a Montessori teaching credential so they understand how to teach and lead a Montessori classroom.

Tannehill envisions the assistants as high school students or retired people who work only part of the day.

She’s also trying to get a star-rated license, a process that will take six months after Yadkin Path Montessori opens.

“The government will be monitoring what I’m doing, as well as the Montessori community,” she said.

If she gets a three-star rating or higher, she can start taking children whose parents get government subsidies for childcare.

She doesn’t have a tuition rate set yet, but Tannehill said that unlike many Montessori schools, she wants to make Yadkin Path’s tuition right at or below the market rate for the county.

Long before she had JP, Tannehill knew she wanted her children to have a Montessori education.

Tannehill was first exposed to it when her niece, Katie Elkin, attended a Montessori preschool in Richmond.

“She was valedictorian of her high school class and she’s at Chapel Hill now,” Tannehill said.

“One of the thing her teachers had her doing was hold a bar of soap and use a vegetable peeler,” she said, adding that not only did those tasks help Elkin develop fine motor skills, but they were fun.

“They don’t have someone saying you’re doing it wrong. They learn so much by doing it on their own,” she said. “They learn to work with something until they figure it out.”

“I saw her classroom and her teacher and her focus,” she said. “It was remarkable.”