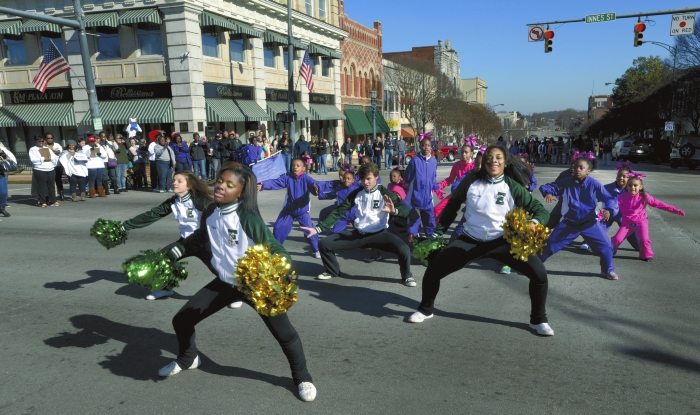 North Rowan Pride Dancers do their routine on the square in the Martin Luther King Parade. Photo by Wayne Hinshaw, for the Salisbury Post

Salisbury on Saturday celebrated America’s most iconic civil rights leader in a parade that started out in downtown Salisbury and, later, became a party at Hall Gym on West Bank Street.

High-stepping up hills or leisurely riding in a car down Main Street, parade participants celebrated the history of civil rights leader Dr. Martin Luther King Jr. in the 29th annual celebration. From 11 a.m. until just after noon, the parade filed through downtown on Main Street. A post-parade celebration was later held at Hall Gym.

The parade began at the intersection of Liberty and Main streets. Some of the first participants in the lengthy line of cars, bikes and walking groups were city officials from Salisbury and neighboring towns.

Just before the start of the parade, Salisbury City Councilman Pete Kennedy commented on the significance of King’s actions in the civil rights movement.

“I’ve been serving on the council for 22 years, and if it wasn’t for that movement, I may not be in this position,” Kennedy said.

“You have to engage the youth,” Mawolo said. “You have to ask who was Martin Luther King and what did he do that was significant at the time. He said that all men are created equal and the equalizer is education.”

Livingstone College’s band was a crowd favorite, drawing cheers as its members marched up the hill to the intersection of Main and Innes streets. It was the only band in the parade, but received the first place award for best band.

Commenting on the day’s events, Salisbury Mayor Paul Woodson said it was important to pay tribute and remember what King’s actions meant for civil rights.

“They went forward not knowing what they were facing in some of these deep southern towns,” Woodson said. “Dr. King and his followers had the tenacity and courage to march and make the lives better for so many minorities.”