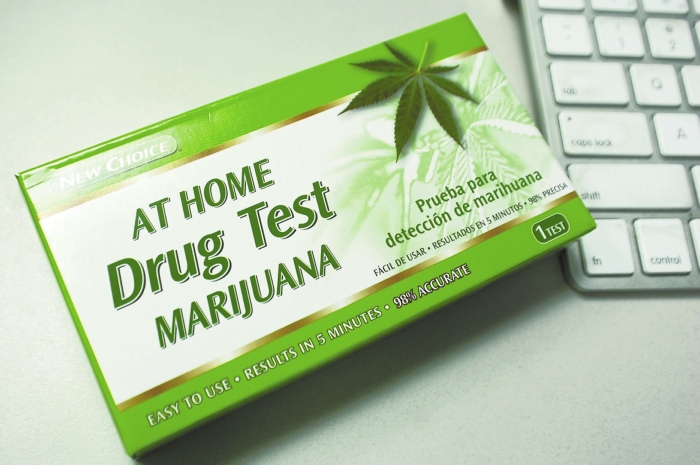 Mark Wineka/Salisbury Post This at-home drug-testing kit for marijuana can be purchased for $1.

SALISBURY — I tend to live my days under a rock, which is not good for someone in the newspaper business, so it came as a surprise the other day when a Facebook friend posted a photograph of the at-home drug-testing kits for marijuana you can buy at the dollar store.

I had to see this for myself, so I walked into a local Dollar Tree, where the sign says “Everything’s $1,” and after going up and down a few aisles, I spied the New Choice kit for marijuana testing. The packages were about eye level, next to “ovulation predictors,” home pregnancy tests, do-it-yourself breath analyzers for alcohol and “warming jelly” for who knows what.

Dozens of companies offer the at-home tests for controlled substances, and drugstores such as Walgreens and CVS have sold various brands for some time. In my prudish way, I guess I was just taken aback by the casualness of it all.

Walk into a dollar store, pick up your marijuana-testing kit and some bug spray and be on your way.

As I was holding an at-home kit in my hand, I sensed a woman behind me, stopping for a moment and making a quick assessment of this man standing before her.

Did he have a teenager at home he suspected of smoking pot? Was he a chronic pot smoker himself who was facing an upcoming job interview and wanted to make sure he could pass the drug screening? Was he looking for a cheap way to administer drug tests for his small business?

When the aisle had cleared, I decided to buy a kit, hoping something inside the box would have more information about the test and who should be taking it. The outside of the box promised the one-test kit was easy to use, would give results in 5 minutes and was 98 percent accurate.

I spent a moment trying to determine what the price of a package was, forgetting that “Everything’s $1.”

Sure enough, the cost was $1.07 with tax. There were two checkout lines open, and I chose the one that didn’t have any children waiting with their parents. The cashier, who was about my age, rang up my purchase matter-of-factly and slipped it into a plastic bag. We avoided eye contact, however.

“Thank you for shopping at Dollar Tree and come again,” she said.

It’s funny how I had felt guilty looking at the product in the store, guilty for purchasing it and guilty as I walked into the parking lot. It seemed as though as I was admitting to smoking marijuana, which is still illegal in North Carolina, or I suspected someone of doing it, again illegally. But there I was casually buying a kit at The Dollar Tree for $1.07.

At home that night, my wife rolled her eyes when I pulled the box out of my coat pocket and laid it on the kitchen counter. I told her it was research for a column, but she said I would be better off writing about how Merriam-Webster has printed its last dictionary and gone completely digital.

I shrugged, because that was depressing, and went to the living room to watch television. Later, when I was opening the kit, I discovered there was no paper, just a plastic pouch and a limited amount of information on the inside of the box.

There were three steps to the dip-strip test. Collect your urine. Remove the test strip from its pouch and immerse it into the urine up to a “max” line. Wait 5 minutes and read the results.

“Do we have a plastic, disposable cup?” I asked my wife.

Again, she reacted with indignation and the rolling of eyes. She realized I meant to take the test.

“We have a red Solo Cup,” she answered, but she wasn’t hanging around for me to submit my own urinalysis. She tramped off to bed.

If you must know, the test result came back negative for THC, the active ingredient in marijuana. I saw the two pink lines I was supposed to see for the negative result, so I guess the take-away lessons from this strange bit of research are simple:

You can find a lot of things at the dollar store, and red Solo Cups come in handy.