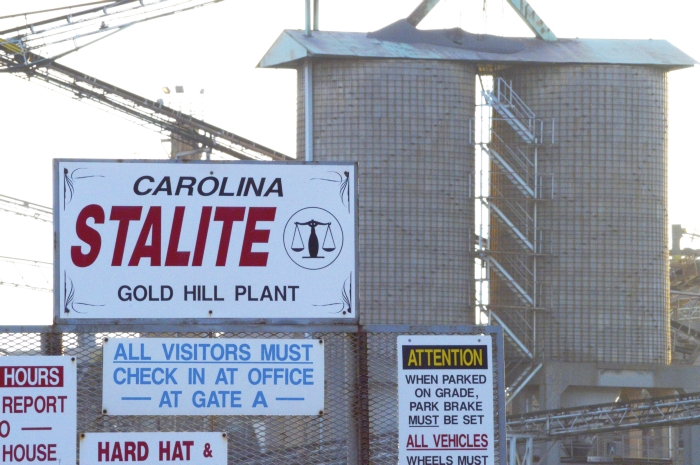 Josh Bergeron / Salisbury Post - Carolina Stalite was one of three different entities cited in December by the North Carolina Department of Environmental quality for an unlicensed dump site near Gold Hill.

Three separate divisions of DENR cited  Carolina Stalite, Hammill Construction Co. and farmer Phil Cline for several environmental violations, including: operating a non-permitted waste site and allowing the stored waste material to enter a nearby stream. The site is in Cabarrus County and near Gold Hill.

The dump site, approximately 4 acres in size, was allegedly used to store emission control dust, described by a Carolina Staylite employee as a lime equivalent. Lime is a material used by farmers to help balance the pH of soil.

Certified letters detailing violations were sent to both companies and Cline, who is an applicant for biosolid material from Charlotte-Mecklenburg.

“You can apply lime on the ground,” Cline said. “I told them to go ahead and it saved them money. Lime is something you use to put on farmland. This is the same stuff.”

Plant Engineer of Carolina Stalite’s Gold Hill facility Tim Agner, likewise, said the leftover material from his facility is beneficial to use on soil.

“It’s been tested and approved by North Carolina Department of Agriculture as an agricultural lime equivalent to enhance soils,” Agner said. “Unfortunately, we’ve recently been made aware of an un-permitted use and are working to rectify the matter.”

Approximately 750 feet of an unnamed tributary leading into Little Buffalo Creek was filled with the emission control dust and the tributary’s pH level was measured at a non-standard amount, according to another letter, dated Dec. 9, from DENR’s Division of Water. In the letter, Regional Supervisor for Water Quality Operations Michael Parker writes that 22 feet of emission control dust built up on the bottom of the stream. In the same letter, Parker writes that the built-up waste “resulted in the loss of use of the channel for aquatic wildlife.”

In a section labeled “required response,” Parker says “the fill shall be removed from the stream channel and the stream restored to its natural dimension, pattern and profile,” Parker also tells both companies and Cline to follow an approved erosion plan, prevent the waste from moving downstream during its removal and provide locations of other areas being used as disposal sites.

Parker’s requirements are just a few listed in DENR’s letters. Disposing of waste at an approved facility, conducting a waste analysis, installing erosion and sediment control devices and ceasing all hauling activities to the site are items listed in other letters as “required response.”

The dump site was reported to DENR by Gold Hill residents, many of whom expressed anger during a November 2014 public hearing about Cline’s pending permit to receive biosolid material, or sludge, from Charlotte Mecklenburg Utilities.

Dr. Lance Riley, who has a Ph.D. in aquatic science from the University of Florida, said he helped facilitate the complaint to DENR and is concerned about how the material on Cline’s property might affect the nearby wildlife. Riley has been an outspoken opponent of Charlotte-Mecklenburg’s proposal to put sludge on farmland near Gold Hill.

DENR representatives met with Cline this week to discuss the future of the non-permitted dump site.

It’s unclear if restoration activities, such as removing the emission control dust from the stream, have started. A DENR representative did not respond to requests for comment about this week’s meeting by press time on Saturday.