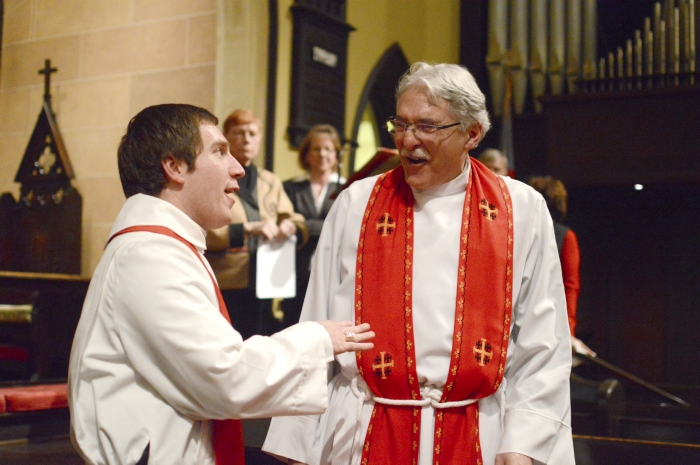 “The good ole days were good for some, but not good for all,” León said. “There can’t be a litmus test for people in the church.”

Church congregations have a tendency to be inward looking and have a reluctance to assert their responsibility, he said, adding that the Bible should be a sign post, not a hitching post.

As part of León’s sermon, he spoke extensively about inclusivity, saying St. Luke’s and the institution of the church have to respect the dignity of every human being. He said the church institution cannot be defined by a singular axis.

León also jokingly peppered in a few comments about Black, who served as assistant rector at León’s church in Lafayette Square.

“There’s only one perfect son and he’s not your rector,” León joked.

Jokes aside, León complimented Black on his personality and character, describing Black as “dedicated, committed, smart, compassionate and having a good sense of humor.”

León also told the packed church about a more meaningful attachment to Salisbury. He said he was ordained in Salisbury in 1975. León’s attachment to the Piedmont also includes serving as assistant rector at St. Peter’s Church in Charlotte.

In his closing comments, León encouraged the church to give Black the time and space to lead the St. Luke’s congregation.

Black is a south Florida native and joined St. Luke’s on Sept. 8.

He is the 28th rector in the parish’s 261-year history and succeeds the Rev. Whayne Hougland, who was elected bishop of the Diocese of Western Michigan last May.

Black is married to Tyler, a professional speech therapist, and has a 2-year-old daughter named Ellie.