The education of Chris Smith 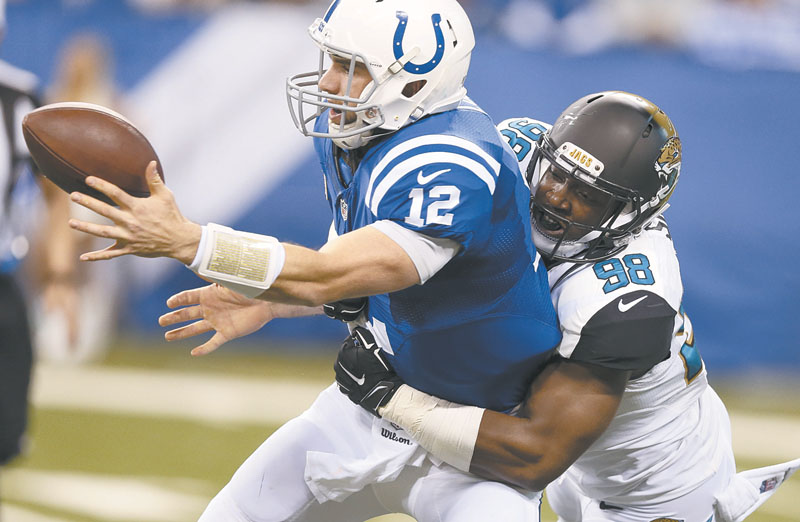 The Associated Press Jacksonville defensive end Chris Smith (98) sacks Indianapolis quarterback Andrew Luck (12) on Nov. 23, 2014, and forces a fumble on the same play. Smith, a rookie who graduated from West Rowan and went to Arkansas, had three sacks in seven games in 2014.

The first year of what Chris Smith hopes will be a long, illustrious career in professional football has a common thread. Education.

Smith learned about the business side of the game almost right off the bat. He was drafted by the Jaguars in the fifth round of the 2014 NFL Draft. Coming out of his first training camp, he made the 53-man active roster.

In a Sept. 7 loss to Philadelphia, safety Jonathan Cyprien suffered a concussion. The Jaguars signed Craig Loston from the practice squad. Smith was placed on the waiver wire to make room on the active roster.

“One thing about the NFL is it’s a business. So they waived me,” said Smith, who was part of two state title teams at West Rowan before graduating in 2010. “They brought me back on the practice squad.”

He found himself back on the 53-man roster when Andre Branch went down with a groin injury in late October, and he made the most of it his second go-round.

Throughout the season, Smith picked up lessons from defensive linemen Chris Clemons, Branch, Roy Miller and Sen’Derrick Marks. He learned the importance of film study.

In college, Smith was able to bull rush offensive tackles or use his speed to get around them to apply pressure to the quarterback. That wasn’t going to fly in the NFL.

“Now that I’m going against veterans, I can’t speed rush all the time. It’s really like a chess game,” he said. “The thing about it is becoming a student of the game. I watch more film than I ever did in college or high school.”

Sometimes it was game film of an opponent. Sometimes it was film from Jaguars practices. Between meetings with his position group and the entire defense and watching film on his time, Smith estimated he spent at least 10 hours studying film every week.

“It’s funny. Sen’Derrick Marks said, ‘By the end of the season, you will see every team play,'” Smith said. “We watch more film than we practice.”

It paid off for Smith on Nov. 2 when the Jaguars traveled to Cincinnati.

On the Bengals opening drive, Smith and Ryan Davis shared a sack of Cincinnati quarterback Andy Dalton on the Bengals’  opening drive. It was Smith’s second game since finding his way back to the 53-man roster. It was his first tackle of the regular season.

Three weeks later he made a play on one of four quarterbacks still in the running for the Lombardi Trophy.

Jacksonville was in Indianapolis for an AFC South matchup against the Colts. The Jaguars trailed 3-0, and the Colts had the ball on third-and-8 at their own 31. Smith got his arms around Luck for the sack and forced a fumble in the process. Marks recovered the ball. The play set up a game-tying field goal.

Smith called it his biggest accomplishment of the season.

“Going into my rookie year, that was one of the QBs I wanted to get,” Smith said. “There are three I want to get. I want to get Peyton Manning, if he doesn’t retire, and I want to get Tom Brady.”

Smith was in the spotlight again in the Jaguars’ next to last game of the year. With a national audience in the last Thursday night game of the season, Smith took down Tennessee quarterback Charlie Whitehurst for his final sack of the year.

Smith is learning the importance of the offseason.

He returned home the day after Jacksonville’s season-ending loss to Houston. He’ll be home for all of January and most of February to visit family. He’s going to spend time with his daughter and maybe travel a little bit. He and his girlfriend might go to Atlanta to go shopping. He said he plans to fly to Los Angeles to visit a few teammates.

“It’s been good seeing everybody and just coming back to relax,” Smith said.

Though it’s not like Smith is going to stop working until he goes back to Jacksonville in April.

“We got three, four months off to do what we want, but I got to be in shape,” Smith said.

Training for the upcoming season started soon after got back in town. Smith said he’s been exercising with West Rowan volleyball coach Jan Dowling. They work on his lower-body strength so he can be explosive. He also wants to improve his technique so he can be more of a three-down lineman instead of a third-down pass rusher.

To get better at the professional level, Smith is taking it back to West Rowan where he dominated opponents and was a part of two N.C. High School Athletic Association football championships.

“This is the beginning,” Smith said. “I’m just going to keep working and trying to become the best defensive end in the NFL.”

Duke zones in on defense in win at Louisville