Gas prices dip below $2 in Rowan 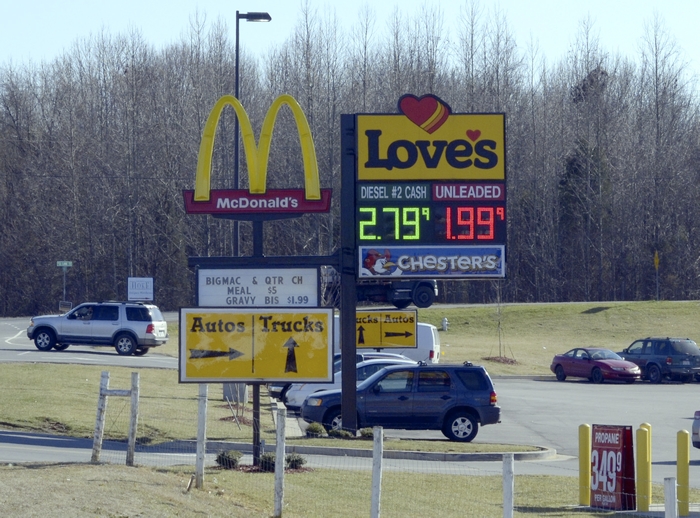 SALISBURY — Who remembers the last time gas was below $2 a gallon in Rowan County?

Starting Thursday, some stations’ prices for regular unleaded dropped below the $2 mark, if only by a tiny bit.

Early Friday afternoon, a Post reporter observed prices as low as $1.97 and nine-tenths for regular unleaded at the Wilco Hess truck stop off Peeler Road at Interstate 85.

Across the highway, the Love’s Travel Stop advertised regular gas for $1.99 and nine-tenths.

The falling fuel prices have been a welcome change for motorists, who are enjoying the lowest cost at the pump in nearly a decade.

“It helps a lot,” said Allan McKenzie, who works at Universal Forest Products in Salisbury. He was topping off his tank at Love’s Travel Stop on Friday.

McKenzie said his job requires him to drive as much as 1,000 miles in a given week.

Although the company pays for that travel, lower prices have helped his family, also, McKenzie said.

According to AAA, the national average for regular gas was $2.082 per gallon on Friday – down from $3.302 this time last year.

April 2009 was the last time regular unleaded sold for below $2 per gallon, on average, in the Charlotte region, according to Gasbuddy.com’s 84-month chart of average retail prices.

A drive around Rowan County on Friday showed prices have yet to fall everywhere.

As of Friday morning, all three gas stations in Rockwell were selling regular unleaded for $2.149.

Both gas stations on U.S. 52 in Granite Quarry were priced at $2.129 for regular midmorning Friday, a Post reporter observed.

And most gas stations along East Innes Street and Jake Alexander Boulevard were selling regular gas for $2.099.

The lowest prices were reported south of Salisbury and in Kannapolis.

Observations reported on Gasbuddy.com indicated gas was selling for $1.979 at the Wilco Hess at South Main Street and Airport Road, and the nearby Hot Spot at 5715 S. Main St.

Prices are trending lower in Kannapolis, where a Post reporter saw regular gas selling for $1.979 at several stations on Lane Street and North Cannon Boulevard as of Thursday night.

The lowest gas price reported in the area is $1.959 at the Kangaroo station at 3065 Dale Earnhardt Blvd., according to Gasbuddy.com.

And drivers who need to go farther south can get gas for even less. Gasbuddy.com users reported regular unleaded was selling for as little as $1.68 per gallon in Rock Hill, S.C., on Friday.

Although falling gas prices have added to consumer spending, some media reports have speculated that lower prices might lead to fewer jobs in the oil sector, or cuts in growth for green energy sources.

For Gail Perez, of Charlotte, there’s still a ways to go before her price per gallon drops below $2.

Perez, who stopped in Salisbury to fuel up Friday, drives a 2014 GMC Denali SUV, which requires a higher grade of gas.

Even with her fuel at $2.29 a gallon, Perez said, “the savings adds up quickly.”

Perez said her husband also commutes two hours to work each weekday. “We use gas like it’s going out of style,” she said.

And even though she’s still waiting to see if her price per gallon will go below $2, Perez said she’s glad for the break her family is getting at the pump now.