Duke zones in on defense in win at Louisville 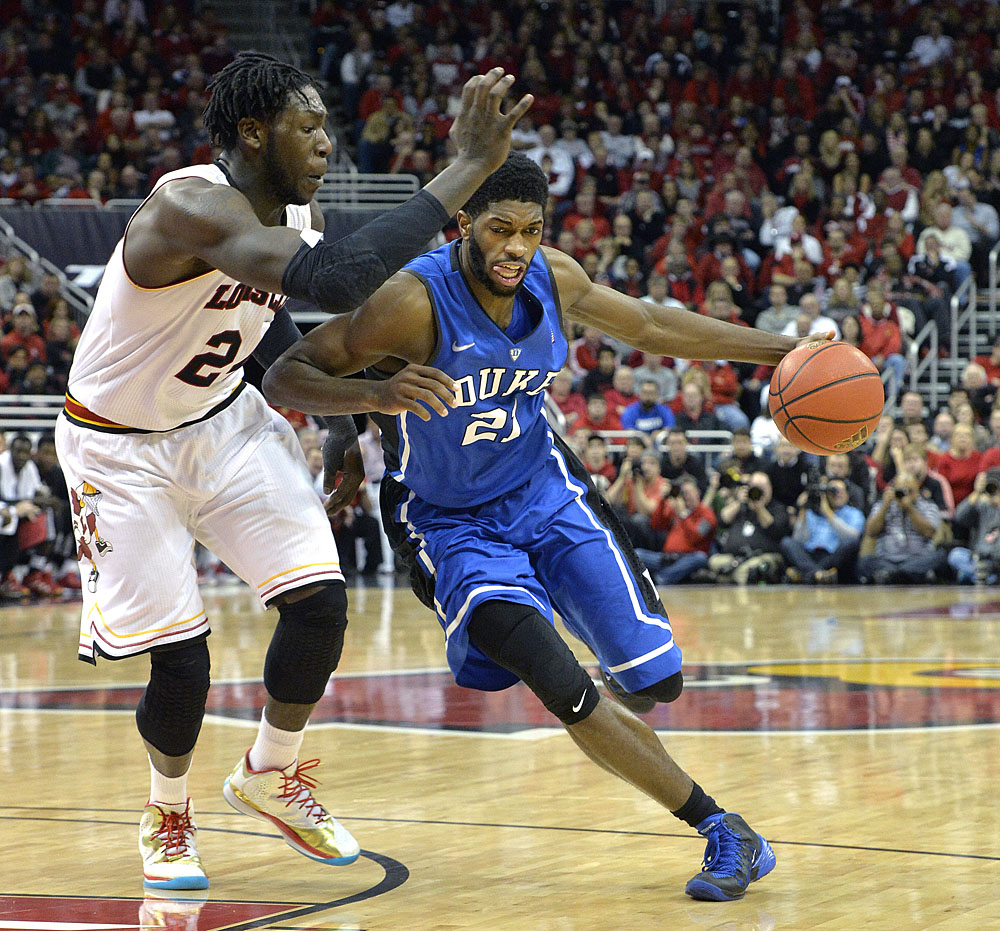 The Associated Press Duke's Amile Jefferson, right, attempts to drive past the defense of Louisville's Montrezl Harrell during the second half Saturday in Louisville, Ky. Duke won 63-52.

LOUISVILLE, Ky. (AP) — Nice as it was to finally halt the losing streak, Duke coach Mike Krzyzewski cautioned against reading too much into Saturday’s 63-52 win over No. 6 Louisville.

That’s asking a lot considering how effective the Blue Devils’ zone defense was in denying the Cardinals inside.

Duke’s defense made it easy for Jahlil Okafor to take over on the other end as he scored 14 of his 18 points in the second half. Amile Jefferson added 19 as Duke handed Louisville its first double-digit loss in three years.

Staggered by Tuesday’s 16-point loss to Miami that ended their 41-game home winning streak, the Blue Devils (15-2, 3-2 Atlantic Coast Conference) rebounded to throttle the Cardinals on their home floor and end a two-game slide. The 6-foot-11 freshman Okafor and 6-9 Jefferson played a big role in outscoring Louisville 32-24 in the paint while denying the inside defensively.

Louisville (15-3, 3-2) shot just 18 of 61 from the field (30 percent) and failed again led to beat one of the ACC’s traditional powerhouses. The Cardinals lost at North Carolina last Saturday.

“I thought our offense was affecting our defense and we needed to change our point of pick up — whether it be man or zone — and put it at the top of the key,” Krzyzewski said. “Try not to let people get points in the paint against us. Our guys did a good job of that.”

Okafor, Jefferson and Justise Winslow each grabbed seven rebounds as the Blue Devils finally put Krzyzewski within two wins of 1,000.

“Coaches put in some new stuff coming into this game and we followed it to a T,” Jefferson said. “We ran a new offense, we had new plays. We did a lot of things differently and it really helped us out today.”

Terry Rozier’s 17 points led Louisville, which trailed by 21 in the second half before getting within 10 points, at 58-48 with 1:29 remaining. The Blue Devils were firmly in control at that point and won the matchup between Hall of Fame coaches Krzyzewski and Rick Pitino.

Both teams shot poorly at the start, but Duke eventually took advantage of Louisville’s misfires to close the half on a 15-6 run for a 30-20 halftime lead. The Blue Devils’ zone defense succeeded in forcing the Cardinals into burning a lot of clock before taking long-range shots that missed despite good looks.

“This was the most open we’ve been and we just could not knock down the shot,” Pitino said after the Cardinals’ second-worst shooting performance this season. “I have said that we are a little offensively challenged from the perimeter, so we’ve got to be meticulous with our paint touches because we’re not a great shooting team.”

Okafor had just four points at the break, but the ACC’s leading scorer soon asserted himself by scoring eight of Duke’s first 16 points to turn the game into a rout and quiet a sellout crowd hoping the Cardinals would earn a signature ACC win.

TURN BACK THE CLOCK

Louisville played in 1980s-era throwback uniforms featuring a dunking Cardinal logo on shorts much longer than those worn back in the day. Members of the 1980 NCAA title squad were honored at halftime including Hall of Fame coach Denny Crum and star Darrell Griffith.

LID ON THE BASKET

Louisville was ice cold in the first half, shooting 7 of 31 including 11 straight misses over a six-minute stretch before making its final three. The last one involved some drama, as Montrezl Harrell’s jumper bounced three times on the rim before dropping through at the horn to trail 30-20. He finished with 10 points.

Duke: The Blue Devils were outrebounded 38-32 but owned the defensive boards 27-20. … Duke guard Tyus Jones left the game briefly in the first half for treatment of an ankle injury but returned to score 10 points.

Louisville: Rozier made 3 of 7 from 3-point range but the rest of the Cardinals combined to shoot 1-of-17 from behind the arc. … Louisville’s last double-digit loss was 74-63 at Marquette on Jan. 16, 2012 according to STATS.