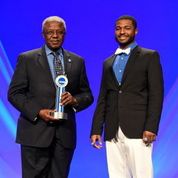 During a well-choreographed, three-hour ceremony that featured former Major League pitcher Mike Mussina, a millionaire whose family once lived in a boxcar, and the Bowie State University Marching Band, Thomas stood on a stage he probably never imagined to accept his award and discuss his career at Livingstone.

“First of all I want to thank God,” Thomas said. “That’s the first thing. Attending Livingstone College gave me the opportunity to play basketball and get my education. Coming from a small HBCU and receiving an honor like this just shows all things are possible.”

Thomas was escorted on stage by Livingstone College President Dr. Jimmy R. Jenkins, Sr. They stood together momentarily, posing with Thomas’ award, before Jenkins exited and Thomas chatted with Master of Ceremonies Jack Ford, a legal analyst for CBS News who played football at Yale University and is a former prosecutor and host of ESPN’s “The Sports Reporters II.”

When he returned to his seat inside a ballroom at The Gaylord National Resort & Convention Center, where a capacity crowd enjoyed the awards dinner, Thomas was given a high-five by his brother, Lance Wilson, and a kiss from his mother, Leslie Thomas.

The NCAA Today’s Top 10 Award recognizes student-athletes, who completed their athletic eligibility during the 2013-14 academic year, for their success on the field, in the classroom and in the community. Previously, the NCAA recognized five students annually before increasing the number to eight and eventually 10.

Friday’s ceremony also featured Mussina and five other Silver Anniversary Award winners and came at a good time for Thomas, who graduated in May 2014 with a 3.7 GPA. He learned two months later he suffers from hypertrophic cardiomyopathy and can no longer play basketball.

During a video that played Friday night, he acknowledged giving up basketball has been extremely difficult but said, “I guess if this had to happen to me this was the best time … after my college career ended.”

During his senior season at Livingstone, Thomas averaged 21.4 points, 4.5 assists and 2.5 steals per game. He was named 2013-14 CIAA Player of the Year and led the Blue Bears to their first CIAA Championship – both firsts in school history. He also snagged a spot on the All-CIAA Tournament Team and Tournament MVP honors.

Despite his obvious pain over not being able to play basketball anymore – he’d hoped for a shot at playing overseas – Thomas is grateful for playing three seasons under Livingstone head coach James Stinson, Jr.

And though he’s appreciative of the many awards he’s received, particularly The NCAA Today’s Top 10 Award, he said he’s more concerned about making a difference in someone’s life.

“Every kid needs somebody to look up to,” Thomas said in his video. “If one kid can look up to me and say, ‘I want to be like him,’ that’d be great. That’d be better than winning all of the awards, honestly.”

Livingstone College athletic director Andre Springs wasn’t surprised to hear those words from Thomas, who he said is a perfect example of what can happen “when you give a kid a scholarship and he takes full advantage of it academically as well as athletically.”

“This is a great night for Livingstone and an even greater night for Mark,” Jenkins said. “It really punctuates a stellar career, both academically and athletically. Mark is an exceptional human being. He’s very mannerly, very humble, very talented and very optimistic. I believe we’ve just begun to see the plateaus that he will reach in his life.”

During a dessert reception after the dinner, Thomas struggled to adequately express what the night meant to him.

“It was beyond my expectations,” he said. “I’m almost speechless. To be one of the Top 10 athletes in the country is pretty special.”

Lacey, Turner come through in the clutch