Boys basketball: North Rowan pulls away in the end 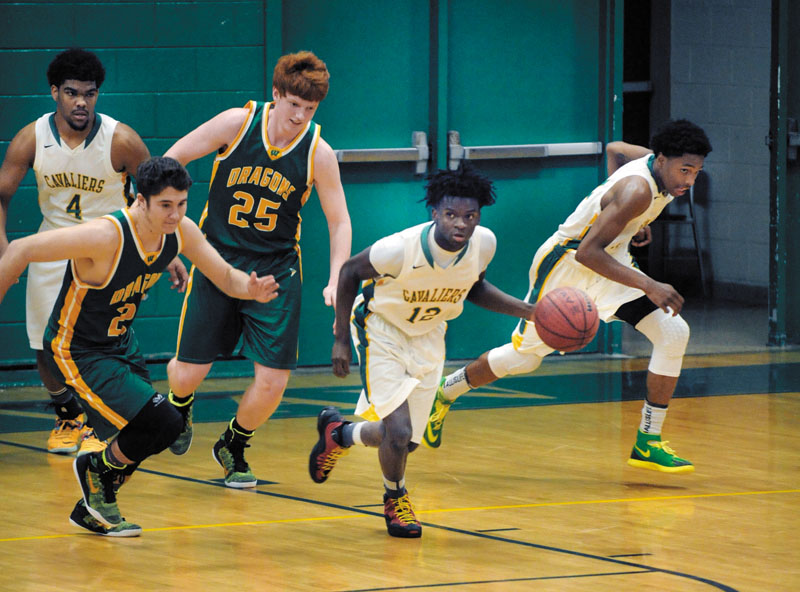 SPENCER — It was the worst of times and finally the best of times in the fourth quarter for North Rowan on Friday.

After a frustrating string of missed layups to open the final period against visiting West Davidson, the Cavaliers exploded for a 13-1 run when it counted to secure a 54-40 win. North Rowan enjoyed a 13-point lead late in the third period but went scoreless for the first four and a half minutes of the final quarter as the Green Dragons cut the margin to five points.

Suddenly, North Rowan flipped the switch to go on a scoring tear over the next two minutes, expanding their lead to 52-34. Big forward Josh Handy and Alexis Archie provided the inside power while guards Jalen Sanders, Paris Hillie and Joseph Scott provided the speed in transition to put away the Dragons.

Cavaliers coach Andrew Mitchell enjoyed the scoring burst but credited his defense with turning the tide.

“We just stayed focused and starting playing position defense rather than gambling on everything,” he said.

With the win North Rowan (9-4, 2-0) is now the only unbeaten early in the Central Carolina Conference race, a game ahead of Lexington, Salisbury and West Davidson (9-5, 1-1).

North Rowan maintained a working margin throughout the first half, thanks in large part to Joseph Scott, the leading scorer with 20. The lead was 39-26 with a minute left in the first half, but the Green Dragons closed it to 39-31 at the break as they battled inside for every rebound and loose ball behind Tyler Grooms and Scott Hughes.

The Cavaliers seemed to be in serious jeopardy to open the final period as they misfired on a string of 13 layups and put-backs while West Davidson was trimming the lead to 39-34. The 6-foot-5 Handy, who was involved in a number of the misses down the baseline and above the rim, could only shake his head afterwards.

“It was just crazy with all those missed layups,” Handy said. “Coach Mitchell said I was being too pretty because I was trying to finger roll it. I guess I should have just dunked it.”

Mitchell said he prefers a missed dunk to “a cute missed layup.”

But Handy more than made up for the missed shots by scoring 13 points, grabbing 10 rebounds and blocking two key shots in the fourth quarter when the Dragons were trying to come back. Point guard Jalen Sanders played a strong floor game, scoring nine and dishing out numerous assists.

Point guard Carson Beane led the Dragons with 12 on long-range shooting while Groome and Hughes scored 10 each. Hughes also had 10 rebounds.

“This is the right time to be winning games,” Mitchell said. “West Davidson is very talented and well prepared, but we are starting to do the things we need to do now.”