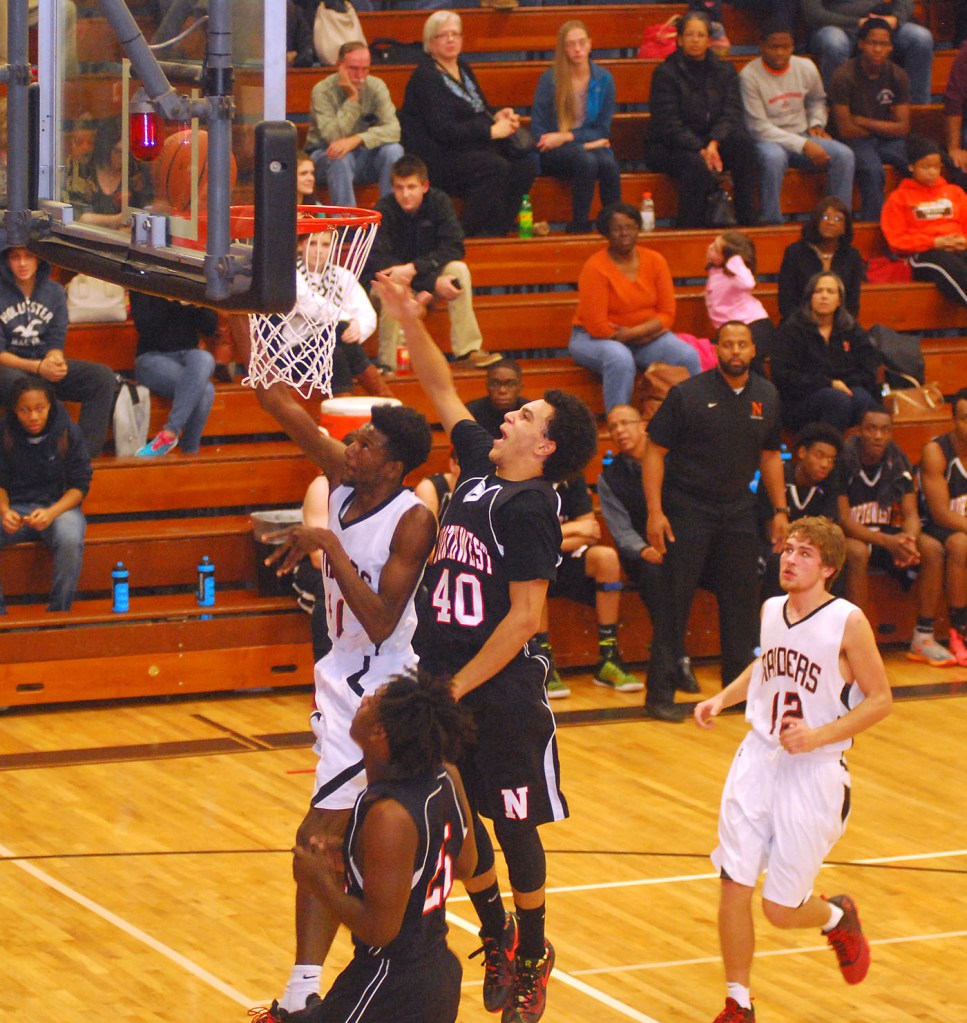 Adam Houston/The Salisbury Post South Rowan's Lavon Hill (11) goes up for a layup Friday as he is defended by Northwest Cabarrus' Nathan Clark (20) in the first half.

LANDIS — South Rowan pulled a few dents out of its car wreck of a season Friday against Northwest Cabarrus. The Raiders snapped a four-game losing streak and played sneaker-to-sneaker defense in the first half of their 64-59 South Piedmont Conference victory.

“We needed a lift so we can get that feeling back,” coach Bryan Withers said. “We’ve kind of been up and down, but we’ve got to learn to bounce back. We’ve got to be resilient — always bouncing back.”

No one exemplified that better than South Rowan’s Lavon Hill. The 6-foot-4 senior returned to his early-season form by scoring a game-high 30 points, reeling in 11 rebounds and converting nine of 11 free throws. Hill totaled only 25 points in South Rowan’s previous four games.

“Early in the season I was doing a lot of this,” said Hill. “When the Christmas tournament came I started messing up. Tonight it was just a matter of pushing the ball down court and getting a lot of fastbreak points.”

Hill was at his in-the-paint best in the second period, when he scored 11 points. His driving, over-and-under layup gave the Raiders (4-11, 3-6) a 14-10 lead and his 3-pointer from the right side put South Rowan up 17-12 midway through the quarter.

“We played defense and made our shots,” Qwan Rhyne said. “(Hill) was our leader. We pushed the ball and played the game at our speed.”

They tried to, anyway. The game quickly turned into a foul-fest as each squad was whistled for 25 infractions. That benefited the last-place Trojans (1-11, 0-8), who ran their offense more efficiently and sank eight 3-pointers in the second half.

“They play everyone tough,” said Withers. “That’s how I want us to be. They haven’t won and they got down, but they never quit playing ball. That’s what we have to be.”

That’s what South Rowan was when Northwest Cabarrus inched closer in the second half, trimming a 13-point third-quarter deficit to 57-49 when Nathan Clark beamed in a 3-pointer with three minutes to play.

The outcome was determined at the foul line. South Rowan hit 9-of-10 during a two-and-a-half minute stretch late in the final period. Northwest Cabarrus, meanwhile, went 9-for-18 from the line in the fourth quarter.

“We played with effort,” Rhyne said after contributing 11 points. “And played as a team.”

South Rowan’s final basket came when Hill muscled inside for a creative layup that made it 57-46 with 3:26 remaining. Northwest Cabarrus used a couple of last-minute home run balls from Brian Leach to close the scoring. When they rolled the final credits, no one’s name looked bigger than Hill’s.

“Lavon’s been fighting a slump,” Withers said. “He had some great games early in the year and this just was another one. This is the Lavon we want all the time.”