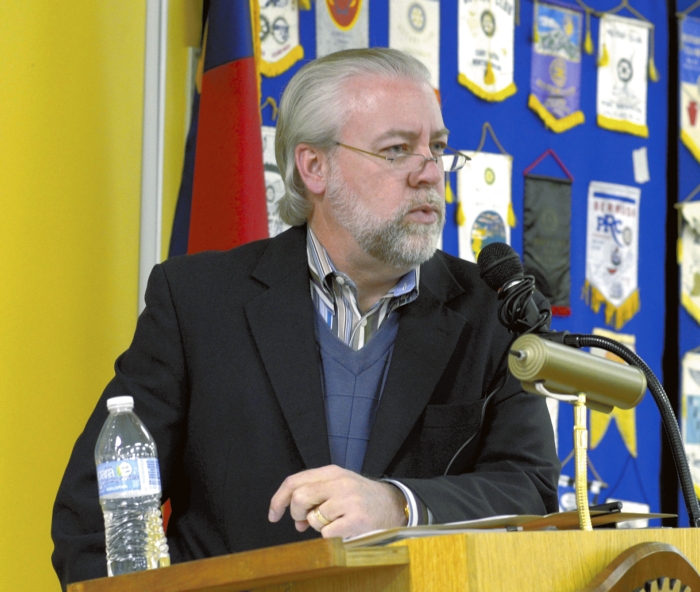 KANNAPOLIS – In 2015, members and leaders of Downtown Kannapolis, Inc. say they hope to be very busy.

Eric Dearmon, who chairs the DKI board, kicked off the first meeting of the new year Thursday by telling members and guests to be ready for an exciting year, as businesspeople gathered to network and talk about coming activities.

DKI is comprised of business owners and representatives, community leaders and concerned citizens focused on bringing renewed attention and business to downtown.

It’s a difficult fight that many members have been waging since before the recent recession – even before former textile manufacturer Pillowtex closed in 2003, taking thousands of jobs out of downtown.

Some DKI member businesses have been open for decades, as representatives said during introductions at the start of Thursday’s meeting.

This year, DKI’s goals include doubling its membership from about 50 to 100, and ramping up efforts to market downtown Kannapolis as a place to shop, dine and relax.

It’s a task that Dearmon, and others, say is going to take a lot of work, and a lot of support from the community, but the tone of Thursday’s meeting was confident.

“I’ve got to tell you, 2015 is going to be an exciting year for downtown Kannapolis,” Dearmon said.

The task of creating awareness and promoting downtown businesses led DKI – which started as a standalone group of businesspeople – to form a partnership with the city of Kannapolis, which provides funding and support for some events.

Irene Sacks, director of business and community affairs for the city of Kannapolis, is the city’s DKI liaison. She said DKI plays a vital role in helping draw attention to businesses in the city.

“We need organizations like DKI who are willing to recruit volunteers and put on events throughout the year, to help bring people downtown and bring more energy to Kannapolis,” Sacks said.

In the year ahead, Sacks said the city would consider ways to strengthen its partnership through involvement in DKI-sponsored events and joint marketing efforts.

In addition to Sacks, representatives from the Cabarrus Regional Chamber of Commerce and the Cabarrus County Convention & Visitors Bureau serve as ex officio members of the DKI board.

And member businesses try to support one another when possible, as Dr. Eric Atkinson, of Atkinson Family Eye Care, said during his presentation.

Atkinson Family Eye Care was the first local firm to be featured as part of an initiative to spotlight a DKI member business each month at meetings and online.

Other members have worked to promote the group’s website and Facebook page, which also features information about downtown businesses.

Dearmon said one recent post on Village Grill – now back under management of longtime owner Mike Mahaley – had gotten over 3,000 views on Facebook.

David Steele, who chairs DKI’s design committee, said his members will be talking to city officials about ways to improve downtown streetscapes and add signage to welcome visitors and residents to downtown.

Looking ahead to 2015, Steele said the city is “at a pivotal moment” in its history.

In July 2014, the city announced it was considering the possibility of making an offer to purchase some of N.C. Research Campus developer David Murdock’s downtown holdings.

Murdock acquired acreage in downtown Kannapolis as part of his original purchase of Cannon Mills Co. in 1982.

After the bankruptcy of Pillowtex in 2003, Murdock purchased the former mill and demolished it, to create the downtown biotechnology research hub.

Many downtown storefronts have been vacant throughout the recession.

Even so, other businesses are thriving downtown, including restaurants and retail outlets.

Nearby, new construction is underway at the NCRC and at the site of the future Kannapolis city hall and police headquarters.

Steele said that a partnership with the city will allow DKI to have “a voice in the process” as economic recovery continues downtown.

Brenda Drye of the Cabarrus Events Association told DKI members she looked forward to working with them to host more events in the city this year.

“I can promise you, you’re going to have a great time,” Drye said.

DKI presented concerts at the Gem Theater with country artist Rhonda Vincent in 2012 and 2014, and is currently working with promoters to see if another major-label act may perform there in 2015.

Other events are being discussed, including a possible revival of the downtown fall festival, Drye said.

David Miller, membership chair, said all these plans will require active membership, as well as promoting DKI and downtown businesses in the community.

He urged those present to continue telling others about the good things happening in downtown Kannapolis, and sharing the success of the businesses located there.

“That type of storytelling is contagious and compelling,” Miller said.

Wayne Hinshaw column: A time to reflect about the…