Whiskey bottles uncovered in Spencer attic a ‘find of the decade’ 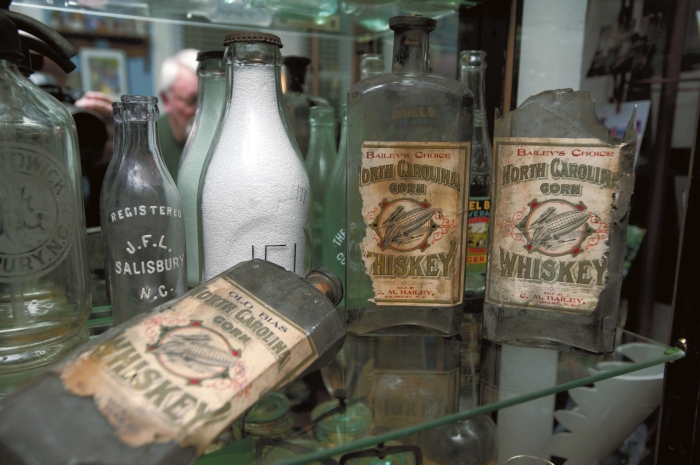 JON C. LAKEY / SALISBURY POST John Patterson recently aquired three whiskey bottles that were from a Salisbury whiskey producer in the early 1900's. on 1/14/15 at in Spencer, NC, .

SPENCER — Avid bottle collector John Patterson Jr. still can’t believe how close he was to these rare whiskey bottles without ever knowing it.

Back in December,  just houses away from Patterson’s Spencer residence, a neighbor was tearing down an attic chimney when three C.M. Bailey whiskey bottles — probably stashed away more than 100 years ago — fell onto the floor during the demolition.

“I cannot believe they were not just totally destroyed,” Patterson says. “I know how hard it is to find whiskey bottles of any kind. To find them like this …”

Patterson’s voice trails off in amazement.

Patterson knew of the C.M. Bailey distillery, which operated in Salisbury only briefly, from 1905-1909. In 1982, Patterson had bought an embossed C.M. Bailey half-pint flask from Carl Spencer, and Patterson has seen only one other flask like it since then.

But what made these C.M. Bailey whiskey bottles from the house in Spencer so unique was they still had their paper labels — the first time Patterson has ever seen them. Somehow, the bottles’ being stashed next to the attic chimney all these years had managed to preserve a good portion of the labels, if not all of the bottles.

“Anytime I find a Salisbury whiskey, it’s a major find for me,” Patterson says, adding it happens maybe once a year. He also has gone two to three years without adding any Salisbury whiskey bottles to his collection.

“Even though they’re damaged a bit,” Patterson adds, “I still think they are a rare piece of Salisbury history.”

Patterson calls it a “new find of the decade.” He purchased the bottles from his Spencer neighbor.

With help of a fellow bottle collector in Raleigh who sent Patterson advertisements and articles related to C.M. Bailey, Patterson says Bailey had a saloon and/or distillery at 110 E. Innes St., Salisbury, starting about 1905. Prior to then, Bailey ran a bar and sold wines, liquors, cigars and tobacco at an establishment on Water Street in Washington, N.C.

A 1905 published notice in a Salisbury newspaper stated, “Since the repeal of the anti-jug law by the legislature, I am now prepared to ship all kinds of pure liquors to Davidson County. Address all orders to C.M. Bailey, 110 East Innes St., Salisbury, N.C.”

A company charter, published in 1907, says the Bailey Whiskey Co. of Salisbury was formed to “manufacture whiskey and deal in all kinds of spirituous liquors.” Capital stock of $3,000 was authorized, and the principals of the company were identified as Bailey, J.R. Bias (no doubt where the “Old Bias” brand came from) and S.B. Wallace.

A Meroney Theatre program from 1907 includes an advertisement for C.M. Bailey and his “fine whiskies, beers, soft drinks and cigars.” It also touts Bailey’s establishment as the “nearest saloon to the theatre.”

Patterson says Salisbury in the early 1900s had a reputation as a “wild and wicked town” because of its numerous saloons and distilleries.

A newspaper clipping from 1908 reported that Bailey fired a gun at N.S. Freeman, a Coca-Cola dealer in Salisbury. Bailey was identified in the brief story as a saloon keeper, who claimed Freeman had assaulted him.

“The gun was knocked out of his (Bailey’s) hand, and the men were soon separated,” the newspaper said. “The shooting followed a quarrel.”

Prohibition came to North Carolina Jan. 1, 1909, but Bailey apparently kept selling his whiskey for a time after it took effect.

A 1909 newspaper article shows that a Judge Miller fined both Bailey and Homer Miller $500 and costs for  selling whiskey.

“Judge Miller has shown that he intends to put a stop to the retailing so far as his court is able,” the newspaper said.

Why would the Bailey whiskey bottles discovered in Spencer have been stashed away in an attic?

Patterson isn’t surprised. Spencer used to have boarding houses for railroad workers, who often would find hiding places in the attics for their whiskey bottles. “They would go up and get a drink whenever they could and leave their bottles there,” Patterson says.

Once Salisbury was dry and he couldn’t sell whiskey any longer, Bailey apparently moved to Petersburg, Va. Patterson has a 1910 newspaper advertisement for the C.M. Bailey Liquor Co. in Petersburg, in which Bailey lists all the rye and corn whiskeys he was selling as part of a mail-order business.

“It’s interesting how all that was back in the day,” Patterson says.

Boy, 8, dies after falling through ice at Hurley…