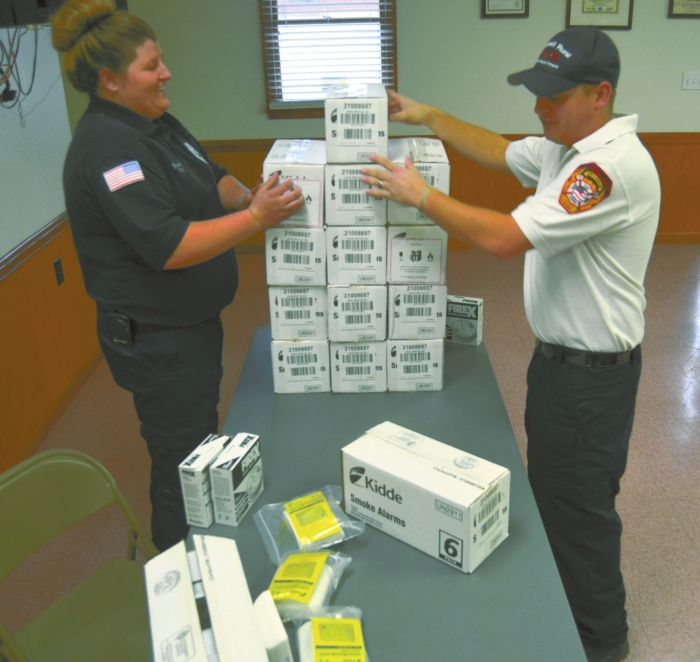 Rockwell Rural Firefighter Bobbi Thomas, left, and Chief Alan Shinn, stack more than 120 smoke detectors the department received through a state grant that allows them to give carbon monoxide monitors and smoke detectors to residents in the county who have a need at no cost to them. As the Fire and Life Safety Education instructor, Thomas installs the detectors. Shavonne Walker/Salisbury Post

Thomas, who is a certified fire and life safety education instructor, plans to remedy that with the help of a grant the department received earlier this month.

Thomas applied for the grant in December and received word earlier this month the department received it. She said to her knowledge, Rockwell Rural is the only volunteer county fire department awarded the grant in 2014 and this year.

She’s already installed more than 120 smoke detectors and is on her second batch, Thomas said.

Fire Chief Alan Shinn said the department has a virtually unlimited supply and can request more smoke detectors and monitors in order to meet the demand.

“Bobbie has put in a lot of work in order to get this grant,” Shinn said.

Thomas spent four months training, at her own cost, to become certified to install the monitors as well as to be able to teach fire and life safety to the public.

“The smoke detectors have to be placed in certain places in the home,” Thomas said.

Smoke detectors must be installed outside the kitchen, in a living room or den, inside a bedroom or outside a bedroom in the hallway. She said if someone feels their home does not have enough smoke detectors, they can call the fire department, make an appointment and she’ll install them.

She tests every alarm after its been installed, and if for some reason a smoke detector malfunctions, Thomas will return to replace it.

The smoke detectors and carbon monoxide monitors are provided by Kidde, one of the largest fire safety manufacturing companies in the United States. The monitors and the detectors will last 10 years and have a lithium battery.

If the devices are tampered with, Thomas said, an alarm will sound until she deactivates it.

She recommends homeowners test their smoke detectors once a month.

Thomas said anyone who is hearing impaired, whether they are deaf or hard of hearing, can also receive a smoke detector and alerting system.

The hearing impaired monitors alert homeowners with a strobe light, a different frequency alarm sounds and is followed by a vibration of the owner’s pillow or bed.

Thomas installed a smoke detector for a homeowner who lived on Johnson Dairy Road, and two months later the home caught fire. The homeowner was able to get out of the house because of the smoke detector, Thomas said.

She installed a smoke detector inside the home of a woman who had lost her home to a fire that did not have a smoke detector. When the woman moved into a new home, she had Thomas install smoke detectors inside her home and her mother’s home, Thomas said.

Shinn said his department asks homeowner who live outside of the Rockwell Rural fire district to make appointments with Rockwell Rural and Thomas will contact the fire station whose district includes that home.

To schedule an appointment to have a smoke detector or carbon monoxide monitor installed in your home, contact the Rockwell Rural Fire Department at 704-279-2171 between the hours of 8 a.m. and 5 p.m. or Bobbie Thomas at 704-223-4881.