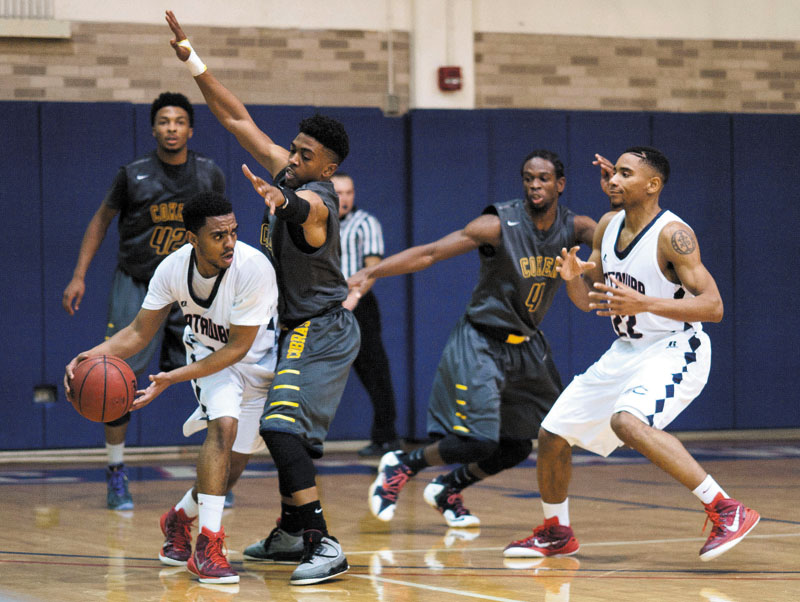 SALISBURY — Catawba’s joyous locker room sounded like a national championship had just been won, not a regular-season South Atlantic Conference game against a middle-of-the-pack opponent.

The victory at Goodman Gym on Wednesday was worth celebrating. Catawba beat Coker 71-66 in a 40-minute struggle in which the Indians’ largest lead was six points. The tense triumph ended a five-game Catawba skid that bottomed out Saturday with a dismal performance in a home loss to Brevard.

“We were determined to end that losing streak,” Catawba guard Ben Sealey said. “We came out and competed. We played this one like it was a playoff game.”

Catawba (6-8, 4-5) had not won since it beat Tusculum on Dec. 15, but 24 points and nine rebounds by K.J. Arrington went a long way toward stopping the slide. Sealey also was a hero. His 3-pointer with 1:05 left snapped a 63-all tie and put the Indians ahead to stay.

“I wasn’t shooting the ball well at all tonight, but I just kept telling myself that I was going to make a big one,” Sealey said. “I could see the ball was being kicked back around to me, I was ready for to take the shot, and I knew I’d hit it.”

Sealey also made the clinching free throws, calmly knocking down two with 6 seconds left to give Catawba a five-point lead.

“It was a tough game, a good win,” Catawba coach Rob Perron said. “We played very poorly Saturday, but it was a good sign that a lot of guys took that loss really hard. They came back to work, and in a game where both teams had their miniature runs, we stayed the course.”

Catawba received a tremendous offensive boost from Arrington. He made three 3-pointers in a span of four minutes to give the Indians a 51-46 lead with 10 minutes left.

But guard Errick Bethel had a 29-point night for the Cobras and didn’t let Catawba pull away. When Bethel drove for a layup with 3:10 left, Coker led 60-59.

Catawba’s next possession was the game’s most critical, and Arrington passed inside to Troy Warren, Warren’s left-handed baby hook gave the Indians the lead back. Two free throws by Arrington gave the Indians a three-point lead. Alex Cohen’s 3-pointer got Coker even, but that’s when Sealey answered with his clutch 3-pointer.

Jerrin Morrison added 11 points and blocked four shots for the Indians, and Perron was pleased that the Indians received a combined 16 points and 12 rebounds from the three-man inside tag team of Warren, Julian Sampah and Vismantas Marijosius.

“We lost a really good player in (injured point guard) Rakeen Brown, so it’s not just next man up, it’s every man has to step up,” Perron said. “We didn’t play perfect, but we were close to getting perfect effort tonight, and that’s what we’ve been preaching.”