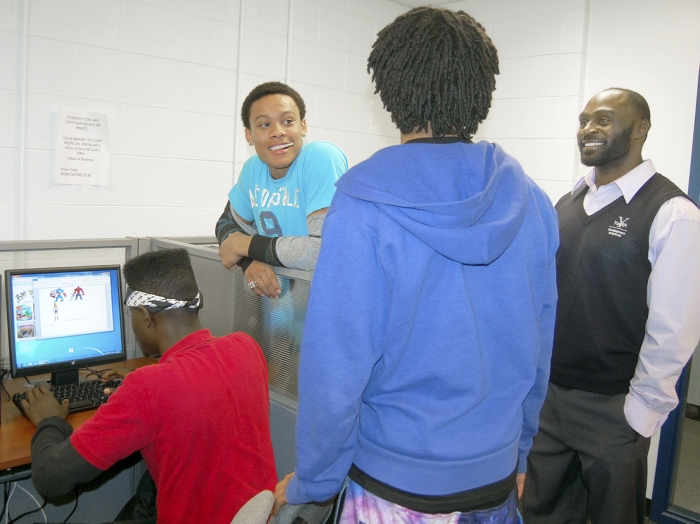 Students work on a marketing slideshow and talk with a mentor during LIFT After School Academy. Jeanie Groh/Salisbury Post

Darryl Bego grew up in the projects of southwest Ohio, an experience that he says inspired a new after-school program for older teens in Rowan County.

The local Juvenile Crime Prevention Council funds LIFT. Participants are either referred by their school resource officer or the juvenile justice system.

Bego has a passion for these older, at-risk teens.

“I grew up in the same environment that they did,” he said. “I grew up poor, on welfare and in the projects.”

“I know the forces that drive them to do things that, most of the time, they don’t want to do, Bego added.

These teens are the “most underserved,” yet “most important” segment of the youth population because they “have so much influence on younger children,” he said.

Bego’s own brother, an honor roll student and talented basketball player, had a considerable impact on where Bego is today.

“We were the only two of our age to escape our community unscathed,” he said, adding that both of them graduated high school, and that neither of them had a criminal record, drug addiction or children out of wedlock.

Bego followed his brother to Davidson College on a baseball scholarship, where he studied journalism and social philosophy.

The brothers made a point to go back to their southwestern Ohio community on breaks from school to mentor teens through their church. They would wear their college apparel whenever possible to open up conversations about how they got to college.

On Mondays, Tuesdays and Thursdays, from 3 p.m. until 6 p.m., up to 30 students gather at Livingstone College for LIFT. Livingstone social work and criminal justice majors serve as mentors and tutors for the students.

They begin with a hot meal, and then take time for homework and tutoring. The students have a recreation time, when they hang out, shoot pool or play basketball, followed by life skills training.

“When the kids come in, they come in very raw,” Bego said.

They often have poor interpersonal skills and a negative perception of after-school programs and adults.

“They struggle with commitment,” he said.

The life skills training occurs in three phases over two semesters and one summer.

During the first piece, the students work through a workbook where they learn basic career research and planning, entrepreneurship, financial literacy, job readiness and community service project planning.

The second semester is focused on working with a mentor to personalize what they learned during the first semester.

After they complete the first two semesters, the students are eligible for a paid summer internship. The following semester, students can come back as mentors for new students.

The students also get exposure to Livingstone College and get comfortable moving around on a college campus.

“It’s showing them where we ultimately want them to be,” Bego said.

He has run after-school programs for the past 14 years, and currently operates six programs in Mecklenburg and three surrounding counties. Over the years, he developed the curriculum for LIFT and built the program that expanded into Rowan County in October.

So far, the results are promising.

While he thinks they’ll see some improvements after the first semester of the program, the noticeable difference typically comes after the program’s second semester.