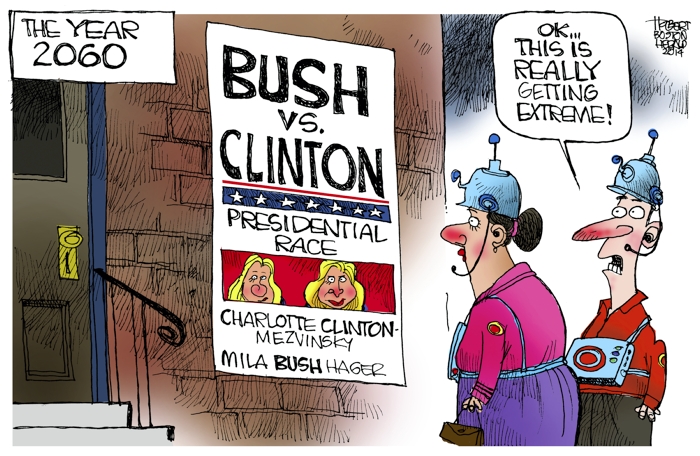 With the mid-term election year fought out between Democrats and Republicans, we can now turn our attention to a brand new year, along with a fresh round of new political fights. But this year, as prelude to the 2016 presidential election year, will probably focus more on intra-party battles as opposed to what we saw in 2014.

The “invisible primary” season covers the period ending with the previous presidential election until candidates declare their intentions to seek the White House.  During this phase, wanna-be presidents are subjected to the media speculation of whether they are considering running or not.

But beyond the media hype lies some careful attention and planning by candidates who are serious about a presidential run: often they are campaigning for mid-term candidates, such as Hillary Clinton, Chris Christie and Jeb Bush all did in this past year’s mid-terms.

Once the intervening mid-term elections are over, candidates then turn to courting those who really matter: those with funds and those with influence.  The move by Jeb Bush, along with prolonged consideration by Hillary Clinton, have all but frozen the invisible primary for many other Democrats and Republicans (former Democratic U.S. Senator Jim Webb not withstanding).

Because of name recognition and standing within their respective parties, Clinton and Bush can use the invisible primary to test the waters, both financial and among the party elites, in garnering forces to line up against other would-be nomination seekers.

But what if both Jeb and Hillary decide not to seek their party’s nomination? Then all bets would be off for both parties.

Without Bush or Romney, the GOP race would be a factionalized battle exposing the critical faultline within the Republican Party. As governors, Chris Christie, Scott Walker, John Kasich and Bobby Jindal all might come to the primary fight touting their executive experience, and would more likely be closer to the GOP establishment’s desired presidential candidate.

On the other side of the party fence, Mike Huckabee, Ben Carson, Ted Cruz, Marco Rubio and Rand Paul will have an interesting battle amongst the Tea Party activist wing of the GOP, which may be more in control of the primary contests in terms of participation.

The battle lines may be a bit murkier for Democrats if Hillary Clinton decides not to run.

Vice President Joe Biden (who would be 73 in 2016) would most likely carry the torch for the Obama wing of the party, but he would face a potential strong challenge by the populist wing, most likely led by someone like U.S. Senator Elizabeth Warren.

While former U.S. Senator from Virginia Jim Webb is exploring his options, New York Gov. Andrew Cuomo would be a serious contender because he may appeal to both the liberal and more moderate wings of the Democratic base.

If 2015 decides to break the mold of what conventional wisdom has been expecting, the two perceived front-runners would demur their runs, leaving a wide open field on both sides to wrangle over.

And then the epic battles for the hearts and souls of the two parties would commence.