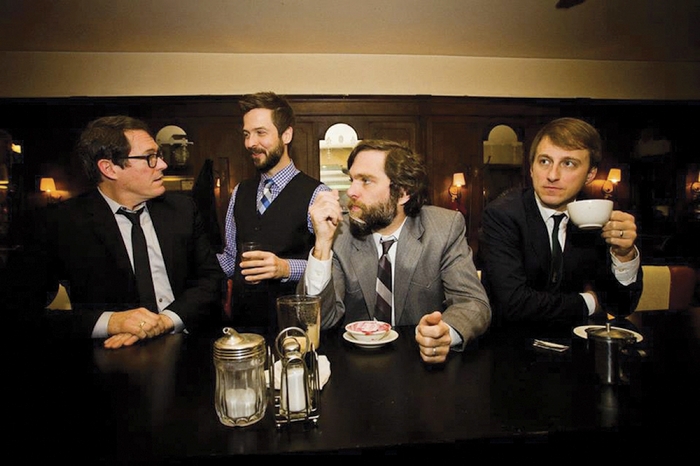 There may not be a band more passionate about creating and performing “North Carolina” music than the internationally-acclaimed group Chatham County Line, which will play Lee Street theatre tomorrow at 7:30 p.m. Tickets are $20 plus tax and are available online at leestreet.org, by phone at 704-310-5507, or the box office at 329 N. Lee St.

The band consists of Dave Wilson on guitar, lead vocals and harmonica; John Teer on mandolin and fiddle; Greg Readling on bass, piano and pedal-steel guitar; and Chandler Holt, who plays banjo for the band and who spent part of his youth here.

Holt says that the band’s tradition of displaying the North Carolina flag behind the stage at their concerts is every bit a celebration of home, no matter where they are performing.

“Going around the world and the country and playing has been a huge eye opener about how much people do know about North Carolina,” said Holt, who spent six years in Salisbury from fourth grade at Henderson Elementary School to his sophomore year at Salisbury High School. He says all his best friends are here in Salisbury and he considers it home.

“People love North Carolina. I never imagined that people in Holland, England and Ireland would feel the same about how we feel about this state. We are proud of where we are from. It’s that simple. I don’t see any reason why we shouldn’t celebrate it.”

But it’s how Chatham County Line celebrates North Carolina’s musical tradition that is so impressive. They are extremely talented musicians who have taken what they’ve learned from listening to legends such as Earl Scruggs and Doc Watson, and they’ve put their own subtle, youthful influences into the music as well.

“We have such a huge respect for people like Earl Scruggs and Doc Watson,” said Holt. “But we are not the band that is going to do exactly what they did. We are trying to do what is right for ourselves as well. North Carolina has a deep legacy and we want to continue to bear that tradition out in some sense.

“My playing is very much based in the Earl Scruggs style of banjo playing that he invented,” said Holt. “But we don’t play traditional bluegrass by any means. It obviously branches off of it. Dave Wilson writes most of the songs. And I try to play the banjo in a way that serves each song.”

For more than a decade Chatham County Line has served bluegrass and the state of North Carolina well. They are truly loyal ambassadors for the next generation, both here and abroad.

“Our looseness. Our carefreeness. That comes with playing in a band for a really long time.” Holt said. “That, you cannot fake. We trust each other and we know what each of us is going to do before they do it. And that allows you to do a lot of things during a performance that are subtle but can be huge for the song.”

East Spencer — Mayor Barbara Mallett and the East Spencer Board of Aldermen announce a special event on Monday, Jan. 19 to commemorate the life and work of Dr. Martin Luther King Jr. This is the second year of this event.

With a theme of “Kids for King — Biking for a Change,” the event starts at noon on Robin Circle of Long Street near the old Dunbar School.

Citizens may gather to begin a half-mile march, ending at the East Spencer Fire Department Annex.

At Robin Circle, the Town will hold a raffle for five bikes from donations to the East Spencer Police Department.

Long Street will be closed to traffic between noon and 2 p.m. for the bike ride. Traffic will be detoured off Long Street during this two-hour period.

Following the march, a special program for the youth will take place at the East Spencer Fire Department Annex. All youth are asked to bring a fact about the life of Dr. King for prizes. Refreshments will be served.

The public may participate by joining the noon Bike Ride and attending the special program. For more information, contact Mayor Mallett, Town Clerk Anneissa Hyde, or Administrative Assistant ShaTaira Bailey at the Town Hall at 704-636-7111.

The parade will begin in downtown Salisbury at 11 a.m. on the corner of North Main and Liberty Streets and end at Livingstone College on West Monroe Street.

‘Sounds of the Sixties’ at Lee Street Cabaret

Music for violin and piano in a free concert

Daniel Skidmore and Mary Ann Bills will be performing music for violin and piano in a free concert offered at 3 p.m. Saturday, Jan. 24 in the Omwake-Dearborn Chapel at Catawba College.

As a soloist, Skidmore has appeared numerous times with the Salisbury Symphony and has also performed concertos with the Winston-Salem Symphony and the North Carolina Symphony. In the summers, he gives violin and chamber music instruction at the Eastern Music Festival and serves as a section violinist in the Eastern Faculty Orchestra. He holds a doctor of musical arts degree in violin performance from the University of North Carolina at Greensboro. His teachers include Mary Wilson, John Fadial, Blair Milton and Charles Castleman.

Mary Ann Bills has been an adjunct professor of piano at Wake Forest University since 2001. She holds a bachelor of music degree from Washington State University and a master of music degree in accompanying from the University of North Carolina – Greensboro. In addition to her teaching, Bills works as a staff accompanist at the University of North Carolina School of the Arts where she serves as Cantata Singers accompanist as well as music director and pianist for both the undergraduate opera workshop and for the A. J. Fletcher Opera Institute’s Educational Outreach Program. She also heads the accompanying staff of Chamber Music on the Hill, an intensive summer chamber music program.

Skidmore and Bills met in 2000 at UNCG where they were both graduate students. They enjoyed playing several recitals and other performances, and they are thrilled to be playing together again.

Meet the cast of PPT’s ‘Macbeth’

The Piedmont Players youth theater will take on “Macbeth,” Shakespeare’s shortest tragedy that follows the story of a brave Scottish general named Macbeth and his Lady as they descend into the realms of arrogance, madness and death. Public show dates are Feb. 20-21 and 27-28.

The Salisbury VA Medical Center is taking submissions for the local level of competition of the National Veterans Creative Arts Festival. Winners in the art competition will be announced Feb. 21.

Applications for the competition are available through the Recreation Therapy office located in Building 6. Entries are due by 7 p.m. Feb. 9.

The competition includes 51 categories in the visual arts division and 100 categories in the performing arts. First place winners from this local show will be entered into the National Veterans Creative Arts Festival, taking place Oct. 12-19 at the VA Medical Center in Durham.

The arts competition is sponsored by the Salisbury VAMC Recreation Therapy Department and the American Legion Auxiliary.

Lee Street theatre’s Original 10-Minute Play Festival is in its seventh year. Whether you are an experienced playwright or trying to complete your bucket list, submit a play and have the chance to see your ideas come to life.

1. The 10-minute play must be a comedy and incorporate this year’s theme of “Yard Sale.” Be as creative as you wish within the theme.

2. Must be easy to stage on a black box stage with limited single set and minimal props.

3. No more than four characters.

6. Script(s) must not have been previously staged by anyone in any way.

4. Email your script in PDF format to info@leestreet.org no later than Feb. 28.

Other guidelines and submission info can be found at www.leestreet.org

Kannapolis — The Southern Piedmont Singers will be accepting new members (8th grade and up) from Sunday, Jan. 18 through Sunday, Feb. 8.

No audition or experience is required. To join, simply show up to a rehearsal, which are on Sundays at 2:15 p.m. at Kimball Memorial Lutheran Church, 101 Vance St.

This is a fun, energetic, diverse and welcoming group of singers with no boards, no rules, just a love to sing music of all genres and styles. SPS is under the direction of Damien Evans and accompanied by Joel Everett.

Kannapolis — The Piedmont Choral Society will resume rehearsals for its spring concert series on Monday, Jan. 19 at 7 p.m. at Forest Hill UMC, 265 Union St. N. The group meets each Monday from 7 to 8:30 p.m.

New members are being accepted in all sections. For more information or to schedule an audition, contact 704-699-6053 or email kayy2000@gmail.com by Jan. 25. Prior choral experience or vocal training is not required.

Plans for this semester include two formal concerts in early May, a performance for the annual meeting of the Military Order of the Purple Heart at the Charlotte Motor Speedway Club on May 8, and several all patriotic music concerts scheduled for late June.

One of the patriotic concerts will be designated to benefit a chosen local non-profit.

‘Our Earliest Cultures’ opens at The Rowan Museum

From 1 to 3 p.m. on Sunday is the opening reception in the DAR Room to honor exhibit contributors and guests.

This exhibit reflects the history of Rowan County dating back to 12,000 BC.

The exhibit focuses on early Native American artifacts which include pottery, stone tools and points.

Adjacent to the display is a case housing two computer screens. One is a point identification program. Guests may bring in items from their personal collections and use the program to identify their own points.

The Rowan Museum is located at 202 N. Main St. and is open Friday through Sunday 1 to 4 p.m. For more information or to schedule group tours, call 704-633-5946 or email rowanmuseum@fibrant.com