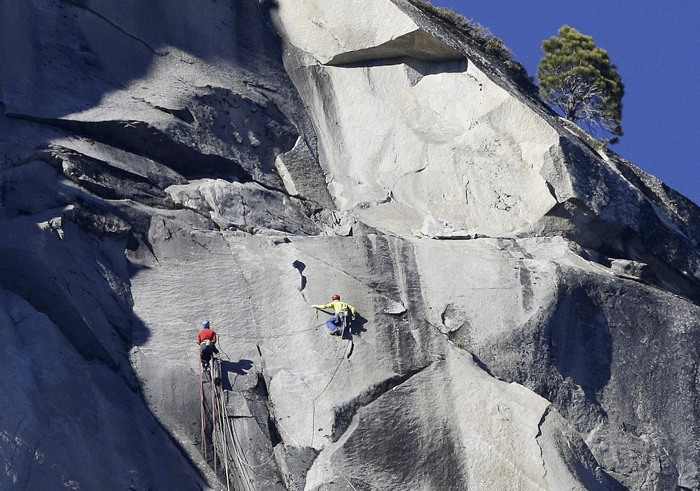 Kevin Jorgeson, left, and Tommy Caldwell climb El Capitan, Wednesday, Jan. 14, 2015, as seen from the valley floor in Yosemite National Park, Calif. Caldwell and Jorgeson became the first to free-climb the rock formation's Dawn Wall. They used ropes and safety harnesses to catch them in case of a fall, but relied entirely on their own strength and dexterity to ascend by grasping cracks as thin as razor blades and as small as dimes. (AP Photo/Ben Margot)

American and French intelligence officials think al-Qaida inspired, but did not execute, the recent terrorist acts in France, making any similar attacks very difficult to thwart.

3. WHY THE POPE’S VISIT IS A SECURITY CHALLENGE TO THE PHILIPPINES

Francis, who loves breaking out of protection cordons to greet crowds, will lead a Mass that could draw 6 million people and will visit the typhoon-ravaged central part of the world’s third most populous Catholic country.

The movie industry’s most prestigious awards are almost certain to steer clear of blockbusters when shortlists are announced today.

Undoing Obama’s executive actions would expose hundreds of thousands of younger immigrants to expulsion from the U.S.

Tommy Caldwell and Kevin Jorgeson become the first to free-climb the 3,000-foot granite pedestal of El Capitan — a feat that many had considered impossible.

Four high-ranking executives have been reassigned, the biggest leadership shift since the agency’s director was forced to quit last year.

The publicity-shy novelist, who is a perennial candidate for the Nobel Prize, will answer questions readers pose on a website until the end of the month.

9. WHO IS FLYING THE LATEST JET

Qatar Airways’ first flight of the state-of-the-art Airbus A350 is taking passengers from the gas-rich nation’s capital Doha to Frankfurt.

She’s recruiting veterans of Obama’s two successful White House campaigns as she builds her team for an expected presidential bid.

Rowan legislators return to Raleigh with similar priorities in…