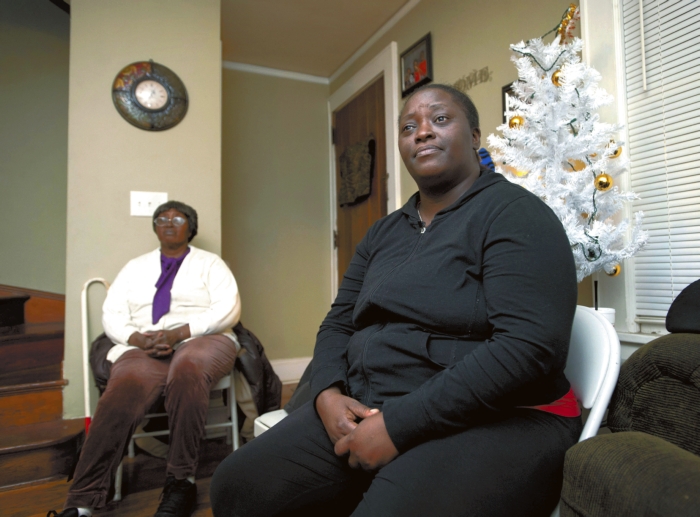 JON C. LAKEY / SALISBURY POST Nykia Ford, the mother of 8-year-old Kymello McLane, stops to collect her thoughts as she tells visitors about him on Tuesday evening. The outgoing youngster lost his life after falling though the ice that covered a pond in Hurley Park on Sunday afternoon. Visitors, which include family, friends, emergency personal, school personal and strangers have been coming in steady fashion to Ford's home on North Ellis Street to offer condolences and bring food and supplies.

The parents of Kymello McLane, an 8-year-old who died after falling through an icy pond earlier this week, say he was an outgoing and adventurous child.

Kymello’s mother, Nykia Ford, said she’d given her youngest child permission to go to Hurley Park with two friends Sunday, as she had before.

“He was responsible, and it was just another day,” Ford said.

He’d begged her to let him play outdoors, and Ford said Kymello knew he was supposed to “be back inside before the sun went down.”

The Overton Elementary School student and two friends, both 11, were at the park playing as they’d done before. The three began throwing rocks on the pond, which had frozen over, Ford explained.

When the ice didn’t break, the boys believed it was solid. Kymello — ever curious, his mother said — went onto the ice. He fell through and didn’t resurface. The boys used sticks to try to reach Kymello, but they couldn’t.

The pond is a collection area fed by a natural creek and stormwater runoff and is located within a floodplain.

One of the boys ran for help and called 911.

The boys’ mother went to Ford’s house and told her she needed to get to the park.

“I said, ‘What did he do?’ ” Ford recalled, thinking her son was in trouble.

“They said Kymello fell into the lake,” she said.

Ford, still in her car, called into her house because she was in disbelief and thought maybe Kymello had run back home. Her boyfriend said Kymello wasn’t home. She rushed to the park.

When Ford arrived at the park, she saw her son’s bicycle, and then saw his hat bobbing on the water.

“I knew he would never leave his bike unattended. I knew he was gone,” she said.

When rescuers pulled Kymello from the icy water, he was responsive, Ford said.

Ford grabbed Kymello’s hand as rescuers tried to resuscitate him. She spoke to him. He died hours later at the hospital.

He said his son knew everybody.

“He was very much loved,” McLane said.

He said his son was born out of his time. Ford called her son an “old man in a little man’s body.”

A blue and black scarf that matches the gloves and hat Kymello wore that day was carefully draped over a guest book for visitors to Ford’s home. A toy car also sits on a stand where friends and relatives have left condolences.

Ford recalled telling her son to get his coat that day.

“That day he was eager to go with Noah and Elijah,” she said.

Kymello had about 40 toy cars in the living room that he straightened up that day before going to play. He even cleaned his room, Ford said with a smile.

No one has brought it up, but Ford said she knows it’s on everyone’s mind because it has been weighing heavily on her mind: Why did she let Kymello play at the park without adult supervision?

“As a parent, your job is to protect,” she said.

She’d always allowed him to hang out with his friends in a group, and he always made sure he asked permission before going anywhere.

His friends, brothers Noah and Elijah, often played with Kymello and would routinely walk him home.

She hasn’t had a chance to speak with the boys, but knows they were understandably terrified that day.

Ford is thankful to Elijah and Noah for trying to help save her son.

“The last thing is, I don’t want them to feel like I’m mad at them. They did what they could,” she said.

That Sunday morning, Kymello had been making rubber friendship bracelets, and when Ford awoke that day he’d slipped one around her wrist.

Tony McLane said he recalls very little of the day he learned of his son’s death.

His phone died, and by the time he recharged it he’d had several voice mails and text messages telling him Kymello had been involved in an accident.

When he arrived at the hospital, he knew something was wrong because everyone was leaving. He was overcome with emotion and had to get out of the hospital, McLane said.

McLane is a tractor-trailer driver and has fond memories of his son going on trips with him. He recalled a trip to Thomasville where Kymello jumped out of the truck and tried to “help” his dad by grabbing straps to attach a load.

“Anything I’d do, he tried to do it too,” McLane said.

“My son is with God and I know I’m going to see him one day,” McLane said.

Both Ford and McLane said they’ve been contacted by school teachers and other staff from Overton Elementary School who’ve shown tremendous support to them.

Some of the students in Kymello’s class have been making and sending cards expressing their condolences, Ford said.

A few students even made the cards into paper airplanes because it’s what Kymello liked to create.

His father recalled showing him how to make paper airplanes.

“The next day his teacher said he was making paper airplanes for everybody,” McLane said.

“He would make them so we could fly them together,” Ford said.

“They’re handling it beautifully,” she said, adding that it’s difficult for children that age to process intangible things.

McLane’s classmates gathered in the media center with counselors Monday, talking about how they heard about his death, sharing memories and making cards for his family.

They shared how he was such a good football player, that he liked to make things with his hands and that his favorite thing to do was make paper airplanes, Tunks said.

“He was all boy,” she said, adding that he had an outgoing personality that everyone liked.

The students then took those memories and put them into cards for McLane’s family.

“Some of the cards they made were just beautiful,” Tunks said. “They each wrote something very personal inside.”

One student even folded his into a paper airplane when he was done with it.

Ford said the church is accepting donations on behalf of the family to help offset funeral costs. Donations are also being accepted by James Alexander at Noble and Kelsey Funeral Home. Ford said she’s not working and it’s a struggle.

“He made himself known,” Miller said.

Word spread to other members of the football team, and the children have been handling as well as can be expected.

“Our organization is family. It’s not just that we lost a player. We are deeply hurt by this,” Miller said.

Miller said Kymello will definitely be missed by them all.

HSF offers vacant lot to anyone willing to move…