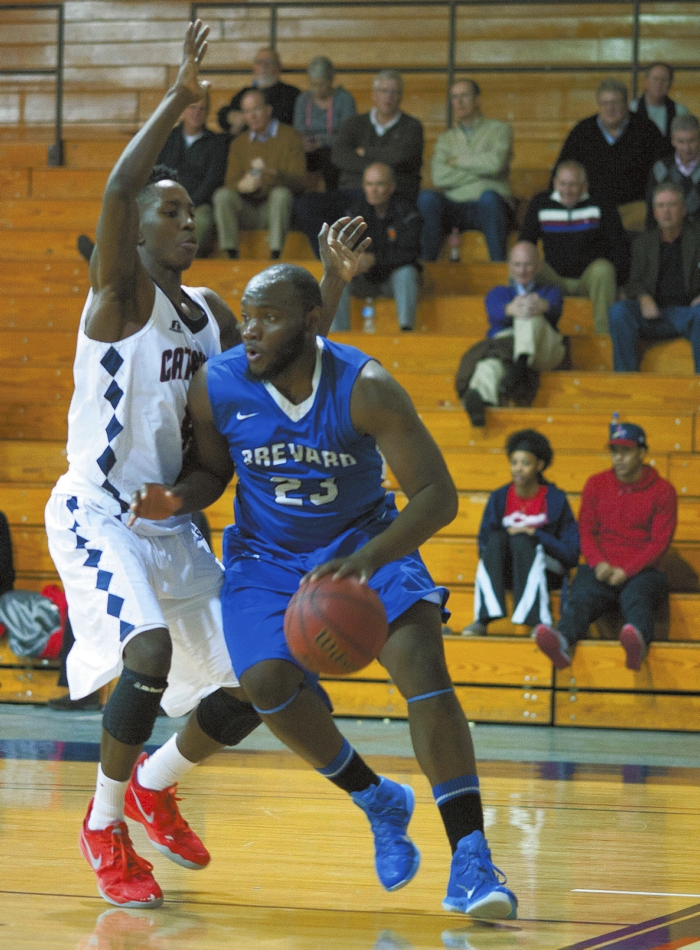 SALISBURY — Brevard senior Darius Moose has a chance to lead the South Atlantic Conference in scoring, but that’s not what the former Carson standout wanted to talk about after Saturday’s 87-75 win at Catawba.

If two in a row doesn’t sound like a big deal, it is for Brevard.

The Tornados hadn’t taken back-to-back league games since 2011 when Moose was a freshman. That 2010-11 season was the last time Brevard played in the SAC tournament.  Only eight of the 12 league teams qualify for this year’s event, so Brevard (3-5) beating Catawba (3-5)  was a boost for the Tornados, who jumped from 11th to a four-way tie for seventh.

“I’ve actually been in a shooting slump, and I’ve beating myself up a little bit,” the 6-foot-3, 220-pound Moose said. “I get double-teamed, but I’ve got talented teammates. They’ve kept us going when I’ve been off.”

When players are on weak teams, individual numbers are all they have to keep them going, and that was the case for Moose in his sophomore and junior seasons. The Tornados won only nine times in those two seasons, going 9-45 in 2011-12 and 2013-14.

After sitting out the 2012-13 season to get back on track academically, Moose returned to stuff stat sheets as a junior in 2013-14.  He poured in 19.8 points per game and led Brevard in rebounding, but he was only Honorable Mention on the All-SAC team. It’s easy to say he was snubbed, but accolades are elusive when the team struggles.

But this season Moose is on a team that has the necessary speed and height to compete  — and he’s the leader of that team.

“He’s matured a ton, and now he’s the unquestioned leader for us,” Brevard coach Lee Burgess said. “I’ve encouraged him to be more vocal, and he takes his leadership role seriously. A team is going to play as well as its leader. His teammates will follow him. He understands what a big responsibility he carries.”

Moose’s game is different now than when he starred at Carson High for coach Brian Perry. He was a post player then and piled up a school-record 1,768 points. He was such a consistent scorer in the paint that he drew double teams as soon as he touched the ball, and he became adept at kicking out to sharpshooter Nick Houston and slasher Cody Clanton. He was Rowan County Player of the Year as a senior in 2010 after leading the Cougars to a 21-6 season.

Moose wasn’t heavily recruited because there were questions about how well his physical game was going to translate to the college level. But Mike Jones, the coach at Brevard then, liked Moose. Moose rewarded Jones’ faith by becoming a starter right away and a member of the SAC All-Freshman team.

Moose showed Saturday at Catawba how far he’s come in his college career. He can still post up when he has a matchup that Burgess likes, but he roams the perimeter more than the paint and has developed into an accurate outside shooter.

“I worked really hard in the offseason with [Carson assistant] Dadrian Cuthbertson on my shot,” Moose said.

Moose is third in the SAC in scoring at 18.5 points per game, with two players just above him at 18.6. He’s made more field goals than anyone in the league, which isn’t a surprise, but he’s also sixth in the SAC in 3-pointers made with 36. He shoots a solid 43.4 percent from the 3-point line and drilled three against Catawba on his way to 18 efficient points.

“Moose is a difficult matchup,” Burgess said. “He’s only 6-3, but he has long arms and he’s very strong, so he’s tough to handle in the post. And he can take bigger guys outside. He’s a threat from the arc, a 40-plus guy.”

Moose was a first-team All-SAC preseason pick prior to this season.

Burgess is Moose’s third coach at Brevard, following Jones and Mark Prosser. Moose is only 27-58 wearing a Brevard uniform, but he’s produced 1,264 points and great moments. He put together a 32-point game earlier this season when Brevard won at Lenoir-Rhyne. He was named SAC Player of the Week and D-II Stud of the Week for that outing.

“There have been ups and downs,” Moose said. “But I’ve gotten to play for three great coaches, and I’ve made great friends. No regrets about going to Brevard and sticking with Brevard. I’ve gotten to see white squirrels. I’ve gotten a free education.”

Moose stayed in the mountains even during that tough year when he had to sit. He hopes to play professionally overseas, but whether or not that works out, he expects to leave Brevard with a business degree. He’s circled May 2 as his graduation date.

“As long as he takes care of things this semester, he’s going to be walking across that stage with a diploma,” Burgess said. “We’re extremely proud of him.”