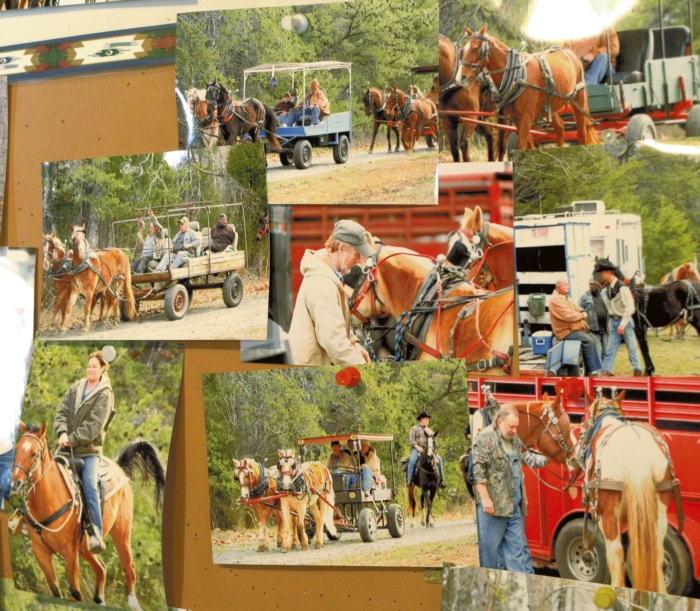 Hugh Fisher/For the Salisbury Post Memories of events from recent years are on display at the Eastern Rowan Saddle Club outside of Rockwell. What started as a group of friends in the late 1950's was incorporated as a non-profit corporation in 1964 to promote equestrian activities in the county.

ROCKWELL – Picture yourself in the late 1950s in Rowan County.

It’s only been a few decades since tractors transformed farming, and cars took over the roads.

Even though well-traveled routes like Old Beatty Ford Road were still paved with dirt and gravel, the days of horses and buggies were a thing of the past.

But young men still loved horses. And, when Gary Rummage’s parents bought him a pony, it was natural for him to ride it to his friends’ houses.

That’s how the Eastern Rowan Saddle Club got started: a group of friends and neighbors who loved riding horses.

And, 50 years after the informal gatherings gave birth to a not-for-profit corporation, the Eastern Rowan Saddle Club is stronger than it’s been in years, members say.

“And also, to try to teach children to be courteous to others, and kind to animals,” said club treasurer Carolyn Tucker.

Saturday, about 40 people gathered at the clubhouse off Old Beatty Ford Road. There were no horses, just people – including many kids – and they gathered to celebrate the start of another year in the life of the Saddle Club.

Throughout the years, the group has kept alive a tradition of pleasure riding and horsemanship that started in the nearby fields and trails at a time when it seemed the era of horses in the rural South had ended.

“Gary Rummage was just a young boy when it really started,” Honeycutt said in a phone interview.

Although she wasn’t able to attend Saturday’s luncheon, Honeycutt said she has tried to support the club through the years.

Honeycutt, known affectionately as “Mrs. Dot,” remembers when Gary Rummage needed a way to ride his pony, back in the late ’50s.

The Honeycutts gave him permission to ride across their land, and that was the start of the trail rides, she said.

Back then, the site behind Honeycutt’s home where the Saddle Club meets for events “wasn’t more than just a briar patch, and rocky.”

“It took us years to pick up the rocks and clean out a place to even have an arena or anything over there,” she said.

When her son was a boy, Honeycutt said, the family took part in the early wagon trains.

“But mostly, I wound up in the kitchen!” Honeycutt said, laughing.

The meals she cooked for many Saddle Club events through the years earned her the title of “Kitchen Queen.”

“In fact, they gave me a belt buckle last year … and a big crown and sash and all!” Honeycutt said – the buckle inscribed with “Kitchen Queen,” as a tribute to years of chicken ‘n’ dumplings, steaks and more for the riders.

Rummage, now 71, said the early days of pleasure riding were all about enjoying the outdoors on horseback.

The club’s founding families are recorded on a plaque at the clubhouse.

“Ray Shipton was probably the main person who got this thing started,” Rummage said. “He was president of the Saddle Club for years.”

Back when Old Beatty Ford Road was still a dirt road, the Shiptons, Rummages and other families organized trail rides, while the young men rode their horses where and when they could, Rummage said.

“Me and the Hamptons and Shiptons would ride to Immanuel Church to Luther League,” Rummage said. “Tie the horses out behind the church and go to Luther League. We were young guys, way back then!”

In the ’60s, the club started holding horse shows on the Rummage family’s land off Gin Road, which was still called Holshouser Road in those days, he said.

“We had a few little shows over there … then we purchased land off Old Beatty Ford Road, and started there,” Rummage said.

With fewer cars on the roads, and fewer people on the land, those early trail rides were something to see, he said.

“I can remember riding to Lentz’s Harness Shop, out toward Mount Pleasant,” Rummage said. “We rode on these roads around here. But I wouldn’t be about to ride a horse on Old Beatty Ford Road now!”

Even so, annual Wagon Train rides hosted by the Saddle Club have drawn over a hundred participants in years past, and remain popular today.

It hasn’t always been easy. When Starnes joined the club in the 1980s, membership had dwindled to just a handful of families.

Scott Hellems, vice president, said that when he and wife Cindy joined the club 15 years ago, “there were only about eight.”

But today, the horse shows which are the Eastern Rowan Saddle Club’s mainstay have led to a surge in membership.

In addition to the Wagon Trains held twice a year, six horse shows held throughout the spring, summer and fall challenge youth and adult riders in competition.

There are also social events along with the rides, including dinners and dances, that attract horse-lovers as well as riders, Starnes said.

The new generation of equestrians is comprised largely of girls and young women, as several members noted.

“It’s funny to me that, back when we started, it was mostly boys, and now, it’s mostly girls that do a lot of the riding,” Honeycutt said.

At Saturday’s luncheon, Phil and Brenna Austin, of Kannapolis, talked about their daughter Elizabeth’s experiences there.

The Austins train gaited horses, and Phil said he first learned about the Saddle Club because of the shows.

Elizabeth said she enjoys the horse shows as a chance to spend time with family, as well as to compete. About three years ago, she won her division in the local shows, Elizabeth said.

“It’s great to be able to promote horsemanship and have something for these young kids,” Phil Austin said.

Today, as a freshman at N.C. State University, she competes in National Barrel Horse Association events.

“I’ve grown because of this place,” Catanese said. “It’s taken me to other barrel races, and to the NBHA Youth Worlds in July.”

Catanese said she’s glad to see the number of people who support the Saddle Club. “This is kind of my home!” she said.

Gary Rummage said it made him feel “really proud” to see the Saddle Club going strong.

What started as local families’ way of enjoying life on horseback is introducing a new generation to those joys, in Rowan County and beyond.