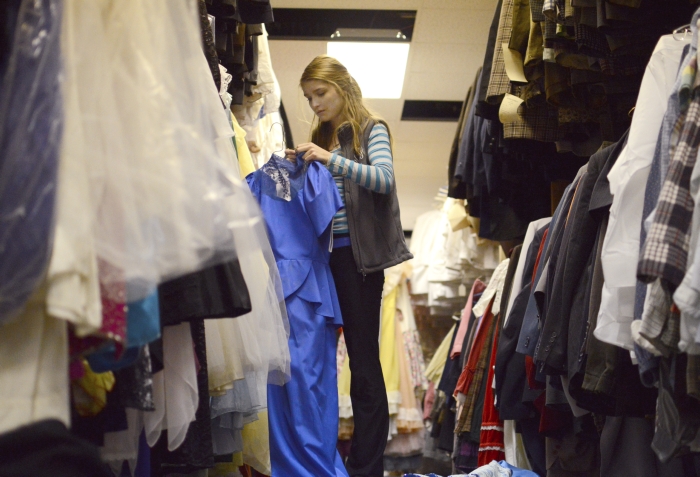 It’s like a giant, walk-in closet, but every piece of clothing is for rent.

Situated below road level and underneath Innes Street Drug is the newest addition to the Piedmont Players Theatre company. Piedmont Players purchased a Greensboro-based costume company in December and is already beginning to ship orders by mail. It isn’t yet open to walk-in customers.

One month ago, when Piedmont Players bought the Eastern Costume Co., boxes and costumes were simply placed in piles. It took two moving trucks multiple trips to get the more than 40,000 costume pieces from Greensboro to Salisbury.

Now, the shop is beginning to take shape.

“Last Thursday at about 3:30 was the watershed moment,” Piedmont Players’ Director Reid Leonard said Monday. “It was the moment where the last costume came off of the ground.”

Aside from renting costumes to other groups, such as schools and theater groups, Leonard and Piedmont Players’ Marketing Director Josh Wainright said Piedmont Players would also be open for individual rentals, such as for Halloween or parties. No date has been set yet for a formal opening.

“Not only are we going to be doing our Piedmont Players shows, but we’re also going to be shipping costumes out for shows around the country,” Leonard said. “We’ll also be renting locally and to individuals, like if they’re going to a party, a tuxedo or a prom dress.”

Eastern Costume Co. owns about every costume imaginable, and several of each.

“If more than 10 guys come looking for pumpkin outfits at the same time, we’ve got that covered,” Wainright said.

For Easter, Eastern Costume Co. even has 15 bunny outfits. An entire rack is dedicated to wedding dresses. Trademarked or copyrighted outfits may be the only ones missing from its massive ensemble.

“In the grand scheme of the costume business, some are licensed,” Leonard said. “Or, you have to pay fees.”

To help with licensing limitations, Leonard said Eastern Costume Co. would partner with a Charlotte-based company that owns rights to licensed characters.

Part of the reasoning for Piedmont Players purchasing Eastern Costume Co. was the departure of multiple people who helped design costumes in late 2013 and early 2014. The Eastern Costume Co. purchase may not bring them back, but Leonard said it would provide a boundless number of costumes.

Another benefit Leonard and Wainright mentioned was added revenue. Both said they’d rather not raise ticket prices for shows put on by Piedmont Players. Adding the costume company will help generate additional revenue without raising prices. The total purchase price for Eastern Costume Co. was about $150,000.

Leonard said the purchase fit well within Piedmont Players’ existing mission statement, as the company needs costumes to put on shows and had been renting from Eastern Costume Co. for years.

“This is a stock that’s been building over 30 years, so the purchase was a chance to acquire that stock,” Leonard said.

The staff members of Eastern Costume Co. will consist of two full-time managers and a few part-time workers, Leonard said. Some of the part time workers, especially when school is out, would be college students, he said.