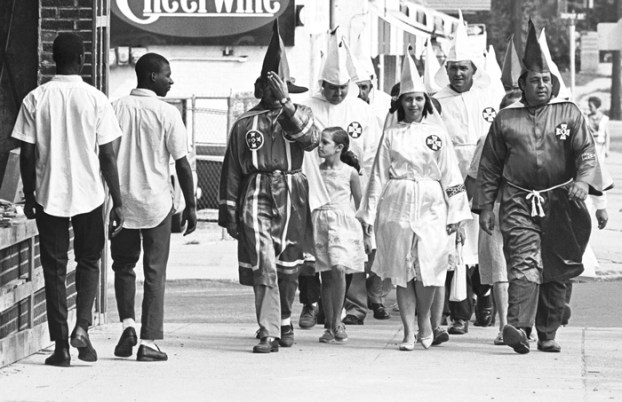 Not the county’s proudest moment

After 50 years, the memories fade a bit, but Price Brown Jr. figures he patrolled Salisbury’s downtown during three or four different Ku Klux Klan street walks in the 1960s.

Brown, one of only three black Salisbury Police officers at the time, says the department always required that the person who obtained the permit be present on the day of the march. Officers also spelled out to the Klan marchers that there would be no standing — they had to keep moving once their procession started.

Typically, the Klansmen and their supporters would gather first off Liberty Street in the parking lot across the from depot, “where we could keep an eye on them,” Brown says. The Klansmen would then walk up Liberty Street to North Main, move south all the way to Horah Street, turn around and end up near the Rowan County Courthouse.

Some Klan speakers would address the crowd at the courthouse before everybody headed back to their cars and left.

“As long as they followed the rules, they were OK,” says Brown, who retired in 2000 after 36 years with the department.

Brown was on duty one hot summer day in 1965 when emotions were running high between the Klan marchers and a group of African-American citizens gathered on Lee Street.

Brown recounts how that tense situation was diffused in an interview he gave for the documentary “Klansville, U.S.A.,” which will air from 9-10 p.m. Tuesday on PBS. It will be obvious from anyone watching Tuesday night’s program that this period, when KKK Grand Dragon Bob Jones made Rowan County the state headquarters for Klan operations, was not the county’s proudest moment.

“Klansville, U.S.A.” documents how the Klan reemerged in juxtaposition to the civil rights movement. But the real surprise in the 1960s was how most of the growth in dues-paying Klan members happened in North Carolina, viewed at the time as one of the more progressive Southern states.

“Klansville, U.S.A.” won’t be flattering to Rowan County. It won’t be a DVD tourist officials make available at the visitors center here. But it’s good to remember something Catawba College history professor told the Post’s Mark Wineka about that period.

Yes, some sad episodes and deplorable behavior happened then, Freeze said, but the real story was all the people who acted out of bravery.

The names of Wiley Lash, Paul Bernhardt, Jesse Carson and Harold Isenberg come to mind. Think of all the individuals who dared to be first in breaking down the color barriers in schools, in movie theaters, at lunch counters and in front of buses.

Rowan County — and every other community in that era —had its share of heroes, men and women who didn’t hide behind ignorance, intimidation or costumes. Thank goodness for that.

When the Klansmen marched in Salisbury, Brown reminds us, they were told to keep moving.

It’s good to remember that at the same time, many brave souls were moving, too — in the opposite direction.

The drowning Sunday of 8-year-old Kymello McLane in the icy pond at Hurley Park saddens the entire community. A giving,... read more