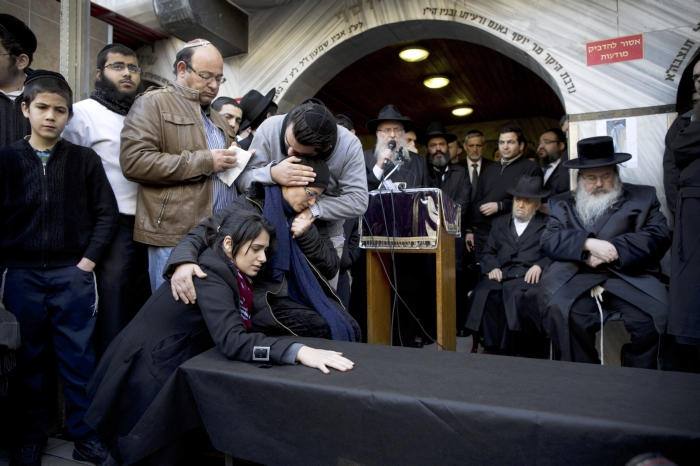 Family and relatives of French Jew Yoav Hattab, a victim of the attack on a kosher grocery store in Paris, gather for his funeral procession in the city of Bnei Brak near Tel Aviv, Israel, Tuesday, Jan. 13, 2015. Israel geared up on Tuesday for the solemn funerals of four Jewish victims of a Paris terror attack on a kosher supermarket amid rising concerns over increased anti-Semitism in Europe. Hattab will be buried in Jerusalem along with other victims of the attack. (AP Photo/Oded Balilty)

The pontiff’s message to the nation where Catholics make only 7% of the population is to pursue the truth about civil war atrocities.

The satirical weekly’s first edition after the terrorist attack will feature a cartoon of the Prophet Mohammed on its front page.

3. BODIES OF JEWISH VICTIMS OF PARIS ATTACK ARRIVE IN ISRAEL

The four who were killed while being held hostage in a kosher supermarket were flown from France for a solemn funeral ceremony which leading political figures will attend.

The cockpit voice recorder may shed light on why the Airbus A320 crashed less than halfway through its flight to Singapore.

6. WHAT ROMNEY COULD FACE IF HE RUNS AGAIN

Presidential candidates in 2016 are expected to include more than a dozen Republicans with legitimate White House resumes.

7. WHY THE NTSB IS PROBING DC METRO INCIDENT

Heavy smoke from an unknown source led to one death and forced hundreds to evacuate the L’Enfant Plaza station during rush hour.

Police say a SWAT team member and a former police detective fatally shot a mentally ill homeless man who had frequent run-ins with the law.

9. HOW FIDEL CASTRO IS REBUTTING RUMORS OF HIS DEATH

Castro, who hasn’t been seen in public for more than a year, reportedly writes a letter to soccer legend Diego Maradona with references to current events.

The legislation could win final approval and be sent to the White House by the end of next week.