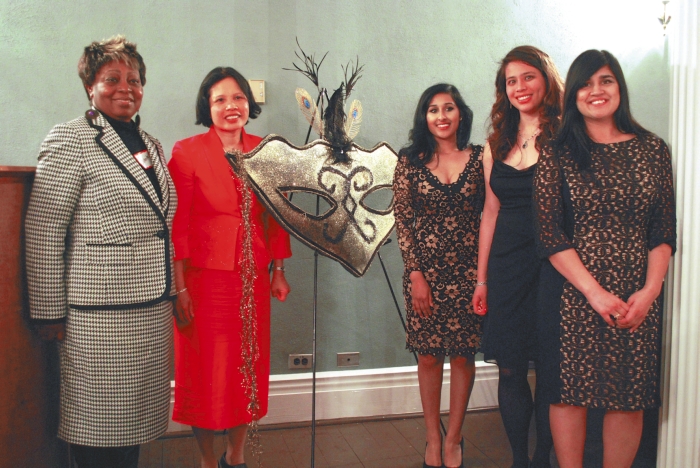 Former FBI Victim Assistance Coordinator Juanita Miller, left, stands with human trafficking survivors Andrea, Holly, Alex, and Jasmine at Triad Ladder of Hope's First Annual Human Trafficking Awareness Gala at the Rowan Museum on Saturday evening. The victims, named by their first names only for protective purposes, shared their stories in all of their despair and truth. Elizabeth Roy, for the Salisbury Post.

“Our mission is to be proactive and not reactive,” Duncan said.

Approximately 20.9 million victims of human trafficking are enslaved and exploited for sex and labor each year globally, according to the International Labour Organization.

On Saturday evening, four of these victims stood before the audience and shared their stories in all of their despair and truth. The victims are identified by their first names only, for protective purposes.

Three sisters enslaved in Spain from when they were ages 4, 7, and 10 spoke of how their biological mothers were promised education and opportunities for their daughters if they handed the girls over to a trafficker. The sisters, Alex, Jasmine, and Holly, were later moved to Monroe, N.C., by their captor, where they lived for almost six years before being rescued.

“Think of the most tragic thing you can think of and times it by ten,” Holly said of the sisters’ 13 years as captives working 18-hour days and living in abuse and fear.

Another powerful story was that of Andrea, a woman taken into slavery under the pretenses of paid nanny work while she was living in the Philippines.

“When an opportunity comes along, you take it, especially if it comes with promise,” Andrea said.

Once she realized the unfairness of her conditions, it was too late, Andrea says. “I didn’t have any family or anyone close to complain to, so I just accepted it.”

Andrea too was moved to the U.S. by her captor. After almost 20 years of psychological abuse and grueling work with little to no pay, Andrea was rescued by Triad Ladder of Hope president and founder Sandra Johnson.

The organization is currently assisting Andrea with travel documents so that she can see her mother in the Philippines for the first time in 24 years.

For all of the victims who shared, their rescue and rehabilitation began with a community member observing that something was awry and alerting authorities. This awareness, the victims stressed, is critical to fighting human trafficking.

“Get to know people in your community, because you never know where it might be happening,” Alex said.

The masquerade theme of the gala spoke to how much is unknown about the issue, due to both a need for increased awareness and the elusiveness of the traffickers.

“Unfortunately so much of this goes unreported,” said Triad Ladder of Hope board member Stefanie Redhing. “It’s a silent crime.”

The gala was the first major fundraiser for the non-profit, faith-based Triad Ladder of Hope organization, which originally set a goal of 100 gala attendees. The target was quickly surpassed, with guests attending from cities including Salisbury, High Point, Greensboro, and Charlotte.

“The Salisbury community is definitely showing their support in the fight against modern day slavery,” said Mitzi Weber, Triad Ladder of Hope board member.

When financially possible this year, Triad Ladder of Hope will open a satellite office in Salisbury with Weber as its executive director. Weber’s goals for her future role include increasing local awareness, fundraising, education and prevention, as well as the establishment of a safe house for victims.

Weber and her fellow volunteers are firsthand witnesses to the increasing levels of awareness of human trafficking in Rowan County. Three years ago, Weber and others from First Baptist Church of Salisbury began the local branch of Triad Ladder of Hope, No Thru Traffick.

When the group first set out, it was clear that the community was unaware that human trafficking is a local issue, Weber says.

“But each time we set up a table in our community to raise awareness, we began to see that people were really beginning to understand,” said Weber.

“Every one of our 911 telecommunicators is trained in human trafficking awareness,” said Sherry Earnhardt, task force and Triad Ladder of Hope member, and supervisor for Rowan County 911 responders.

Within the first week of training her 911 operators, a human trafficking victim was recognized, Earnhardt says.

Food Lion served as the lead sponsor for the event, with other local businesses contributing food, flowers and silent auction items ranging from horse riding lessons to NASCAR pit passes.

“It will take everyone to fight this crime,” said Triad Ladder of Hope board member Kimberly Pross.

“No task is too small or too unimportant, and it certainly does take a village,” Pross said.