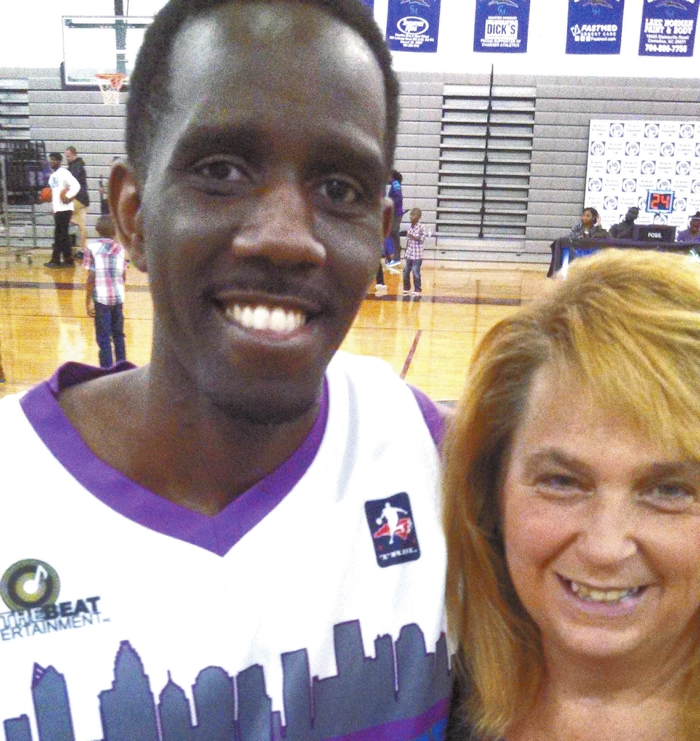 The story  in the Jan. 2 edition of the Salisbury Post about 36-year-old basketball player Tony Propst’s comeback from broken bones, blood clots, gunshot wounds and being run over by a car, generated an unusual amount of response.

Many remember Propst from his days as a teen athletic star at South Rowan High, and many, just appreciate Propst, a family guy who has kept smiling through dark days.

One of the people who read about Propst making the roster of the Charlotte Elite basketball team was Rev. Don Safrit. He immediately put in a call to his daughter-in-law, Patti Safrit.

“You should read the story in the Post,” he said. “It’s about a jogger who was hit by a car.”

“Oh, I don’t know, that would bring back terrible memories,” Patti said.

“You really might want to read the story,” Don restated.

“That’s when I realized the story was about my jogger — my Tony,” Patti said.

It happened more than a decade ago, but Patti still gets a chill when she drives down Mt. Hope Church Road. That’s where her life intersected with Propst’s for the first time.

Propst was 25 then, a college student and aspiring basketball player at Johnson C. Smith. He’d already overcome serious obstacles, but  he was competing with 20-year-olds for a roster spot, so he was doing extra jogging every day. Just a mile or two.

The Safrits had been visiting relatives. Patti and her husband, Lewis,  were headed for home in separate vehicles, barely a minute apart, with Lewis ahead of his wife. She was piloting a Volkswagen Beetle. He drove a four-wheel-drive Chevy truck.

It was the middle of the afternoon. Lewis saw a young jogger stretching, preparing for his run.

Propst was in motion by the time Patti crossed over railroad tracks, crested a hill and spotted a runner.

“Tony was on his side of the road, running against traffic, doing what he was supposed to do,” Patti said. “Then I saw a dog coming at him,  a huge German Shepherd.  I saw him look at that dog and then he took this huge step toward the middle of the road, trying to get away from it. Suddenly, he was right in front of me. I locked my hands on the steering wheel, I locked my foot on the brakes, and I closed my eyes.”

Patti pounded the horn too, although she didn’t know that until Propst told her later that he’d heard it.

For a split-second, Patti thought she’d miraculously missed him because she saw Propst leap, trying to hurdle the small car. But then she heard a  thump, and then she saw Propst bouncing on the hood of her car and flipping through the air.

“There’s no greater horror than hearing that sound, telling you that you’ve run over a person,” Patti said.

The Volkswagen was severely damaged, as Patti brought it to a stop. Propst, lying in a field, was in bad shape. He’d broken a thigh bone, the longest, strongest bone in the body.

“You could see a bone sticking through his leg,” Patti said. “I called 911. I called my husband. He’d seen the jogger, so he knew actually who I’d hit. Tony was hurt so close to his father’s house they would’ve seen the accident if they’d been outside.”

Members of Propst’s family arrived quickly, as did an ambulance.

“Tony had the presence of mind to say, ‘It’s not her fault,'” Patti said.

Patti, her husband and sister went to visit Propst in the hospital that evening. He was in surgery. A host of concerned family members awaited news.

“No one was ugly or rude to us, but there definitely was tension when they found out who I was,” Patti said. “I asked if I could say a prayer, and Tony’s mother said that would be fine. I prayed, and then they started praying with me. When we finished, all the tension was gone.”

When Propst was conscious, Patti was allowed to see him. She identified herself with, “I’m the lady who hit you.”

Propst’s response stunned her. He sat up in bed, reached out his arms and hugged her.

Patti  stayed in touch with the Propst family for a year or so after the accident,  checking on Tony’s progress. She had no idea Tony was an athlete. All she knew was he was a college student. She heard he was walking with a cane, but he was getting better.

Busy lives moved on, and Patti and the Propsts lost touch.

At least, they lost touch until Patti read about Tony’s basketball comeback and resolved to go see him play. The Charlotte Elite plays home games at Concord’s Cox Mill High. Patti made the trip last Saturday.

“I drove up to the parking lot, and a  woman was getting out of her car at the same time,” Patti said. “She asked who I was there to see and I told her I ‘d come to see Tony Propst.”

The woman laughed because the woman happened to be Tony’s wife, Nakia Rhyne Propst. At first, she thought Patti was one of  Tony’s schoolteachers, but then Patti explained her rather unusual connection with Tony.

So Patti met Tony’s daughters and watched Tony play basketball. She was amazed at how fast he was.

“After the game, I went up to Tony and I asked him if he remembered that lady who hit him with a car,”  Patti said. “He did the same thing he did in that hospital bed. He gave me a hug.”

Nakia and Patti have spent time communicating on Facebook and plans are in the works for Tony to share his story with Patti’s  youth group at Unity Presbyterian Church.

Patti, who is 52 now, vows she’ll never lose touch with Tony again. The Propsts have made her feel like part of their family.

“I’m thankful now when I think about that wreck,” Patti said. “My husband and I were only a minute apart on the road. That could’ve been him hitting Tony and Tony would’ve gone under that truck instead of bouncing off my Volkswagen. It’s amazing how things work out sometimes. I believe it all happened for a reason.”