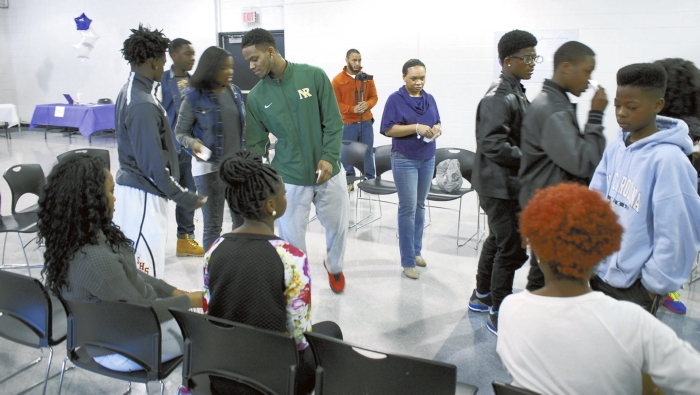 Under the watchful eye of Gemstones Academy founder Alisha Byrd, center, students seek out the person they are supposed to become friends with over the next month. Mark Wineka/Salisbury Post

SALISBURY — Months ago when city officials and community leaders were discussing challenges facing the West End, Alisha Byrd looked inward and realized she might have something to offer.

“There’s something I can bring to this center,” Byrd said she told herself. “I can do something for these kids.”

Byrd founded a  non-profit 501 3(c) corporation called Gemstones Academy aimed at students in the fifth to 12th grades. She adopted the theme “Inspired to Empower” and set about designing a program whose core values are scholarship, leadership, integrity and responsibility.

Gemstones Academy debuted Saturday at the Miller Recreation Center on West Bank Street with a two-hour orientation. For the first session, 14 students — a mix of elementary, middle school and high school kids — attended along with 10 adult volunteers and some parents who wanted to hear what the program is all about.

Gemstones Academy will meet for two hours — noon-2 p.m. — every second Saturday of the month, and Byrd said the focus is on helping the students reach their potential by giving them skills to uncover their gifts, talents and abilities. The emphasis is on leadership, education and gratitude.

Tutoring also is available from 11 a.m.-noon.

Byrd and facilitator Alex Clark led much of the  discussion with the students Saturday, using different exercises and discussions to break the ice among the participants. Clark has developed a “Compass” program for youth.

“We want to give you direction, so you can avoid a lot of potholes,” Clark said.

There will be many planned activities over the coming 11 months, such as chess instruction every session, a CIAA Education Day for middle schoolers in February, golf in May, community service at places such as Rowan Helping Ministries, the creation and design of T-shirts and a black-tie gala in December.

But Gemstones Academy also is creating a support system among the students . It started Saturday with the students pairing off by drawn numbers and getting to know each other in one-on-one sessions. Byrd said the new “mates” will be asked to communicate weekly with each other through emails, Facebook, text messages and telephone calls.

“I want you guys to keep this going on,” she told the kids.

As a group, Byrd added, the Gemstone Academy participants also will try to support the students involved in sports or in activities such as dance recitals.

“We’re a village, for real,” Clark said. The program wants to surround the kids with love from their peers, parents, mentors and elders, he added.

Byrd said there will be a heavy focus on respect, gratitude and learning the proper etiquette. A reason the academy wants to introduce the students to golf, for example, is that it’s a game of respect and etiquette. The black-tie affair in December also will showcase what the students have learned in terms of manners.

Byrd has asked the students to address the adult volunteers as Mr. Mrs. Miss, Aunt or Uncle, depending on the preference. Byrd’s “B’s” for the students are be responsible, be polite and courteous, be respectful, be on time and be prepared.

Paris Gladden, a fifth-grader at Koontz Elementary, said she hopes the program helps her with her shyness. A parent at Saturday’s orientation encouraged Byrd to consider instruction in public speaking.

“I think a speech class would be wonderful,” the parent said.

Every session ends with the students filling out a slip of paper describing what they are thankful or noting what person made their day better. The notes go into a “gratitude jar” and are shared at the next meeting.

Byrd also is asking the students to keep a daily journal. In addition, she plans to create a “Who’s Who Dictionary” of all the participants and promised they would be co-authors with her on a book, because she plans to use their answers to the questions, “What is your beautiful?” and “What is your swag?”

Byrd, who works at Freightliner, has self-published two books, including one titled, ‘Gemstones,” written for teenagers.

During the orientation, Clark asked for the leaders among the students to stand up. Only a couple of kids did. Clark then instructed all the kids to stand because he expected them all to be leaders.

“What leaders do,”he said, “is lead by example.”

Boy drowns after falling into pond at Hurley Park