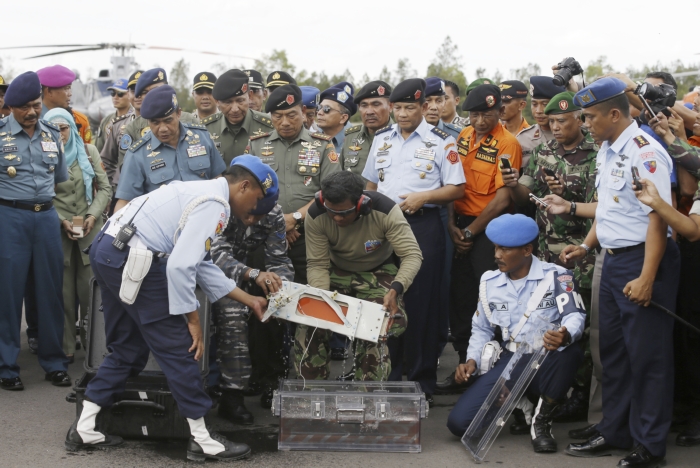 Indonesian air force and Indonesian navy personnel hold one of the black boxes of the ill-fated AirAsia Flight 8501 that crashed in the Java Sea, at airport in Pangkalan Bun, Indonesia, Monday, Jan. 12, 2015. Divers retrieved one black box Monday and located the other from the AirAsia plane that crashed more than two weeks ago, a key development that should help investigators unravel what caused the aircraft to plummet into the Java Sea. (AP Photo/Achmad Ibrahim)

The search for accomplices to the Paris attacks is urgent because “the threat is still present,” says the French prime minister.

In the wake of the attack, the community faces calls from Israeli leaders to immigrate to the Jewish state, but a number feel ambivalent about leaving.

This is a key development that will help investigators unravel what caused the aircraft to plummet into the Java Sea.

4. HOW OBAMA CHANGES HIS ECONOMIC MESSAGE

No longer tempering his pitch, the president gives assurances that “American resurgence is real.”

5. WHO ECLIPSES U.S. AS IRAQ’S ALLY IN FIGHT AGAINST MILITANTS

It’s Iran, which most Iraqis credit with stopping the extremists’ march on Baghdad.

Security is tight, part of a countrywide effort to boost safety measures in the wake of the Dec. 16 attack in Peshawar.

7. WHAT MAY HELP OBESE PRESCHOOLERS SLIM DOWN

During a year of Head Start program, overweight children were much more likely to shed extra pounds than comparison groups of kids, a new study finds.

Among other edgy productions that deserved recognition are “The Grand Budapest Hotel” and “Birdman.”

With the introduction of a $30,000 Chevrolet, the company would set up a showdown with Silicon Valley’s Tesla Motors.

Boy, 8, dies after falling through ice at Hurley…