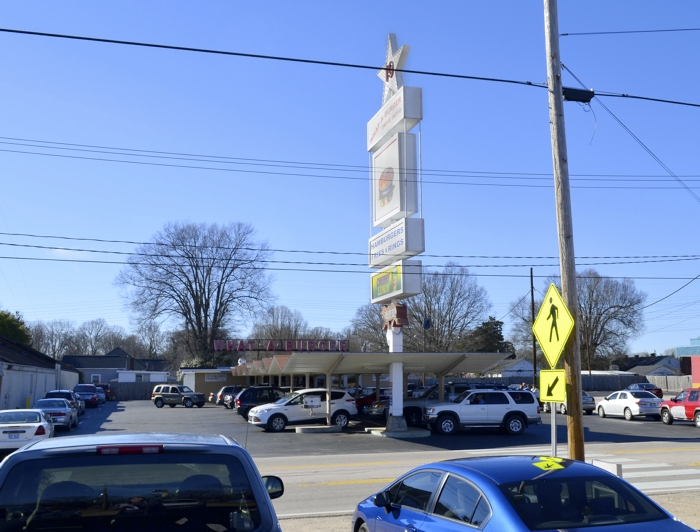 KANNAPOLIS – Since What-a-Burger No. 10 opened its doors on South Main Street in 1964, a lot of things have changed in the world.

The trees that are young in a December 1964 photo are huge today. Nearby homes have been replaced by businesses.

And the city once known for its textiles is now a biotechnology hub and a NASCAR tourist destination.

But before hometown hero Dale Earnhardt, Sr. was old enough to drive, What-a-Burger was cooking up burgers in the Midway community.

And before TV shows like “Happy Days” had made the drive-in hamburger stand an American icon, that big, lit-up sign on South Main Street was a rally point for date nights and downtown drives.

The towering sign doesn’t spin anymore, and the days of the 35-cent hamburger are long gone.

Still, as What-a-Burger No. 10 marks 50 years of serving homestyle hamburgers and more, despite the many changes around it, the drive-in is many locals’ link to the “good ol’ days.”

The Concord-based What-a-Burger chain was founded by C.W. Bost in 1956, following on the heels of the Bosts’ success selling burgers at a local diner.

“They were selling What-a-Burgers there by about 1955,” said Lonnie Riffle, What-a-Burger’s general manager, who previously managed the Kannapolis restaurant.

Over the years, What-a-Burger – not to be confused with a similarly named chain based in San Antonio, Texas – grew to include locations in Albemarle, Salisbury and elsewhere.

Time and tradition have kept the original store numbers in use, and the Midway community’s What-a-Burger wears #10 proudly on its sign.

Photos in the Kannapolis History Associates’ archives, taken around the time the restaurant opened in 1964, showcase the specials: a quarter-pound hamburger for 35 cents, and half a fried chicken or a shrimp dinner for less than a dollar.

In his 28 years with What-a-Burger, Riffle said, he’s spent a lot of days and nights serving up burgers and fries, along with some staffers who’ve made the Kannapolis What-a-Burger their career.

“In the old days, we were open till 1 at night,” Riffle said. “Number 10 always did a good business, and for me, I feel like it was because of the way we ran it.”

Not only friendly staff and good food, Riffle said, but a good location.

In those days, Plymouth Street connected with South Main across the railroad tracks right in front of the What-a-Burger.

No. 10 served the nearby Cartown community and workers from Cannon Mills Co. – not to mention crowds of hungry teenagers.

“We’ve always tried to have a good product,” Riffle said. Today, What-a-Burger still uses a North Carolina-based distributor for its food, he said.

Even as food prices have gone up, the drive-in has kept its costs on par with national fast-food chains.

And Riffle said the high quality, and customers’ praise by word of mouth, keeps them coming back for more.

Pete Stamper is manager of No. 10 today. He started working for What-a-Burger about 23 years ago, he said. After working with another company, he came back to work at No. 10 three years ago.

Stamper said the key to What-a-Burger’s success is the quality of the food, and the low price. The burgers there, he said, “are closer to what you’d make at home” than those served at big fast-food joints.

A lot of people would tell you a trip to the What-a-Burger isn’t complete without a Witch Doctor, the sweet-and-sour soda fountain concoction that’s topped off with a couple of dill pickle slices.

But it wasn’t always so easy to get one, Stamper said. In early days, the staff didn’t want to make a Witch Doctor.

It’s not clear just how the Witch Doctor was invented, or how it got its name. It might have something to do with the David Seville song “Witch Doctor” from 1958.

Stamper said he’s heard the precursor to the Witch Doctor was developed at Wink’s in Salisbury, and contained a different “secret” ingredient: onions.

No matter how it got its start – and there’ve got to be other stories – it’s still a crowd favorite.

Stamper said he has “no idea” how many gallons of Witch Doctors his restaurant serves in a week’s time, “but it’s a lot.”

“Just in Sundrop alone, we use probably 50 gallons of syrup in a week” for soda fountain drinks, Stamper said.

The rest of the menu is still much as it was in ’64: burgers, chicken, barbecue, seafood and side dishes, plus desserts.

If you walk into What-a-Burger No. 10 during a weekday lunch rush, you’ll see something like a well-oiled machine running at full steam.

With the dining room almost full and the curb service spaces nearly filled, it takes seven people in the kitchen to keep up with the steady stream of orders.

“I’m proud to be here,” Stamper said, taking a break from running the kitchen. “I’ve been around the What-a-Burger all my life.”

“When I started, the What-a-Burger was still 35 cents. With a large drink and fries, it was 78 cents,” Stamper said.

Back when the local kids used to cruise downtown Kannapolis, making laps around the stretch known as “Idiots’ Circle,” What-a-Burger No. 10 was a meet-up spot, Stamper said.

Riffle said that, when he was manager, the Kannapolis Christmas parade used to start right outside No. 10.

The folks who come back today carry those memories with them, even if they’ve been gone a while.

When this What-a-Burger was brand new, back in 1964, Susan and Gary Livengood would drive in on dates, Gary said.

When he came back to visit Kannapolis in later years – they left in ’68 when Gary joined the Army, and moved back to town in 1992 – What-a-Burger No. 10 was one of the places they wanted to go.

And they still come back for lunch, ordering the same What-a-Hamburgers and onion rings as all those years ago.

Maybe that’s the secret to why this small drive-in has survived.

What-a-Burger No. 10 doesn’t have fancy golden arches, or a playground, or a $1 menu. It doesn’t have all the frills of some of its national competitors.

From what those who go there say, it doesn’t need them. It’s still a part of their lives, and probably will be forever.

Readers reminisce about What-a-Burger No. 10

As the restaurant celebrates 50 years in business, we asked readers on Facebook to tell us about their memories of What-a-Burger No. 10 in Kannapolis through the years. Here are some of the responses we received:

My family lived in the house where the What-a-Burger No. 10 in Midway, Kannapolis stands now.

My grandfather built the house for my grandmother. I lived and grew up in that house. It was sold in 1960. There was a car lot there, and then the What-a-Burger was built. … We go to the What-a-Burger in Midway when we can.

When I moved to Kannapolis on Christmas, 1985, (What-a-Burger No. 10) was a landmark I had to look for, then turn right at the corner.

I went there that weekend. Had no idea what Sun Drop was, or a Ranchburger … but the girl at the counter said I would like them both. So I ordered it. In New Jersey, we don’t put mustard, slaw and onions on a burger, but it was tasty.

Back in Jersey many years; wish What-a-Burger was here. Happy Birthday!

When we would visit my great aunt and uncle in Shadybrook in the ’60s, we would sometimes get take-out when they didn’t feel like cooking.

I always thought the food here (was) better than the one in Concord, but it was probably just being in their company. The What-a-Salisbury was my favorite.

I now live in their house, and visit this location frequently.

My teenage mantra – Two What-A-Cheesebugers, an order of fries and a Cherry-Lemon Sun Drop to go.

I still love the food. My dad used to take my mom and all four kids. We would share fries and split burgers. I think he did it ’cause he didn’t have to get all of us out of the car.

My aunt, Susan Key, worked at this What-a-Burger for as long as I could remember (maybe 20-plus years).

Growing up in Kannapolis, I knew I could go to Whataburger and see my Aunt Susan and get something tasty to eat. I rode my bike up there, I’ve taken high school friends for a meal, and now I’ve had the pleasure of taking my wife and kids; it’s just something that is a living memory of my youth that is tangible to share with loved ones.

My aunt passed away a few years ago, but I’ll always remember her when I drive by What-a-Burger 10.

I have many fond memories of the What-a-Burger. Growing up, it was a place my grandparents and parents would take me after soccer or baseball. Mom would stop and bring home supper or when we would meet as a family, just before Christmas, before we would go visit my great grandparents …

Believe it or not, my fondest memory of What-a-Burger in Kannapolis is when my wife and I told my whole family about the pending birth of both of my children.

We got the whole family to meet us there, near Christmas, for each announcement and surprised them with the news. The boys are three years apart, and they now love eating there.

We didn’t need a fancy dinner to do that, just good old hometown food!

My Mama and I both love their hot dogs. I’ve been going there all my life. I grew up in Car Town and that What-a-Burger was a part of my childhood. I still think it’s the best restaurant in Kannapolis