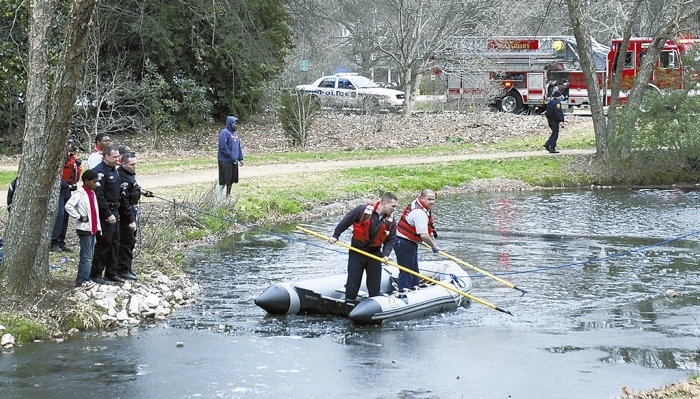 Mark Wineka/Salisbury Post Lts. Brian Sebastian and Eric Bost of the Salisbury Fire Department work from a raft,ooking for a boy who slipped under the water while attempting to walk on the ice at Hurley Park's lake Sunday afternoon. They located the boy minutes later, and CPR was immediately started.

SALISBURY — A 8-year-old boy, playing with a couple of friends, reportedly tested the ice on a pond at Hurley Park Sunday afternoon, fell in and was under the water at least 10 minutes, probably longer.

Lts. Brian Sebastian and Eric Bost worked from a Salisbury Fire Department raft, using poles to break off thin chunks of ice during their search for the boy, whose identity or condition has not yet been released.

When the firefighters found the boy, they pulled him into the raft and were quickly pulled to a bank where an EMC crew and stretcher were waiting.

“EMS, coming to you, one of the men shouted as the boy was pulled out of the water. “Go, go, go.”

A small creek feeds the pond, which is located at the end of Hurley Park near City Park.

The boy’s friends helped Salisbury Police officers in showing the approximate area where the boy had fallen in.

EMS workers started CPR in an ambulance at the scene before it headed off to Novant Health Rowan Medical Center at 3:08 p.m. The call about the boy’s falling into the water reached 911 at approximately 2:30 p.m.

Chris Kepley of the Salisbury Fire Department said the incident hit her colleagues hard. When the boy was pulled from the icy water, he was not responsive. The Post will update the story as more information is available.