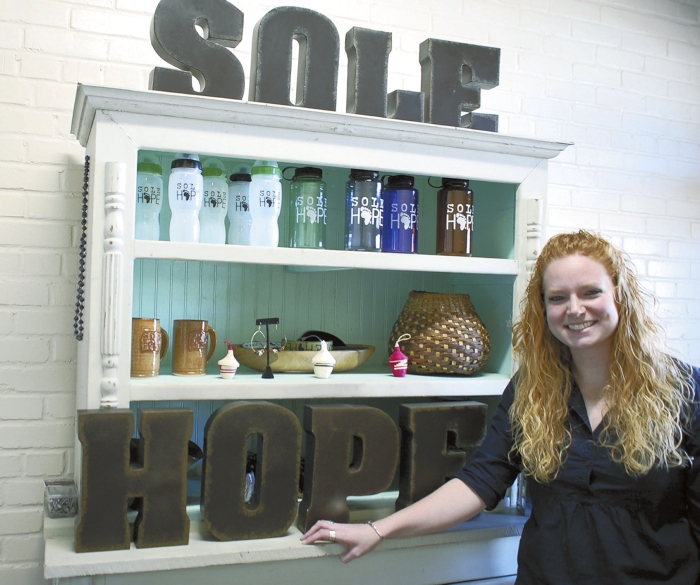 SALISBURY — Stacked in a corner of Sole Hope’s international — yes, international — headquarters at 323 N. Lee St., are a month’s worth of boxes filled with denim and plastic materials cut to specific shapes.

Every six months, Holly Jones fills a whole shipping container full of these boxes, some of which also hold medical supplies. The container goes to the Charleston, S.C., seaport and is shipped overseas to Uganda. In the East African country, local tailors and shoemakers transform the materials into children’s shoes, aimed at protecting little feet from jiggers and the foot-related diseases that come with them.

“I’m best friends with our local post office,” Jones says of the cut materials coming into Salisbury from places all over the world. “They know me.”

Last year, U.S. Office Director Jones received permission from Sole Hope founder Asher Collie and her husband, Dru Collie, to move the nonprofit’s office from Asheville to Salisbury. It was a homecoming for Jones, who grew up in Landis and is a 2005 graduate of South Rowan High School.

To say the U.S. operation runs on a shoestring budget — excuse the pun — is an understatement. The only Sole Hope employees in the States are Jones, an employee who helps to prepare things for shipping and Ashley Redburn, head of “stateside operations” in Missouri. A trio of volunteers here and about 20 Sole Hope “advocates” across the country pitch in on other tasks.

“When people call us, they think they’re getting one person in a cubile of 100,” Jones says. chuckling.

Otherwise, the Collies and roughly 30 other employees of Sole Hope are all in Uganda, working to fulfill the organization’s mission of offering hope, mainly through children’s shoes, education, medical treatment and the jobs they provide for shoemakers and tailors.

Jones, 27, describes it as a laid-back, date-night, “hey-we’re-here-come-get-to-know-us” kind of event.

Buttercup Cafe and Catering is doing the food.

“We wanted it to be a more intimate setting,” she says.

Tickets are still available and can be reserved by calling 855-516-4673, or emailing Jones at holly@solehope.org.

The Collies established Sole Hope about five years ago in Asheville, and Jones has been with the organization from the beginning — first as a volunteer. About two years ago, when the Collies decided to move to Uganda, Jones became the U.S. office director in Asheville.

A 2009 graduate of Western Carolina University, Jones lived many years in the mountains.

“The exciting part was that they allowed me to bring it with me,” Jones says. “… I wanted to come home and bring something like this to Salisbury.”

Sole Hope is unique in that Jones is trying to make it a hometown, homegrown organization with an international footprint.

Most people know Sole Hope through its shoe-cutting “parties.” Groups such as civic clubs, churches, Scouts, schools, sororities, seniors citizens and military spouses get together with piles of old jeans and plastic milk jugs. They trace patterns onto the materials and cut out the corresponding shapes.

The plastic from the milk jugs is used for heel supports. Cutouts for the standard pair of children’s shoes include 10 pieces of denim and two heel supports.

Jones says one person might typically cut out the patterns for two pairs of shoes during a party. And parties can vary greatly in size from two people to 600, Jones says.

“People like it because they can give back,” Jones says. “Their hands are working on something a child will wear in Uganda.”

A two-step process in Uganda leads to the finished pair of shoes. Tailors sew together the materials sent from the States. Shoemakers assemble the shoes, including rubber soles bought at the Ugandan markets.

“Our biggest mission is to educate the children on why they should be wearing the shoes,” Jones says.

Sole Hope suggests a $10 donation for every pair of shoes that originates at the parties, but Jones stresses that the donation is never a requirement. That $10 is not an arbitrary number. It’s the estimated cost for paying a tailor, shoemaker and for some medical supplies that can’t be shipped over.

From Salisbury, Sole Hope sends out  50 to 100 kits a week and receives the materials back for roughly 4,000 pairs of shoes.

North Carolina is probably third behind California and Indiana in the number of shoe-cutting parties held every year.

All the boxes of cut-out shoe materials and medical supplies coming from the parties have to be sorted out, repackaged and prepared for shipping. That’s where Jones’ volunteers help. With donated fabric, Sole Hope also is making some baby shoes for sale in the States, along with T-shirts and water bottles for sale online and in a gift store Jones is setting up at her North Lee Street office.

The advocates who volunteer for Sole Hope and are coordinated by Redburn handle important tasks such as giving speeches and attending conferences throughout the country. “They’re very, very important to us,” Jones says.

After Bless the Blues, Jones hopes Sole Hope can organize other events, such as a show for local artists and maybe a 5K summer run.

“This has become my passion,” she says. “I love working with others and helping others.”