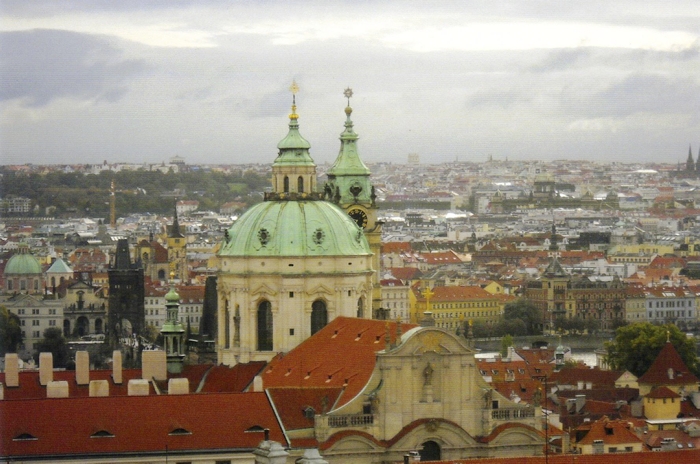 If you ever had a strong desire to immerse yourself in a foreign culture, then the city of Prague is the place to go. Prague is the capital and largest city of the Czech Republic. It is the 14th largest city in the European Union. It is also the historical capital of Bohemia.

I had the great fortune to visit this wonderful city sometimes referred to as “Golden Prague,” “Mother of Cities” and “City of a 100 Spheres.” Prague is located in the northwest portion of the country on the Vltava River. The city is home to about 1.2 million people, while its larger urban zone is estimated to have a population of nearly two million. The city has a temperate climate, with warm summers and chilly winters.

This city of Slavic legends, cathedrals, bridges, gold-tipped towers and church domes, has been mirrored in the surface of the swan-filled Vltava River for more than 10 centuries. The name Prague is derived from an old Slavic root, praga, which means “ford” referring to the city’s origin at a crossing point of the Vlava River.

Prague is home to a number of famous cultural attractions, many of which survived the violence and destruction of 20th century Europe. Main attractions of Prague include the Prague Castle, the Charles Bridge, Old Town Square, the Jewish Quarter, the Lennon Wall and Petrin Hill. Since 1992, the extensive historic center of Prague has been included in the UNESCO list of World Heritage sites.

It is quite remarkable when you consider that Prague played major roles in the Protestant Reformation, the Thirty Years War, both World War I and II and the post-war Communist era.

There is a distinct fusion of old and new architecture as well as remnants of a past communist society still present. The communist symbols/remnants of the past are not far removed from the present day progressive democracy that Prague now represents. Democracy is alive and well and is revealed in many ways in current day Prague. In fact, when I visited Prague there were several protests and demonstrations going on throughout some of the more visible and well-traveled streets. I later found out that these specific protests revolved around various university tuition and fee increases.

I visited a museum in Prague called “The Museum of Communism” which tells the story of Czechoslovakia’s years behind the Iron Curtain in photos, words and fascinating artifacts. The empty shops, corruption, fear and double-speak of life in socialist Czechoslovakia are well conveyed, and there are rare photos of the Stalin monument that once stood on the Letna Terrace (a 61-acre park) and its spectacular destruction. In 1993, Czechoslovakia separated into two distinct sovereign states, Slovakia and Czech Republic.

Although Prague is a relatively walker-friendly city, in order to see as much of Prague as possible with limited time, I decided to take a tour, much of which revolved around the Prague Castle, which is the focal point of the city.

Walking to the castle from the center of the city takes the visitor through Prague’s beautiful medieval center, which remains a wonderful mixture of cobbled lanes, walled courtyards, cathedrals and countless church spires all in the shadow of the mighty Prague Castle. This 9th century castle rises like a dream above the city offering beautiful views of the areas below. The Guinness Book of Records lists Prague Castle as the largest ancient castle in the world. The Prague Castle is the official residence and office of the president of the Czech Republic (Milos Zeman). Located in the Hradcany district of Prague, the castle has been a seat of power for kings of Bohemia, Holy Roman emperors and presidents of Czechoslovakia. The Bohemian Crown Jewels are kept within a hidden room inside it.

Located within the Prague Castle complex is a Roman Catholic cathedral named St. Vitus Cathedral. The cathedral is an excellent example of Gothic architecture and is the biggest and most important church in the country. The cathedral is the seat of the archbishop of Prague and contains the tombs of many Bohemian kings and Holy Roman emperors.

After our lengthy but inspirational visit to the castle, we then walked to the famous Charles Bridge. This historical bridge, which was built in the beginning of the 15th century, made Prague important as a trade route between Eastern and Western Europe. As the only means of crossing the Vltava River up until 1841, the Charles Bridge was the most important connection between Prague Castle and the city’s old town and adjacent areas.

The old town bridge tower, which is one of three towers protecting the bridge, is often considered to be one of the most astonishing civil Gothic-style buildings in the world. The bridge is decorated by a continuous alley of 30 statues, most of them in the baroque style, originally erected around 1700 but now all replaced by replicas. The statues depict saints and patron saints highly regarded at that time. Each statue is remarkable, each with a story and an artist who loved the story.

Walking across the bridge, I tried to imagine the amazing history that had taken place here (battles, revolts, floods, fires, etc). But besides the history, it is the quintessential view of Prague. On one side is the Prague Castle, and on the other side is St. Vitus Cathedral.

Another fascinating must-see landmark in the city is the Prague Astronomical Clock or Prague Orloj. It is a medieval astronomical clock that was first installed in 1410, making it the third-oldest astronomical clock in the world and the oldest one still working.

Old Town is a medieval settlement of Prague. It was separated from the outside by a semi-circular moat and wall, connected to the Vltava River at both of its ends.

Visiting the Old Town in Prague was truly a journey back in time. I stood in awe, absorbing all of Prague’s dramatic history and amazing architecture. With its ancient buildings and magnificent churches, this is one of the most beautiful historical sites in Europe.

The Old Town Square dates from the 12th century and started life as the central marketplace for Prague. Over the centuries, buildings of Romanesque, Baroque and Gothic styles were erected around the market, each bringing with it stories of wealthy merchants and political intrigue.

After completing my tour of Prague I certainly understood why the city is regarded by many to be one of Europe’s most charming and beautiful cities. Although Prague has a long history, it is also a modern and vibrant city full of energy, music, art, fine dining and special events catering to the traveler’s thirst for adventure. Prague has become the most popular travel destination in Central Europe, along with Vienna and Krakow.

I consider myself one of the lucky ones to have had the great pleasure of visiting such a gem of a city.