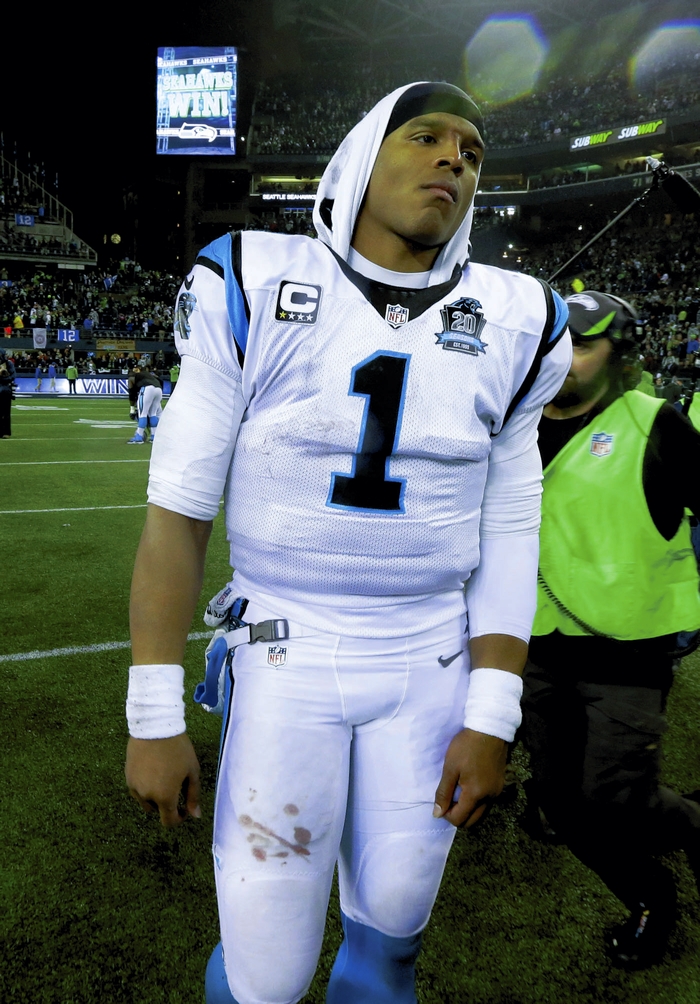 The Associated Press Carolina quarterback Cam Newton walks off the field after the Panthers' 31-17 loss at Seattle in the divisional round of the NFL playoffs.

SEATTLE — Carolina’s dream of going from 3-8-1 with four weeks left in the regular season to winning the Super Bowl came to a halt Saturday in Seattle with a 31-17 loss in the divisional round of the NFL playoffs.

Seattle advances to the NFC Championship for the second straight season. The top-seeded Seahawks square off next week with the winner of Sunday’s Cowboys at Packers game.

The door for a Panthers victory was slammed shut in the fourth quarter when Seattle defensive back Kam Chancellor stepped in front of quarterback Cam Newton’s pass intended for tight end Ed Dickson. Chancellor went 90 yards for a touchdown.

Chancellor’s calling card in this game, however, were his displays of athleticism on field goal coverage at the end of the first half.

Before the teams went to the locker room, Carolina kicker Graham Gano lined up to attempt a 35-yard field goal. Chancellor leapfrogged long snapper J.J. Jansen and narrowly missed blocking the field goal. Gano split the uprights, but it was nullified by a Carolina penalty.

On the second attempt, Chancellor again timed the snap, jumped over Jansen and appeared to block the field goal. Chancellor, however, was whistled for running into the kicker.

Gano’s third attempt, without Chancellor going for the block, was good. The Panthers trailed the Seahawks 14-10 at halftime.

Seattle got on the board in the first quarter with Russell Wilson’s 16-yard pass to Doug Baldwin for a 7-0 lead.

Carolina evened the score at 7 on Newton’s 7-yard pass to Kelvin Benjamin in the middle of the second quarter. The rookie receiver had seven catches for 75 yards and two scores.

Seattle took the lead for good in the second quarter when Jermaine Kearse made a one-handed catch and took the ball to the house for a 63-yard touchdown and a 14-7 lead.

Newton ended the game 23-of-36 for 246 yards with two touchdowns and two picks.

Running back Jonathan Stewart had 13 carries for 70 yards.