Mystery looks at the other side of philanthropy 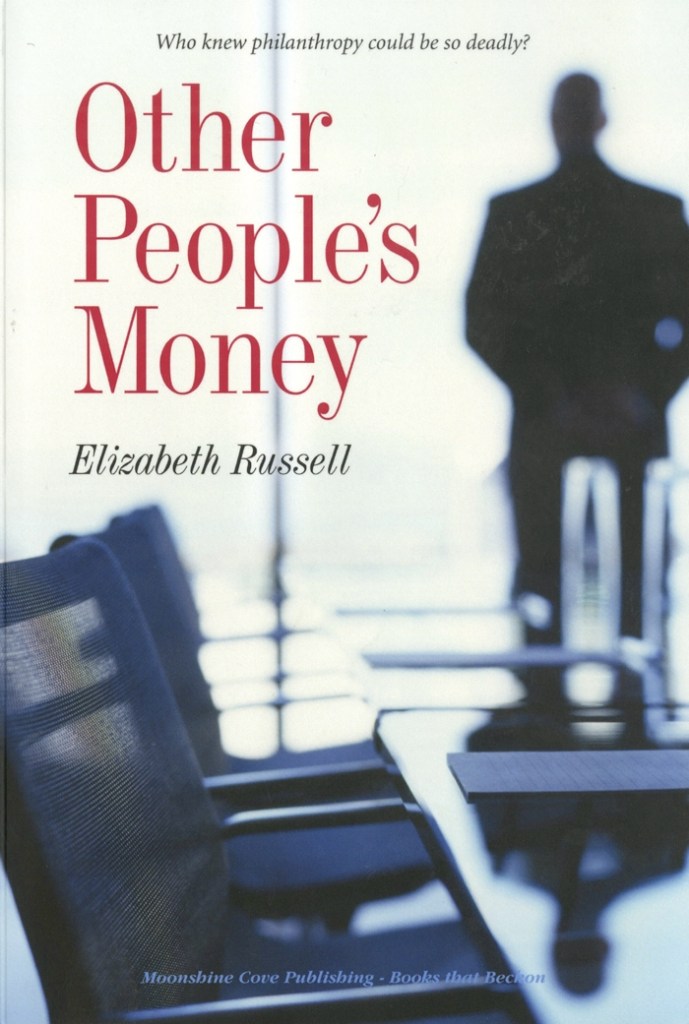 Author Elizabeth Russell will be at Literary Bookpost Saturday, Jan. 17 at 10 a.m. to sign her new book, 'Other People's Money.'

“Other People’s Money” introduces the reader to Katie Nelson, a young, somewhat disingenuous worker in the field of charitable foundations.

Katie likes to get her way, and when a proposal she has worked long and hard on is tossed into the trash, literally, she just won’t let it go.

That turns out to be foolhardy but a good thing, because Katie’s nosiness and questions help solve a crime. Her persistence nearly gets her killed, more than once, and her judgment of men needs a little work.

She is young and she’s been tossed into a big pot of money and power. She has great dreams, heartfelt convictions and a desire to save the world. She wants to make a difference and she treats this job as her ticket to success and satisfaction.

What Katie doesn’t count on is the personalities and biased opinions of board members. She doesn’t understand her place in all this. She doesn’t get to make the final decision and there’s a limited number of pointed questions she can ask.

It gets more complicated when her pet project burns to the ground and a woman dies. Katie takes it personally and vows to avenge the destruction with money from the same people who told her no.

She romanticizes the doctor who heads up the project, making the whole thing very personal.

And she’s met someone new, Jim Hunter, who is on the board of her foundation. In fact, he’s the grandson of the founder. When she finds herself attracted, she hears the warning bells, but they aren’t loud enough.

Katie is further outraged when her mentor at the foundation, Chris, asks her to drop her proposal so he can push his request for funding for a gay theater group. Katie’s losing proposal was funding Viva Latina, a clinic for women who have no health care and may not be legal.

When she sees Chris with the theater’s director, she suspects Chris may have been involved in the fire. When she finds her proposal in the trash in the board room, with obscenities scrawled across the cover page, she steals it back and turns suspicion to the chairman of the board.

Porter is a nasty piece of work — bad tempered, foul-mouthed, bigoted and a frequent philanderer.

But he’s a lawyer at a prestigious law firm in Atlanta, the same law firm where Jim works. It’s sort of surprising that someone like that would head a foundation, but author Elizabeth Russell has worked in foundations, so she may have encountered someone like Porter — surely not as bad, though.

So while Katie is falling in love with someone who is technically one of her bosses, she despises another one and looks for ways to get back at him for his rejection.

As she asks questions, she doesn’t realize how much trouble she’s stirring up, and her instincts fail her. While this reader is sure Jim is trouble, Katie doesn’t suspect it until late in the story.

She may be a bit wide-eyed and inexperienced in the world of big money, but she is persistent, and she will not let the fire or the dead woman go. She feels responsible for honoring the woman by acknowledging she existed and suffered, even before the fire.

Poor Katie doesn’t see all the clues that scream, “You’re in trouble!” But then, that wouldn’t make for a good story.

Russell really amps up the action for a climatic ending, with danger, betrayal and serious scares.

But she also leaves the reader with the assurance that this novel will be followed with more adventures in the same vein. She’s left plenty of wide openings for new developments. One hopes Katie grows up a little and turns into the smart cookie she’s called.

Russell’s English professor at Davidson College was Tony Abbott, a poet whose most recent book is “The Angel Dialogues,” and who has done a reading in Salisbury.

Russell has been a marketing and communications consultant to charitable foundations for more than 20 years. Her fiction is drawn from her insider’s knowledge of the good and the bad of the foundation world, spiced up for readers. She lived for many years in Atlanta, and now lives with her husband and two children in Asheville.

She’ll be signing books at Literary Bookpost on Saturday, Jan. 17,  starting at 10 a.m.