Leonard Pitts: Is this the end of satire? You bet 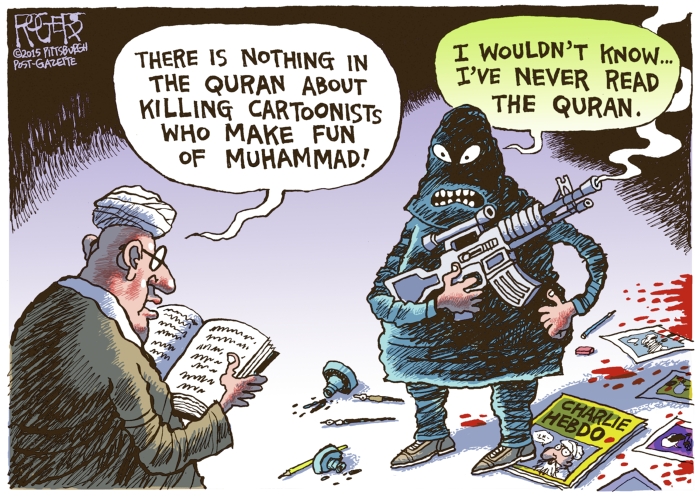 OK, you win. We surrender.

Here in the United States, as in France, as in pretty much every free place on the globe, we’ve cherished this crazy idea that people should be free to say whatever they darn well please. We have particularly believed in the power of humor, not simply as a means of expression, but as a way of puncturing the powerful and pricking the pretentious, of defying those who seek to make us fear.

But the bloodshed at Charlie Hebdo magazine forces us to realize the error of our ways. So I am here to announce that you have achieved your goal. From this moment on, no one on the planet — the entire planet, do you hear? — will ever, ever, ever again make fun of you. This is The End of Satire.

So you’ll hear no more cracks about Osama bin Gotten.

No one will ever again say you’re full of Shiite.

And you won’t have to hear anyone sing, “Bomb bomb bomb, bomb bomb Iran” to the tune of an old Beach Boys song.

I even hear Jon Stewart is quitting “The Daily Show” to host a program on The Food Network, specializing in New Jersey cuisine. Mad magazine is going out of business and its famed mascot, the infidel Alfred E. Neuman, just became the latest journalist beheaded by ISIS. Bill Maher is teaching religious studies in Mississippi, Lewis Black is practicing Zen Buddhism and Stephen Colbert now claims “Stephen Colbert” was nothing more than a character he played.

You know, this isn’t easy for us. In America, we have a tradition, stretching from Mark Twain to Will Rogers, to Dick Gregory to Norman Lear to the aforementioned Jon Stewart, of using humor to make trenchant political points. Probably, the French have a similar tradition.

But we finally get what you’re saying: Allah don’t play that.

And not just Allah. Back in December, North Korean leader Kim Jong Un threatened “merciless” retaliation over “The Interview,” a (by all reports) silly comedy about two idiot American journalists who are asked to assassinate him. The FBI says a devastating cyberattack on Sony Pictures, which released the film, originated in that hermit kingdom.

Take all that in conjunction with the 2006 riots after publication of cartoons depicting the Prophet Muhammad, the 2010 threat of a fatwa against “South Park,” a 2011 firebombing at Charlie Hebdo, and last year’s crackdown on Bassem Youssef, host of an Egyptian version of “The Daily Show,” and one thing becomes clear:

While we’ve fought forces of corruption, hypocrisy, totalitarianism and terror with reason, sanctions, humanitarian pleas and even violence, it turns out that what they really hate is when you laugh at them.

So, OK, message received. We won’t laugh at you again, ever, ever, ever. You win.

Indeed, I propose a new law: One may no longer place one’s tongue in one’s cheek under penalty of death. I’m also voting Boko Haram for school board. And from now on, no more pork on my fork. Do you know where I can get a deal on a burqa for my daughter? The one I’m pulling out of college immediately? Oh, and you’ll be happy to hear I’m growing my beard out and I’ve ordered my wife to grow one, too, just to be on the safe side. She says she can’t, but I’ll bet 40 lashes will make those follicles of hers think twice about their defiance.

Yes sir, satire is dead, and you killed it. Trust me. From now on, we will treat you only with the respect you deserve.