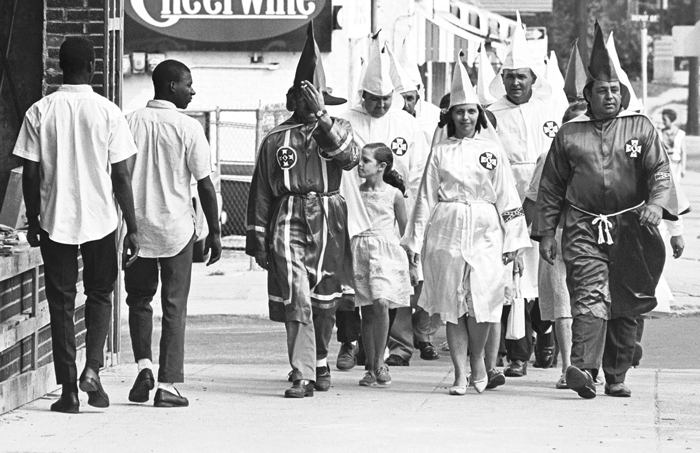 SALISBURY — The son of a railroad worker, Bob Jones dropped out of high school and later was discharged from the Navy for refusing to salute a black officer.

He tried various jobs — awning salesman, brick layer, lightning rod salesman, Nothing in his background suggested he had the organizational skills to become the most successful grand dragon of the Ku Klux Klan in the country.

But working tirelessly across the state, Jones grew North Carolina’s membership in the United Klans of America from a handful of acquaintances in 1963 to some 10,000 people three years later. He lived and based the state’s Klan operations out of his home in Granite Quarry, with his wife, Sybil, assisting in the operation.

A sign outside their Granite Quarry home identified it as “The Dragon’s Den.”

Jones is the central figure in a documentary airing on PBS from 9-10 p.m.Tuesday when  American Experience presents “Klansville, U.S.A.” Produced and directed by Callie T. Wiser and based in part on David Cunningham’s book by the same name, “Klansville, U.S.A.” particularly reports on the rise and fall of the Klan during the civil rights era of the 1960s.

Several people with Salisbury and Rowan County connections are interviewed as part of the program, including Price Brown Jr., who was a Salisbury Police officer in the 1960s; Ned Cline, a young Salisbury Post reporter then, who would later become managing editor of the Greensboro News and Record; and Dr. Gary Freeze, professor of history at Catawba College.

Jones relished the notoriety brought to him by his Klan activities — the street walks, rallies, newspaper interviews, Congressional hearings and, ultimately, his 10 months in federal prison.

“The short version of Bob Jones was, he was pretty much of a blowhard,” said Cline, who covered Klan activities extensively for the Post from 1965-70. “He loved to talk. He loved the attention.”

Cline thinks Jones’ role as grand dragon was more of an economic thing than anything else. Jones was a man of few skills and limited education, Cline said in an interview with the Post last week, but he saw the Klan as a way to gain attention, earn money and feel good about himself.

In large part, “Klansville, U.S.A.” looks beyond the racist vitriol and cross-burnings common at Klan rallies to examine why the KKK gained so much traction in North Carolina during a time it was viewed as one of the more progressive Southern states.

The Klan’s roots go back to Pulaski, Tenn., in 1865, when whites dressed in robes and posed as Confederate officers back from the dead to terrorize freed slaves.

The movie “Birth of a Nation” glorified the Klan and led to the KKK’s resurgence in the 1920s. In 1925, some 50,000 Klan members gathered for a rally in Washington, D.C., and at its height, the Klan claimed a membership of 4 million, said to have helped in the election of at least 10 governors.

Violence and scandals undermined the organization and led to its falling out of favor. The 1954 Supreme Court ruling that said public schools must integrate proved to be an opening salvo in the civil rights movement and also a spark for a rebirth of KKK activity.

By the early 1960s, there was a class of lower-income whites — people such as Bob Jones — who felt as though they weren’t being represented. In North Carolina, they viewed state leaders as not resisting the moves toward integration strongly enough,

They also feared they were being left behind, while blacks were progressing and moving into jobs that used to be or should have been theirs.

The KKK became an answer to this class of whites who felt disenfranchised. In the summer of 1963, Jones petitioned the United Klans of America, based in Alabama, for a charter to organize North Carolina, and by Aug. 17 of that year, he was chosen as the group’s grand dragon.

Jones’ father had been a Klansman in the 1920s, and his mother reportedly had marched in a Klan parade when she was seven months pregnant with Jones, who was born in 1929.

A week after the civil rights march in Washington and Dr. Martin Luther King Jr.’s “I Have a Dream” speech, Jones organized a rally in a Rowan County cornfield which drew 2,000 people.

Jones realized then, the story goes, that he could take this show on the road, and he spent the next several years criss-crossing the state, holding rallies, organizing street walks and signing up dues-paying members.

Jones claimed he was putting 100,000 miles a year on his car, setting up “klaverns” across the state. By 1966, North Carolina was thought to have 200 organized klaverns, more than all other Southern states combined.

As another way to raise money, Jones also was selling robes to male Klansmen and women in the Klan’s ladies auxiliary.

By the summer of 1964, scores of Klan rallies were being held in cow pastures and cornfields. They started out with the feel of a county fair, complete with music, hot dogs, raffles and barbecue. But the tone of the gatherings usually changed as darkness settled in and the racist speeches were made.

George Dorsett, chaplain for the N.C. order, became known for his fiery speeches and his ability to persuade his audiences that desegregation was a threat to their way of life. Sybil Jones also was as featured speaker.

In his book, Cunningham said Sybil often gave the most militant talk, attacking usual Klan targets such as communists, the federal government and “the Jewish cabal that lay behind the civil rights movement.”

Sybil Jones also challenged the men at the rallies to step up from behind their wives’ petticoats, reinforcing the message on the Klan’s bumper stickers: “Be A Man — Join the Klan.”

Each rally ended with the burning of a cross, upwards of 60 feet tall, and the singing of “The Old Rugged Cross.”

By the summer of 1965, blacks in North Carolina were becoming increasingly incensed by the Klan’s public demonstrations of racism.

Brown, the Salisbury police officer, recalled for the Post — and the documentary — a summer street rally of the Klan in 1965, when things were growing tense between the the Klan marchers and a group of black citizens who had gathered near Lee Street.

A lot of words were going back and forth between the groups.

“I was concerned and, really, sort of scared,” Brown told the Post.

Brown described it as an extremely hot day. Out of nowhere, he said, thunder and lightning hit, and the sky opened up with a rainstorm that sent everyone home.

“Something greater than we were came up and stopped it for us,” Brown said. “You looked up in the sky and said, ‘Thank God for this.’ ”

Brown retired in 2000 after 36 years with the Salisbury Police Department. He said Jones often would stop and talk with him and fellow black officer Albert Stout at the Square. The conversations were always friendly, he added.

Freeze said the Klan’s resurgence in the 1960s came at a time when an industrial boom in North Carolina was expanding the employment base, creating new opportunities and competition for jobs.

The community colleges and university systems were growing rapidly, and with the introduction of economic prosperity also came the sense of social possibilities. North Carolina was transitioning from an agrarian, cotton mill-based economy to a whole new way of doing things.

People such as the lower-income whites drawn to the Klan felt threatened by the changes, Freeze said.

“That certainty was no longer there,” he said. “It was falling apart. They didn’t know that. They thought they were holding their place in it, but it’s a deeply, deeply complex subject.”

What was being imposed on North Carolina and its agrarian tradition was a new urban order, and it smacked many North Carolinians in the face, Freeze said.

“Bob Jones fits the model of marginality and struggle,” he added.

As as reporter, Cline developed good contacts within the FBI, which had infiltrated the Klan as it grew into a more visible force. Jones was hoping the Klan could become a political force in the state,

Cline said Jones was really a talker and not a doer when it came to the violent side of the Klan.

But Cline himself received threats from the Klan in the form of telephone calls and visits to his house by Klan members. “I kept doing what had to be done,” he said.

Cline was appreciative of the support he had from the newspaper “for allowing me to go after that group,” he said.

“They never once said ‘no,'” Cline added. “It’s interesting that a small newspaper in a Southern town would allow the kinds of stories the Hurleys (owners of the Post back then) let me do. … I’ve always been proud of that.”

As quickly as the Klan grew with Jones at the helm, its fall seemed to come just as fast.

Many things contributed. At a May 15, 1965, rally covered by CBS Reports, the Klan lost some support when its N.C. leaders welcomed and held up as heroes three Klansmen from Alabama charged with killing a white civil rights worker from Detroit.

The FBI also started watching Jones and the Klan more closely, relying on informants such as Dorsett, the state chaplain who became suspicious of Jones’ handling of finances.

Congress also got involved, and when Jones and other Klan leaders invoked the Fifth Amendment while testifying before the House Un-American Activities Committee in October 1965, their actions were resented by the rank-and-file back home who associated invoking the Fifth as something communists would do.

They started wondering what Jones had to hide.

Jones eventually went to prison in March 1969 after being found guilty on contempt charges for refusing to provide the Klan’s financial records to Congress. He served his short sentence in a federal prison in Connecticut.

But by the time of his release, the Klan he had built in North Carolina was splintered and in disarray.

Jones would live out his days in Rowan County. He ran unsuccessfully as a Republican candidate for the N.C. House in 1974 and later worked for a truck and service company. He belonged to local American Legion and VFW posts.

Jones died April 16, 1989, at the age of 59. Sybil Jones, who was an unsuccessful candidate for clerk of court in 1966, went on to own a day-care center in eastern Rowan County and later worked for Collins & Aikman Corp.

Was Bob Jones’ rise to prominence with the KKK a sorry chapter in Rowan County’s history?

While sad episodes and deplorable behavior happened during this era, Freeze said, “this kind of tension is with us all the time.”

“The real story here,” Freeze added, “is all the people who acted out of bravery.”

Freeze, who teaches a Southern history class, will be showing “Klansville, U.S.A.” to his students. The class also will be watching “Selma,” a civil rights-related movie released last week, and “Gone With the Wind” will serve as a basis for the students’ research project.

Brown, who retired as a lieutenant and watch commander with the Salisbury Police Department, says when he recounts for kids today how things were 50 years ago, “they don’t have any concept.”

He tells them, “Yeah, all of this happened during my lifetime, and I’m trying to get you to see the things you’re doing now. People worked too hard for you to blow it.”

Not the county’s proudest moment