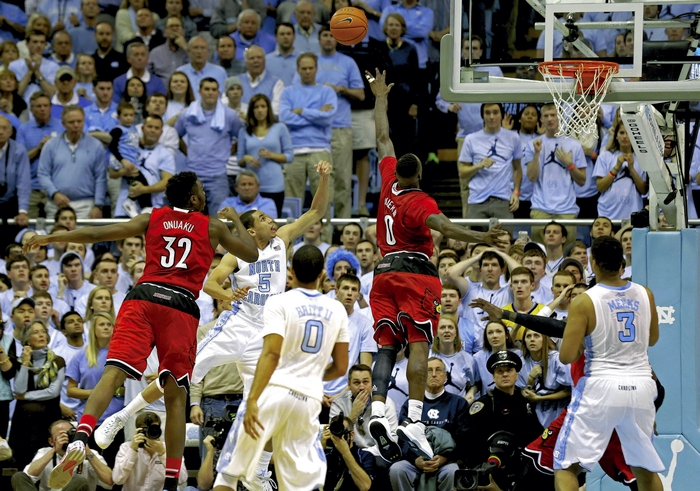 CHAPEL HILL (AP) — Marcus Paige ignored the pain in his twice-injured right foot, put his head down and drove toward the rim.

He sent a shot high on the backboard that dropped through the net, giving No. 18 North Carolina a comeback win that might also jolt the preseason all-American out of his slow start to the season.

Paige’s scooping layup with 8.5 seconds left capped UNC’s comeback from 13 down in the final 8½ minutes to beat No. 5 Louisville 72-71 on Saturday.

Paige, also the preseason Atlantic Coast Conference player of year, missed a tying 3 late in a December home loss to Iowa, then missed two shots in the final 10 seconds of Monday’s 71-70 home loss to No. 13 Notre Dame. His scoring and shooting percentages are down from last season, when he made a habit of turning in big second-half performances.

But he came through for the Tar Heels (12-4, 2-1) despite missing part of the second half when he rolled his right ankle, the same foot in which he’s battling plantar fasciitis that limited him in recent practices.

“There was no way he would sit back and watch and just allow his team to play without him,” teammate Nate Britt said. “I knew he was going to tough out whatever pain he was going through.”

Louisville (14-2, 2-1) looked headed for a 3-0 start in its new ACC home when it couldn’t miss after halftime and built its big lead. But the Cardinals went cold and committed turnovers that helped UNC re-charge its home crowd and build momentum.

The Cardinals had two shots for the win, a 3-pointer from Wayne Blackshear and an off-balance stickback attempt from Terry Rozier that hit backboard and rim on the wild final-play sequence.

“We’re playing very good basketball, I’m excited,” Louisville coach Rick Pitino said. “But also we’re hurting very much right now. It stings as much as any game I’ve coached. Our players are very hurt by it. But this is the ACC. There are going to be a lot of games like this.”

UNC: The Tar Heels improved to 4-2 against ranked opponents. … They took a 40-30 rebounding advantage, including 17-9 on the offensive glass for 17 second-chance points. … UNC shot 52 percent after halftime. … This was the first time UNC has played consecutive one-point games since the 1981 ACC tournament.

Brice Johnson led the defensive effort on Harrell and finished with a double-double (11 points, 11 rebounds). He also scored in the lane with 38.1 seconds left for a 70-69 lead, UNC’s first after halftime.